...And the Cow Jumped Over the Moon 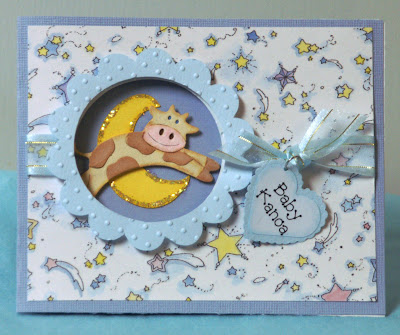 Made this window card to send to dh's cousin who recently added a new member to their family. Baby Kanoa's card was created with lot of "old stuff" that I had stashed away and never had a chance to use. 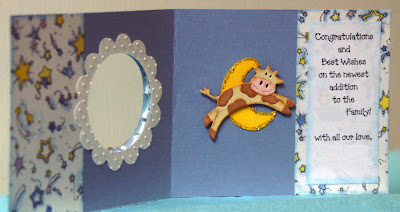 Always feels good when that happens, somehow it makes me feel like I've justified my incessant need to buy stuff all the time . The cow and moon cuts are from old Sizzix sizzlit dies that I dusted off and finally got to use for the first time, and the star patterned paper is really old Frances Meyer paper that I had bought eight years ago when I was putting together scrapbook pages of dd's 16th birthday party. Lol, I really need to learn to resist buying so much paper! Circle window and scalloped circle borders were cut with Nestabilities. The scalloped borders were then embossed with the Cuttlebug Swiss Dots folder and adhered with foam mounting tape to both sides of the window. Baby's name is computer generated (DJ Inkers font) and cut with heart and scalloped heart punches. I then attached a little jump ring to the tag before threading it through and tying the ribbon so it could dangle freely off the card.
10 comments: 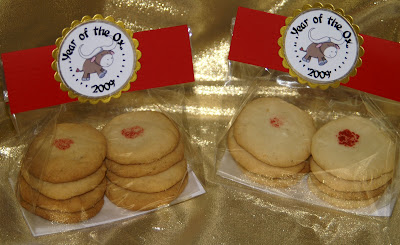 Learned how to say "Happy New Year!" in Mandarin this week by watching tutorial videos on Youtube. Yeah, I'm such a dork. "Xin Nian Kuai Le!" Learned that the phrase, "Gung Hay Fat Choy!" which I am more familiar with is Cantonese, and actually literally translates to "May prosperity be with you". Learn something new everyday! 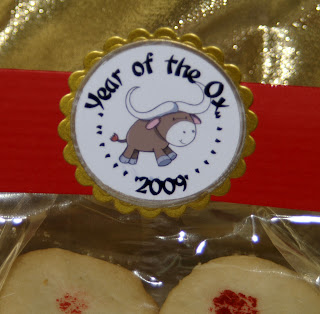 For a Chinese New Year treat, I baked a batch of dh's favorite almond cookies (that's about as Chinese as my cooking gets) to pass out to his family at our celebration dinner. Wanted the cookies to look presentable, so I packaged them in cellophane bags sealed with my old Seal-A-Meal bag sealer. For the bag topper, I used a cute little ox image I found on the internet at a children's craft site called Activity Village. You'll be delighted to find lots of neat activities and cute images on this site geared for children but great for the little kid in all of us. They even have li-si that you can print up and make...the best part is, it's all free! I added the "Year of the Ox" and "2009" to the ox image using a circle template in Microsoft Word, then printed them out on glossy photo paper. Used my Nestabilities dies to cut out the circles and scalloped circles and attached them to the red cardstock topper. Very easy.
5 comments:

A Piece of Cake! 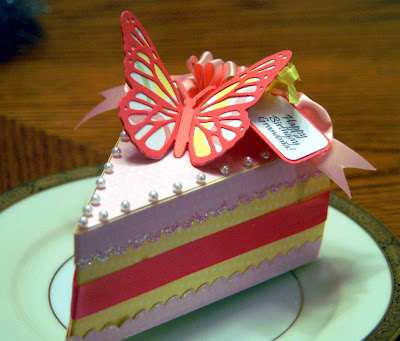 Several months ago, one my of favorite Cricut inspiration sites, Bitten By The Bug had a challenge using the cake box from the Tags Bags Boxes and More cartridge. The designers did an awesome job with it and I promised myself I'd try one too. Found the perfect opportunity recently when it came time to wrap up my mom's birthday gift. I had waited till the last minute (as usual) and found myself in a predicament without a card or even a box to wrap her ring in. Remembering the beautiful creations from the cake box challenge, I decided I could probably get away with just adding a tag to the box if I made it purty enough, since I really didn't have time to make a card. 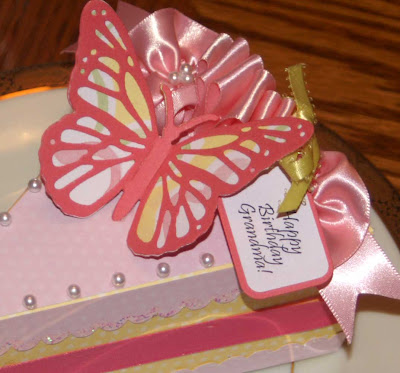 Using Design Studio, I sized and cut the cake box to as large as I could get it, to fit on a 12 x12 sheet of Bo Bunny dotted cardstock. After that, all I had to do was embellish. The butterfly is a Quickutz Revolution die, and I used decorative scissors to cut the scallop border. Added satin ribbons, pearls and glitter to finish it off. Got it done just in time, and thought it turned out not bad, considering that it was such a rush job. Definitely want to try to do more of these when I have more time to play.
10 comments: 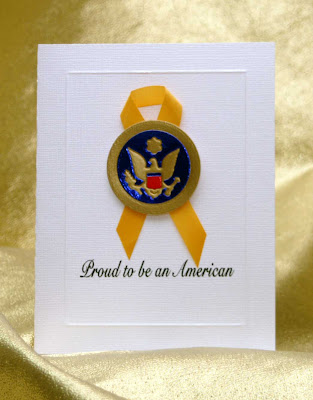 Just before the holidays last year, we learned that one of dh's cousins had received word that he would be deployed to the mideast for the next six months. The news was unexpected, and I'm sure he and his family must have been disappointed that he would be so far away from home during the holidays. But this young man kept such a spirited and positive attitude that I couldn't help but feel proud and fortunate that we have such good men and women to help protect the American Dream. I created this simple card to let him know how much we admired his bravery and wishing him godspeed and a safe return home.
I used the scor-pal to score a simple rectangular border on Bazzill diamond bling cardstock for the base of this card. I used metallic blue, red and currency gold cardstock to cut the die of the Great Seal, which is part of a Quickutz cookie cutter set called "USA Collection". Added the yellow ribbon for the familiar "come home safe" symbol. The font for the sentiment is computer generated, Amazone BT.
4 comments:

Happy New Year of the Ox 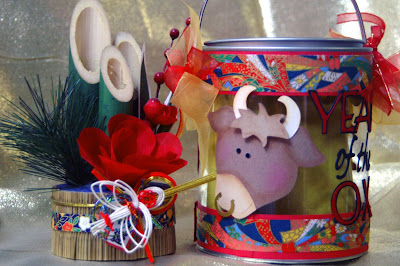 Happy New Year! According to the Chinese lunar calendar, this year, 2009, is the Year of the Ox. The actual first day of the Chinese New Year is January 26th, but I wanted to try and get a jump start since most of us celebrate the New Year on the 1st. 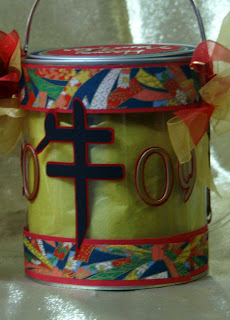 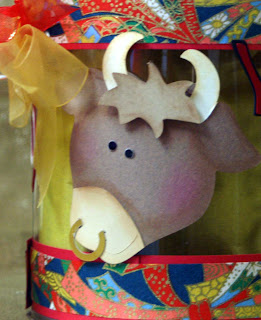 Pulled out these paint cans left over from couple Christmases back and started having some fun decorating them. Created my ox simply by using the cow from the Animal Kingdom cartridge and by adding a pair of horns and a ring for his nose using the crescent & circle shapes from the George cartridge. Font cartridges for "Year of 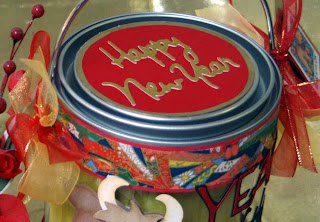 the Ox" and "2009" are George and Stone Script. The kanji symbol on the back of the can is the Chinese character for "cow", which was created in Design Studio by welding shapes from George. I used red cardstock and Japanese washi paper to do a 1" border all around the can on the top and bottom. For the lid, I used my Lion circle cutter to cut a circle from red cardstock to fit, edged it with a Krylon gold leafing pen and added the "Happy New Year" sentiment cut from Currency Gold cardstock using my new Wildcard cartridge. Finished it off with red and gold nylon ribbons knotted to the handle and added a small gift card. The cute stamp on the gift card is from Mari and Me, colored in with Copic and Berol Prismacolor pens. Really enjoyed making these for family and friends, but I only had 8 cans. Still want to make more, so I guess I'll have to check out Ben Franklin this weekend with my 40% off coupons to see if I can pick up a few more cans. 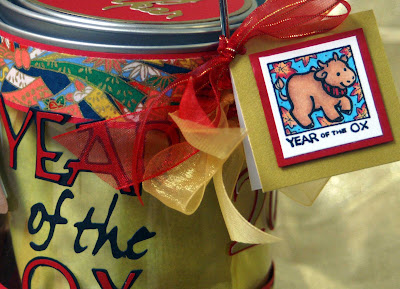