Happy Anniversary to our Favorite Couple 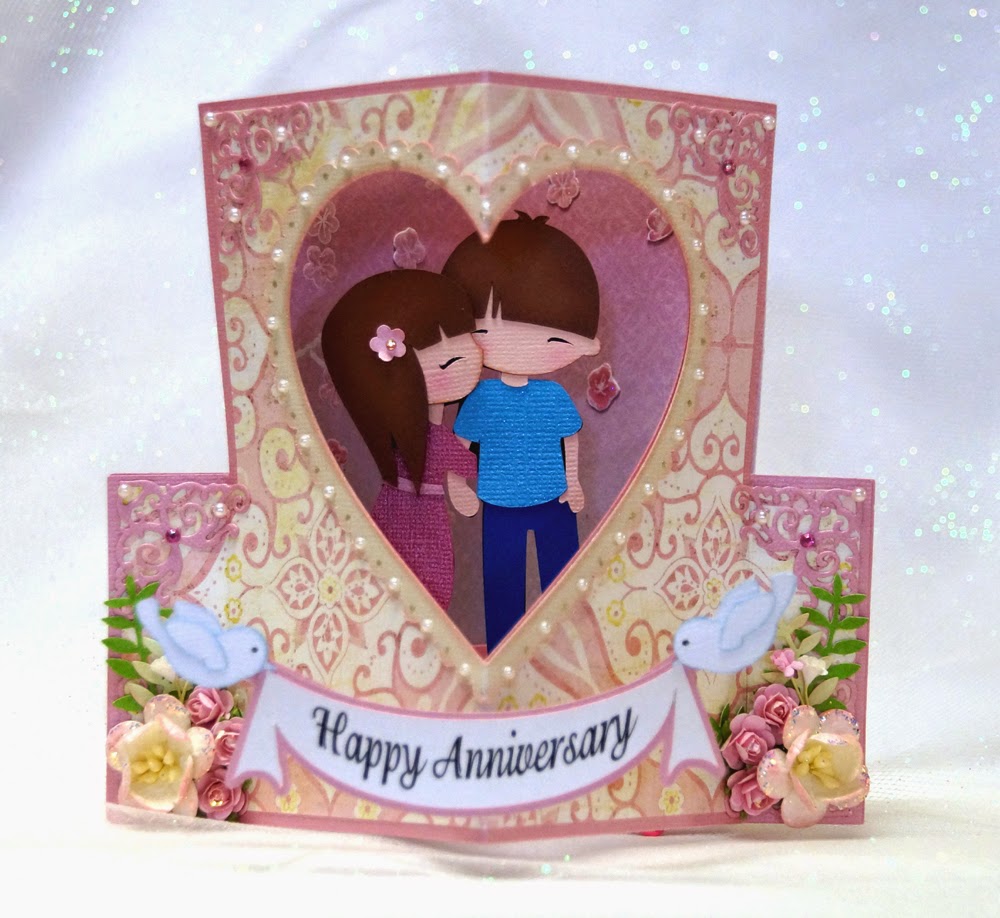 My daughter and son in law celebrated their third anniversary last month...and yup, I made another sliding box card. I was already embarrassingly late with my card before I even started, and this was the quickest "nice" card I could come up with at the time so I just went with it, this time changing the window to a heart shaped one. 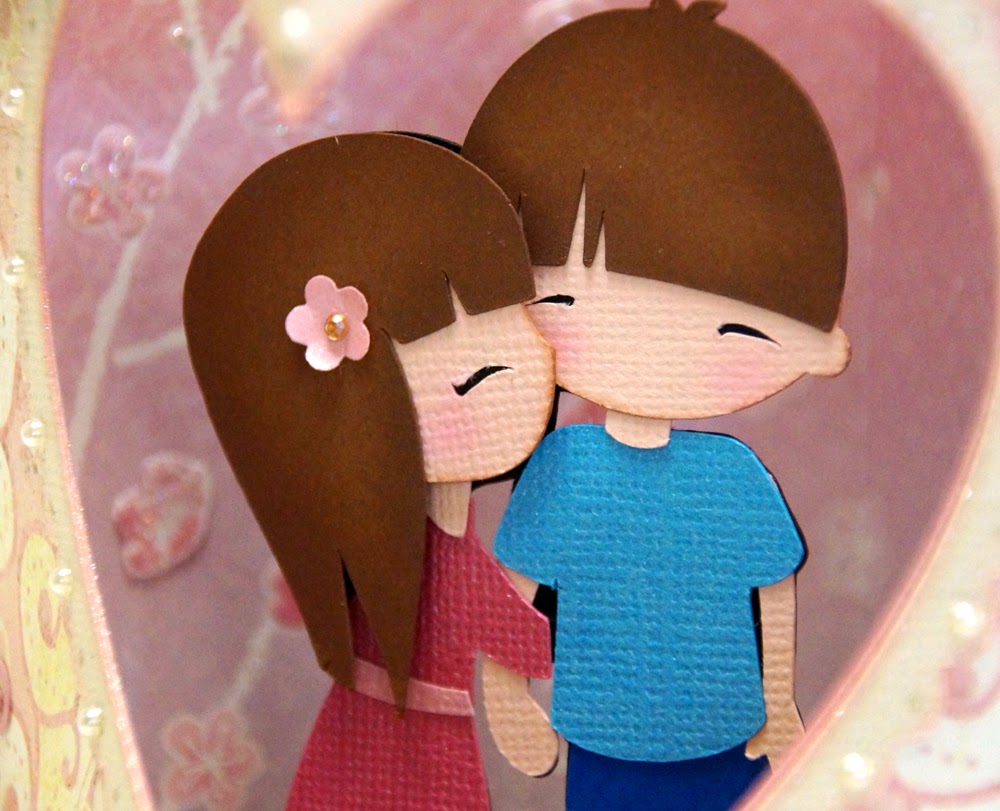 On the inside, I used a cute boy and girl paper piecing file called "Kissing Booth" from SVG Cutting Files. 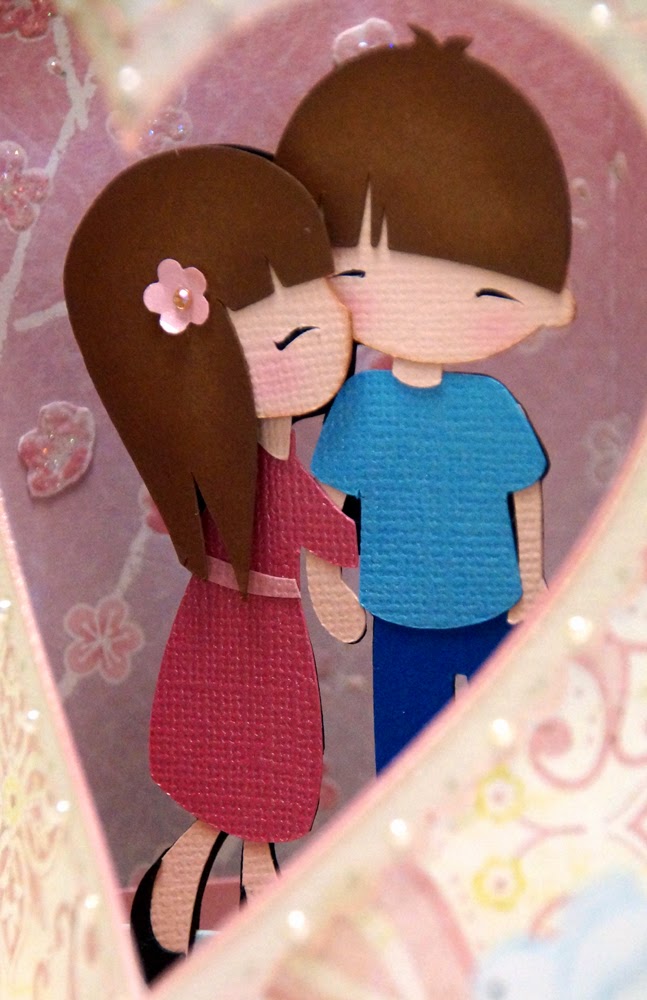 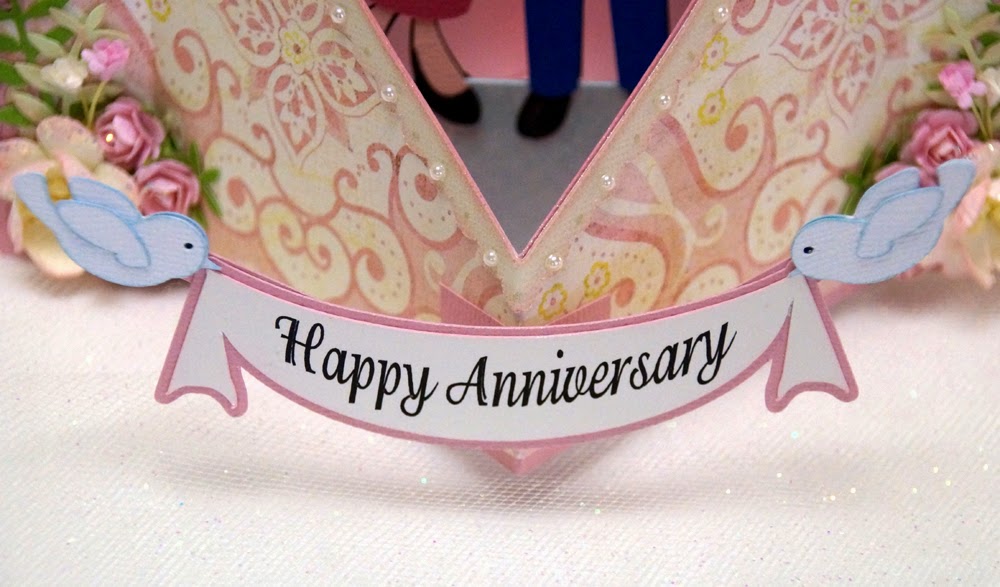 I always find it fun to add a few little subtle details to bring back memories of their wedding whenever I make my daughter and son in law's anniversary card. Though they probably didn't recognize it, the pretty patterned paper (retired, from Basic Grey) I used on the outside is one of the papers I had originally used to create one of their wedding invitation samples three years ago. And in keeping with the lovebirds theme they had for their wedding, I added a bird held banner for the Happy Anniversary sentiment. Birds are from the Cricut 3 Birds On Parade cartridge, and banner is a from a internet image search rendered into a cut file with MTC. 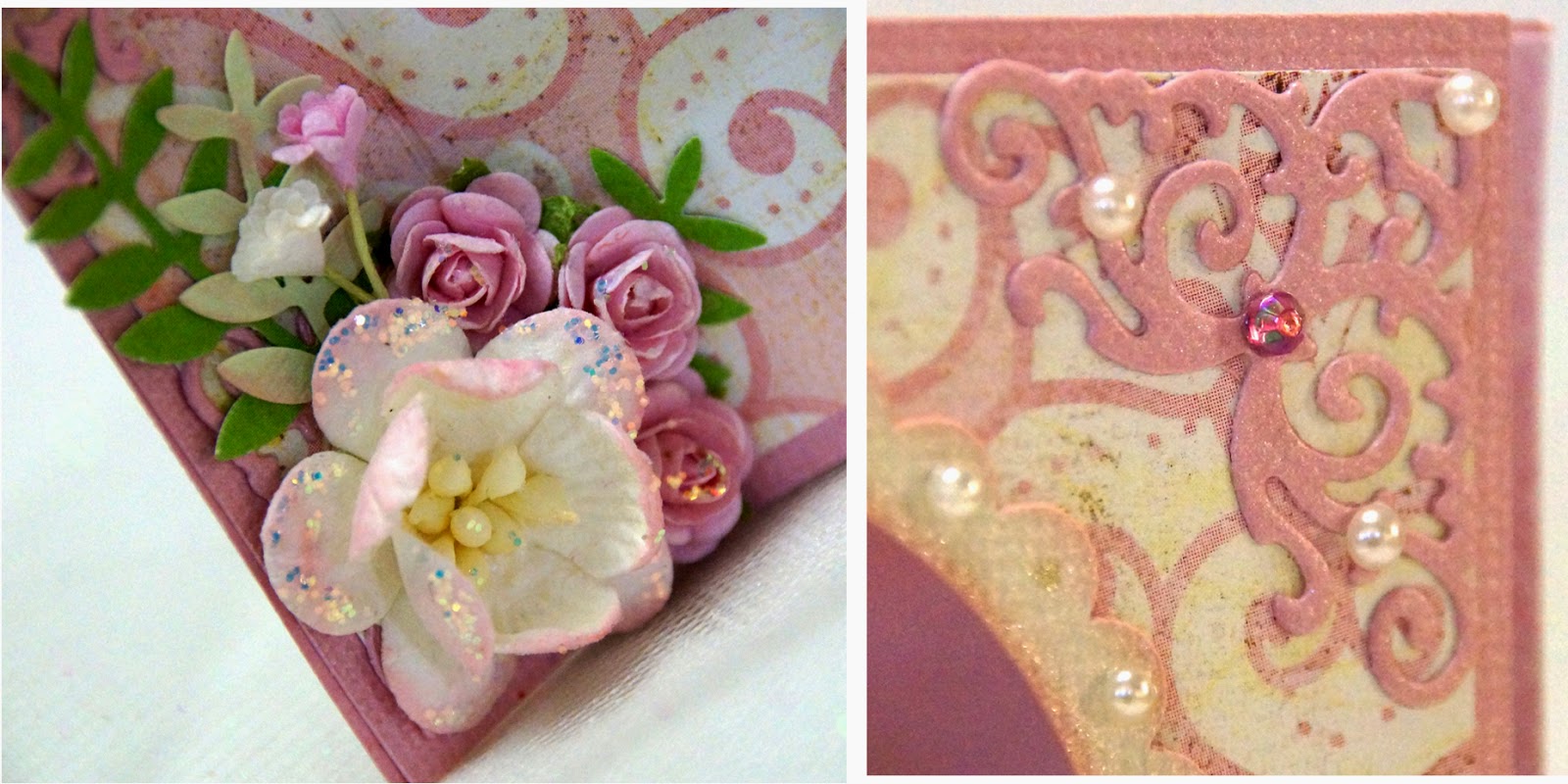 I used paper blossoms from All Natural Accents glittered with Stickles together with foliage from a Nellie Snellen punch on the bottom corners of the box, and a corner flourish die from LaLa Land embellished with flatback pearls and jewels on the remaining corners. And finally I added a scalloped heart frame embellished with more pearls for the window. 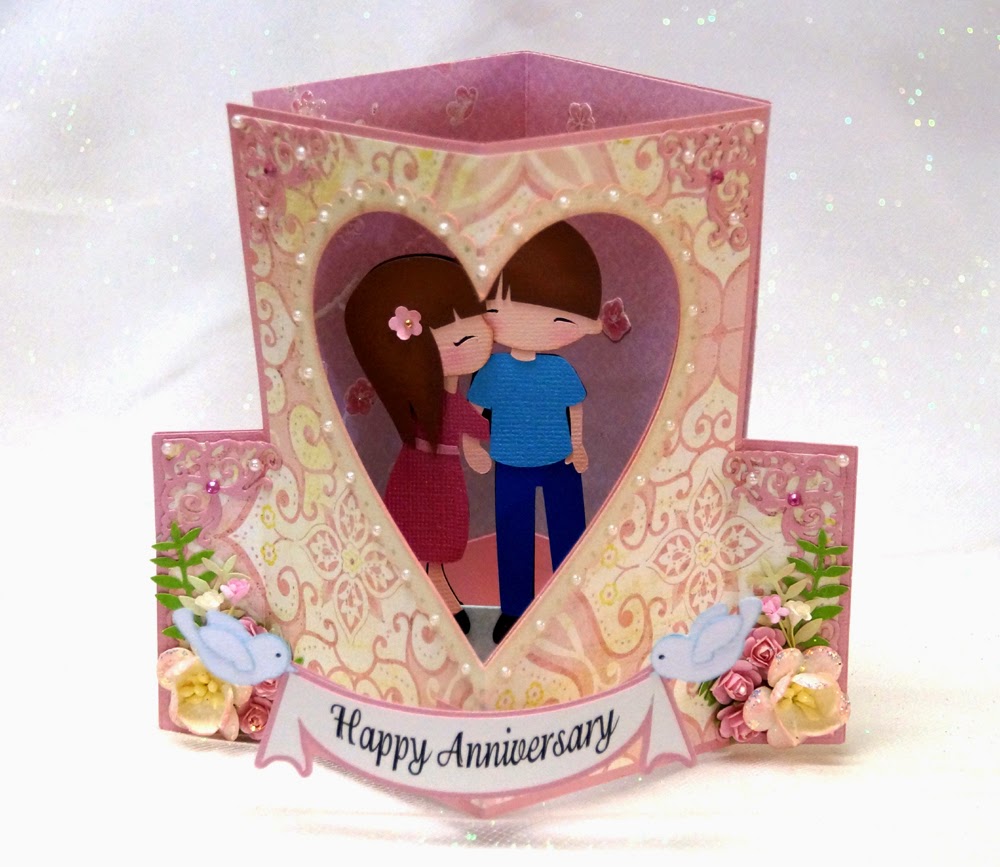 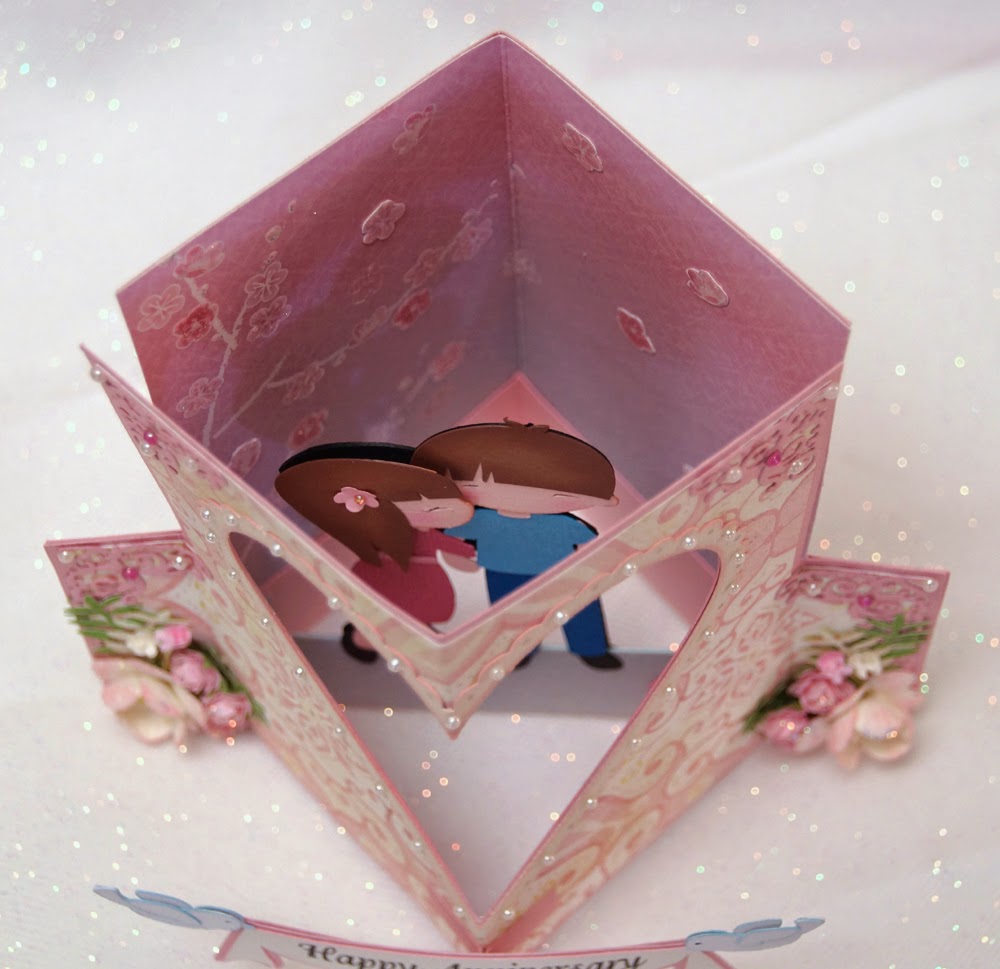 Views from the top of the box show the glittery Best Creation Inc sakura paper from the Kimono line used on the inside of the box and where the couple is attached to the sliding mechanism.
LOL, I think just about everyone on my cardmaking list has at least one (or maybe even two) of this sliding box style cards already. Guess it's about time to start looking for another style card to have fun with....

For a FAN-tastic Friend 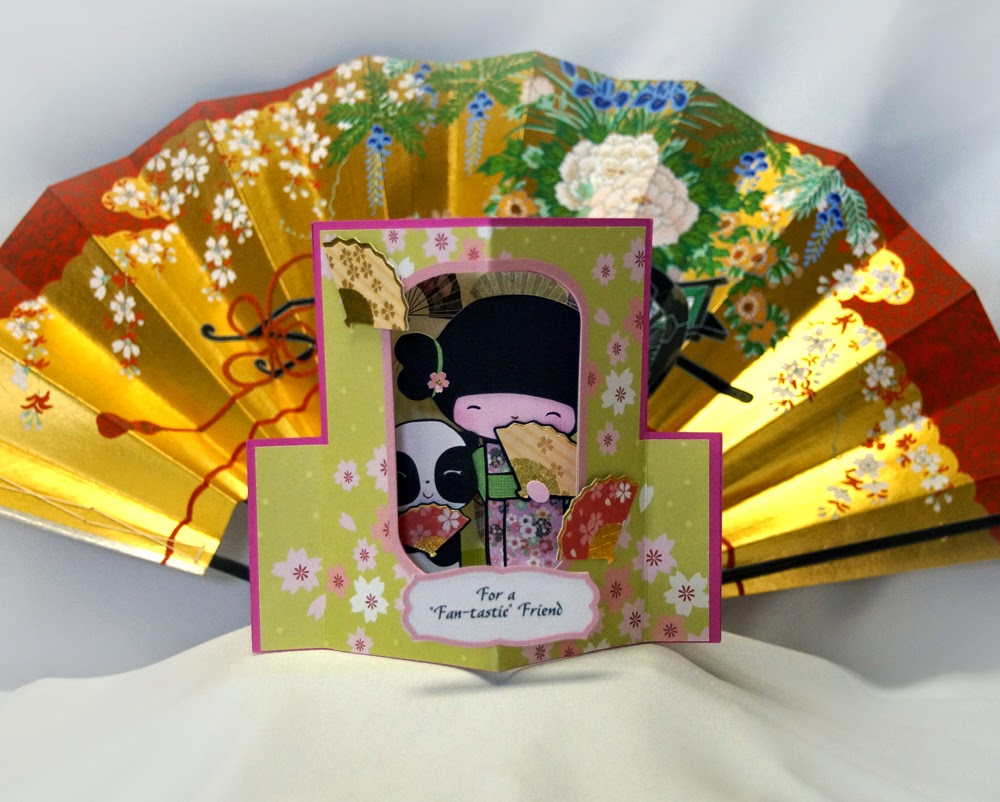 Had another go at my favorite sliding box type card...this time as a birthday card for my sweet and super talented friend Lorna. 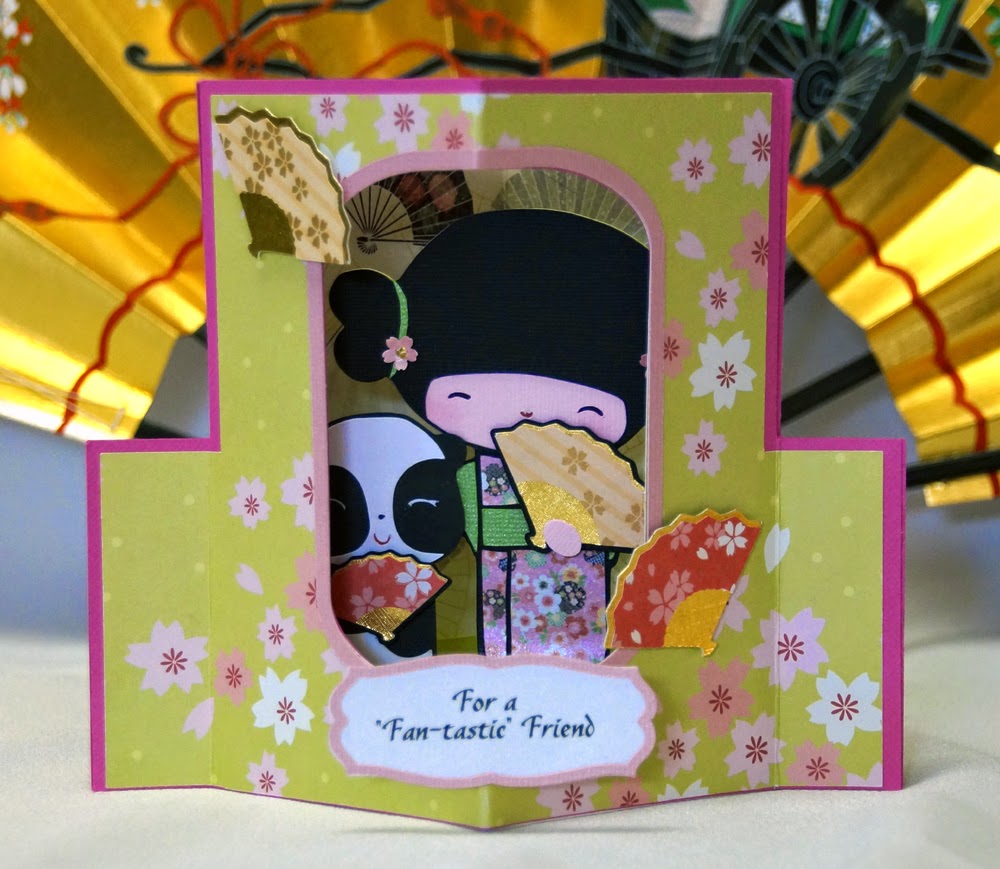 Changed the window for this one to a rounded rectangle shape and put together paper pieced kokeshi Aoki and Panda images from Annelore Parot to peek out from the window. 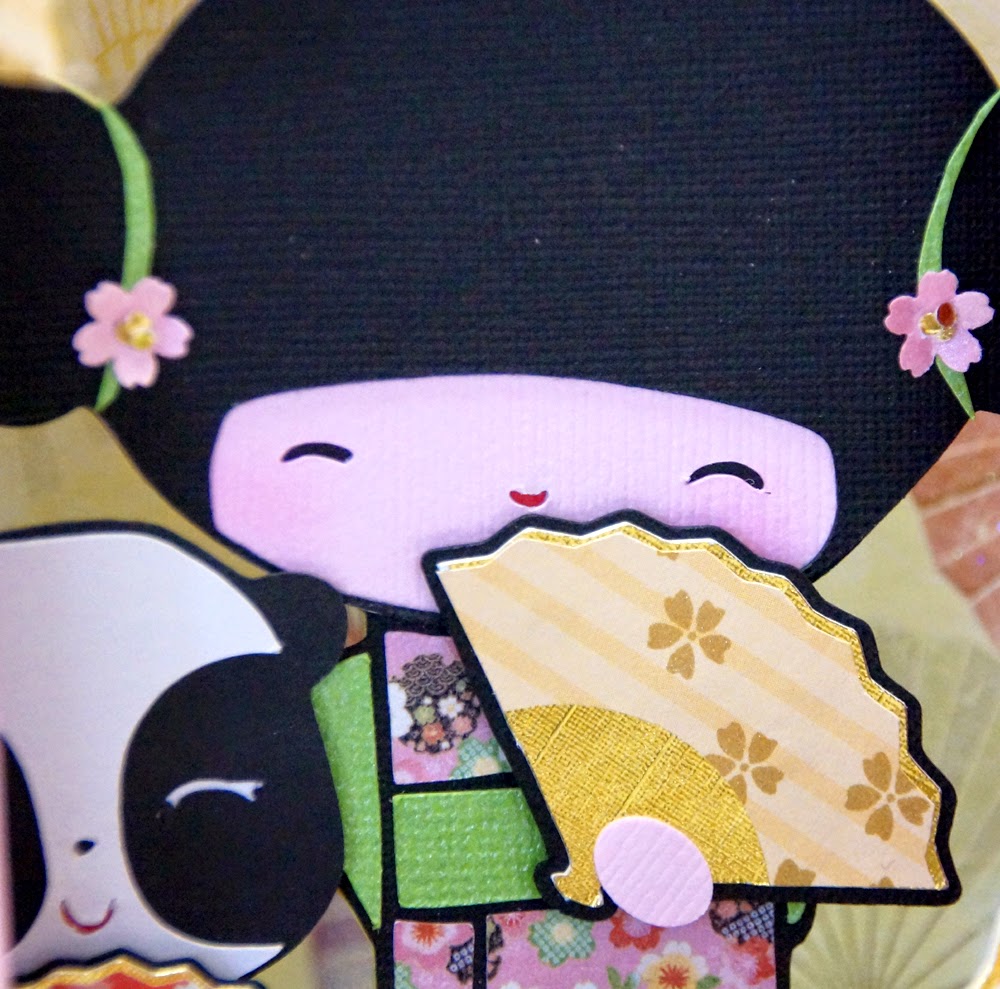 Cutting files for kokeshi Aoki and Panda were created in MTC (Make the Cut) and I had them hold fans cut from Cricut's Pagoda cartridge. Digitized washi paper was used for Aoki's kimono and printed origami paper for the fans. Patterned paper for the base card comes from My Little Shoebox Cherry Delight collection. 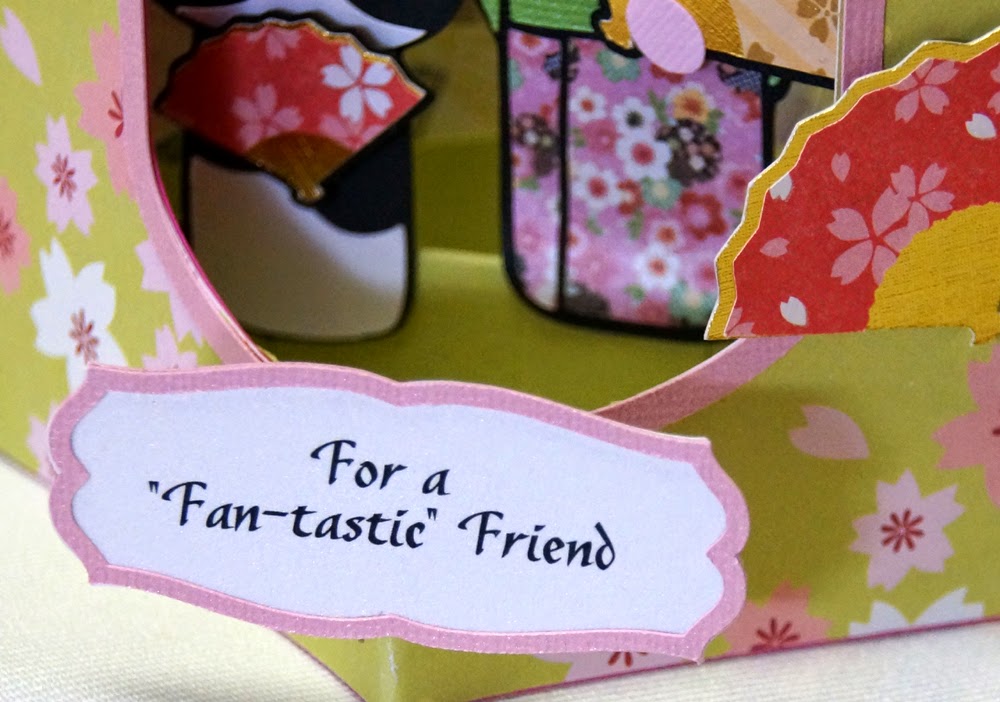 Added my sentiment onto a freebie label svg designed and generously shared by Heather M. on her blog, Images By Heather M. 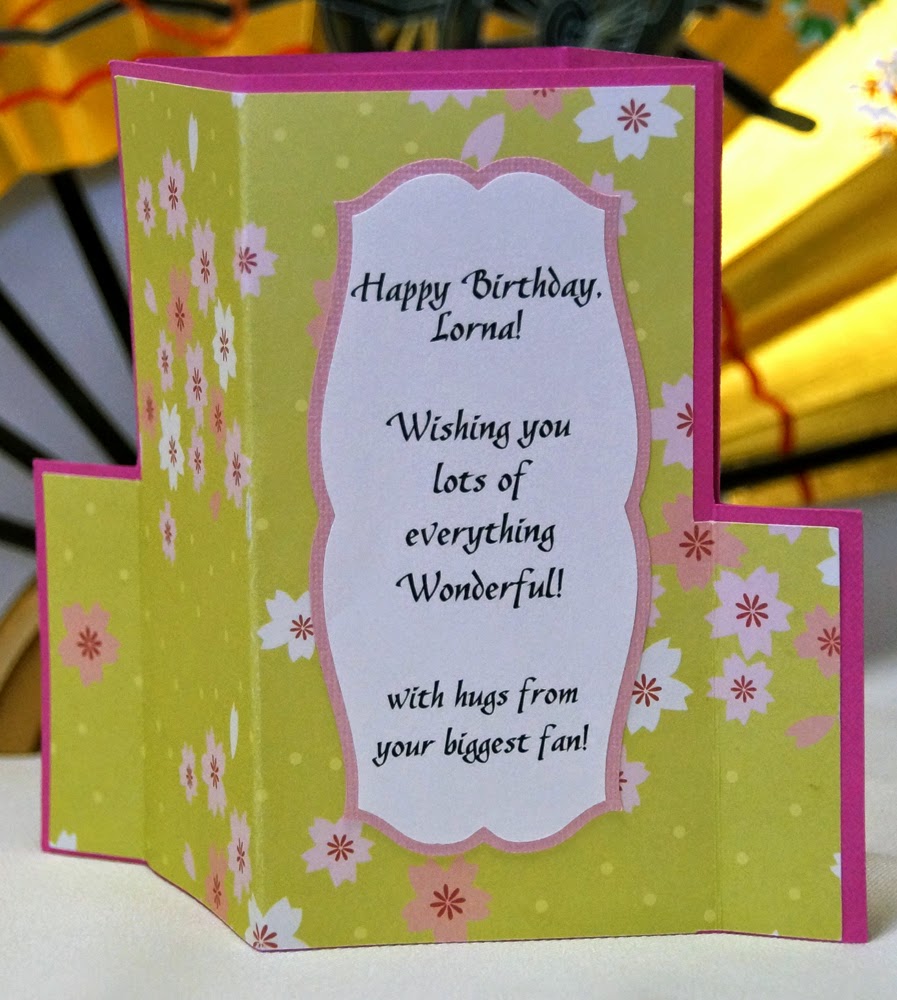 Enlarged the same label and put it on the back of the box card for additional sentiments. Font used is Gaze Condensed ttf. 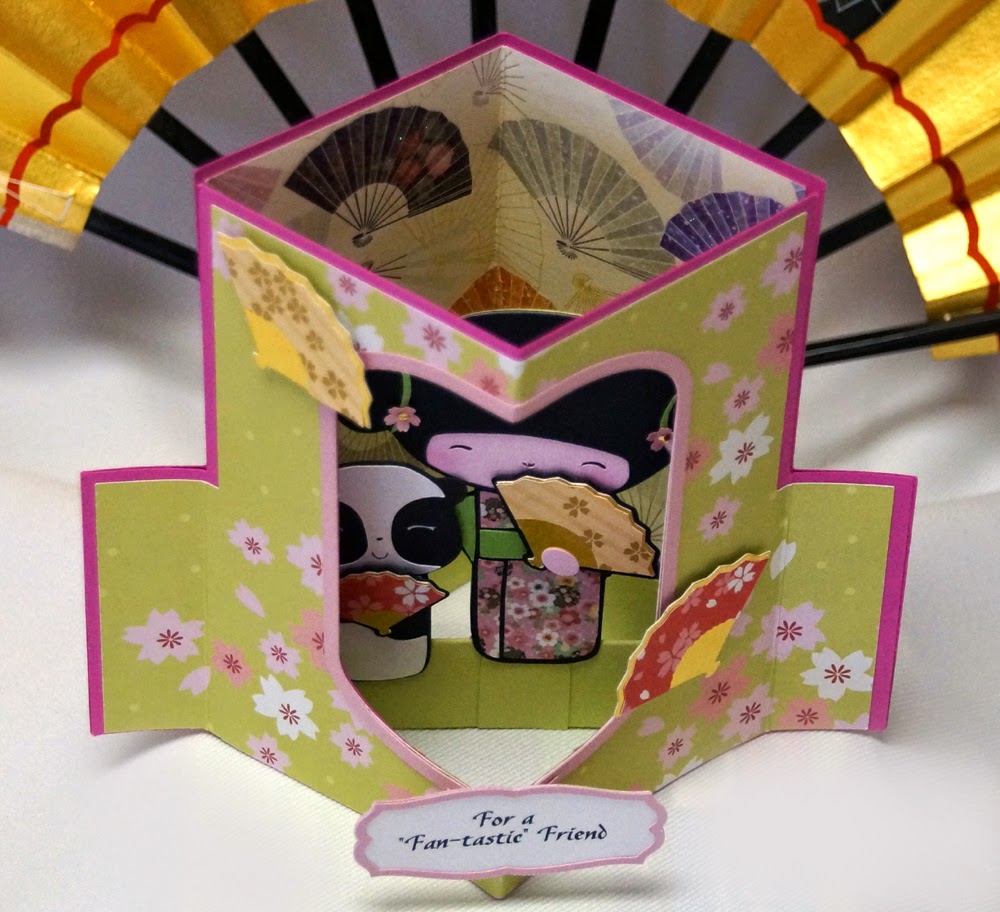 Here's the view from the top...where you can peek in to see kokeshi Aoki and Panda attached to the sliding element inside the box and the pretty patterned fan paper from Best Creation Inc.'s Kimono collection used for the background. 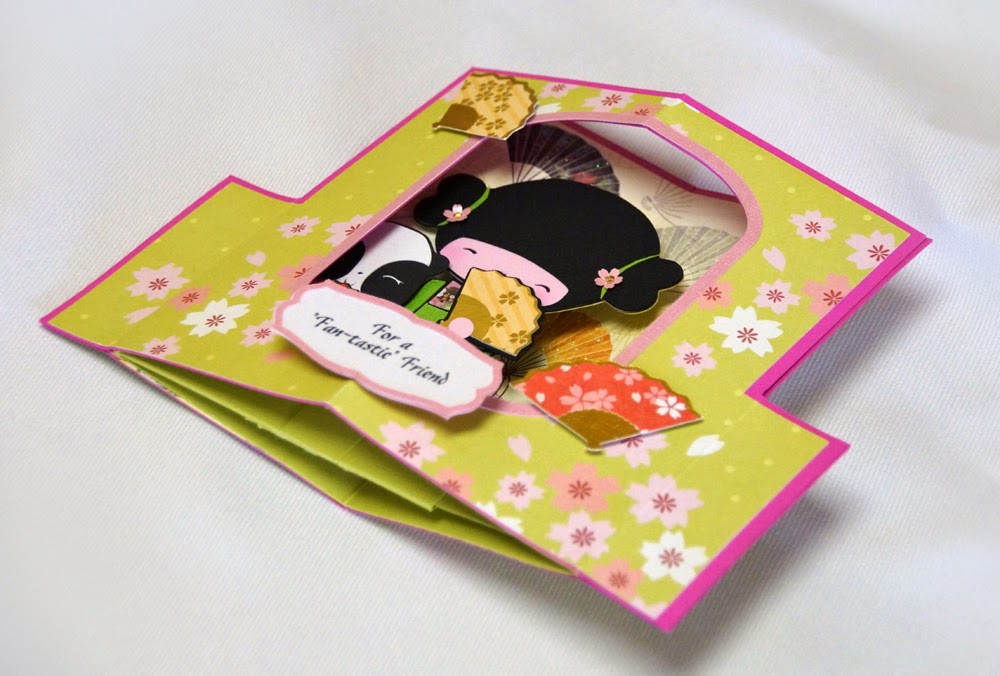 And here's what the card looks like when it's flattened to fit into a envelope. This sliding box card continues to be a favorite for me; still having fun coming up with different ways to decorate and embellish this! If you'd like to give this card a try, I have a mini tutorial for the basic sliding box card posted here. Have fun! 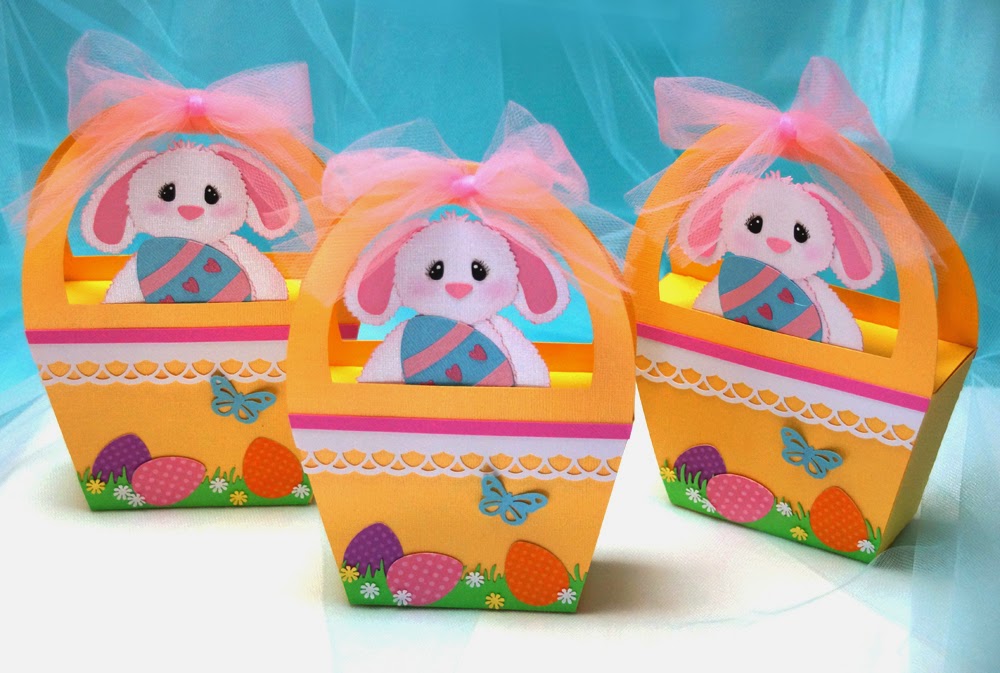 Here are the Easter basket treat boxes I put together for sharing with friends and family this year. The design for these boxes was totally inspired by some cute Ghiradelli candy boxes I spied while browsing the Easter aisle at the store. I thought the box design was so cool and went home to try to create a template cutting file for something similar in MTC (Make the Cut). Once I got the trapezoid shaped box on the inside figured out, the rest wasn't too hard. I created a basket shaped "cover" for the trapezoid box to sit in and tied the handles together with a tulle bow. 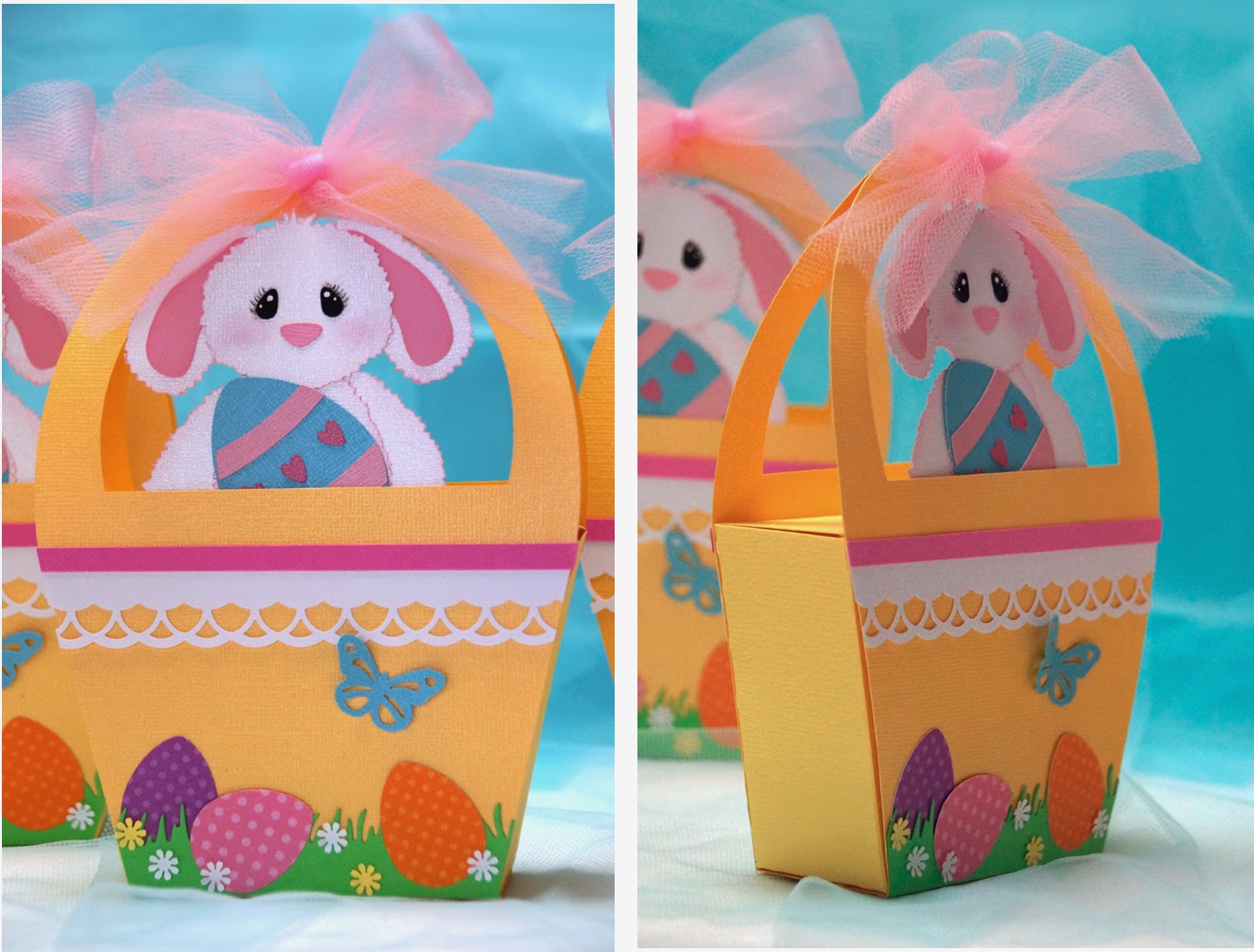 After all fifteen baskets were finally cut and assembled, it was time for some fun decorating! Martha Stewart Layered Arches edge punch was used for a lacey border and Die-namics Grassy Edges die for the grass. Eggs were cut using a cutfile from My Scrap Chick, butterfly is a Martha Stewart punch and I used a mini punch from Punch Bunch for the tiny flowers. 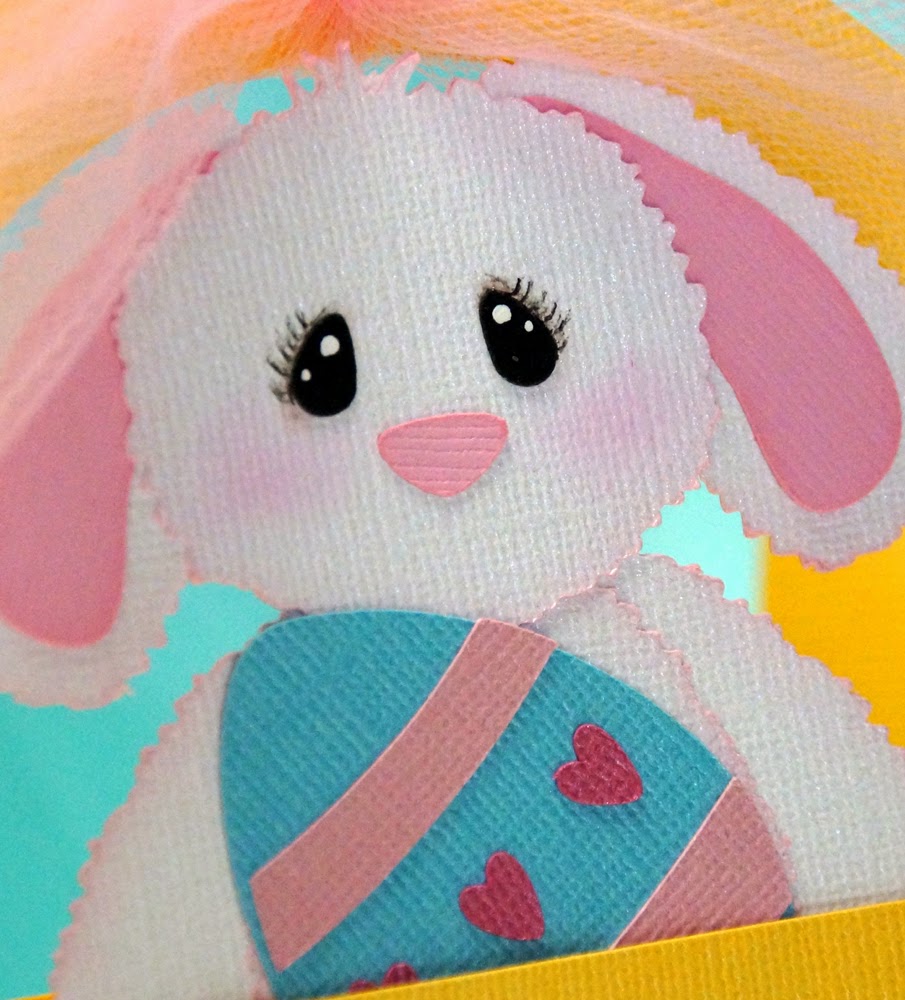 Sweet little lop eared bunny is from one of my favorite cutting files, "Fluffy Bear and Bunny" from My Scrap Chick. 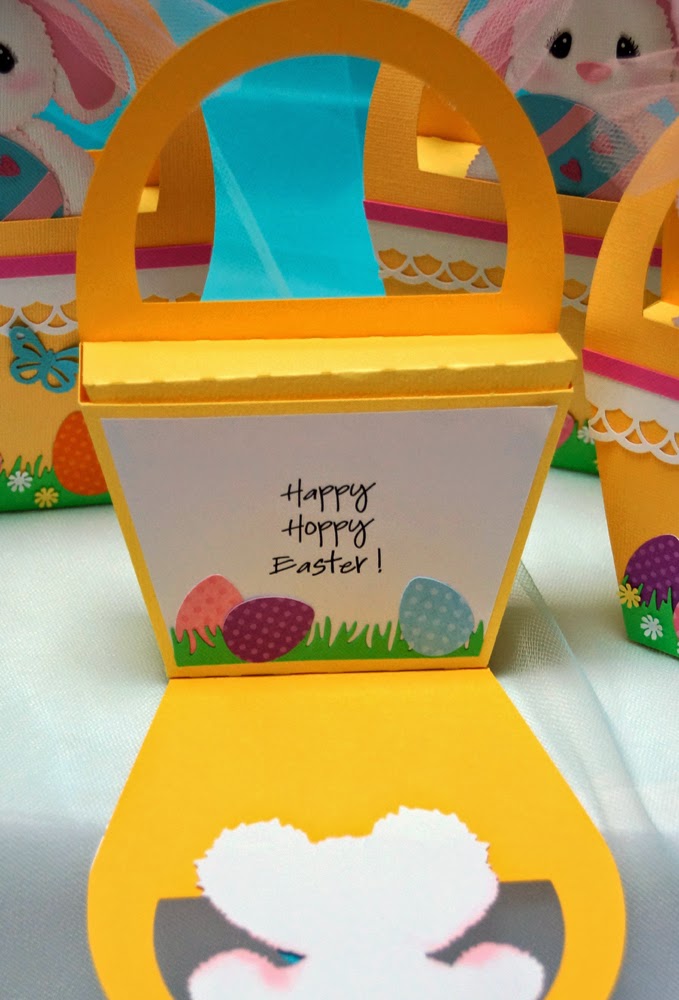 I glued the trapezoid box to just the back side of the basket shaped "cover" so the front side of the cover would fall open once the bow was untied. This made it easier to open the top of the box to get to the rice krispies cookies inside and also gave me a place to add a sentiment. Got the recipe for the cookies online here...a good one to try if you like crunchy buttery cookies.
Had so much fun putting these baskets together! Maybe a little challenging in the beginning to create the template on my own, but definitely a lot more satisfying in the end! 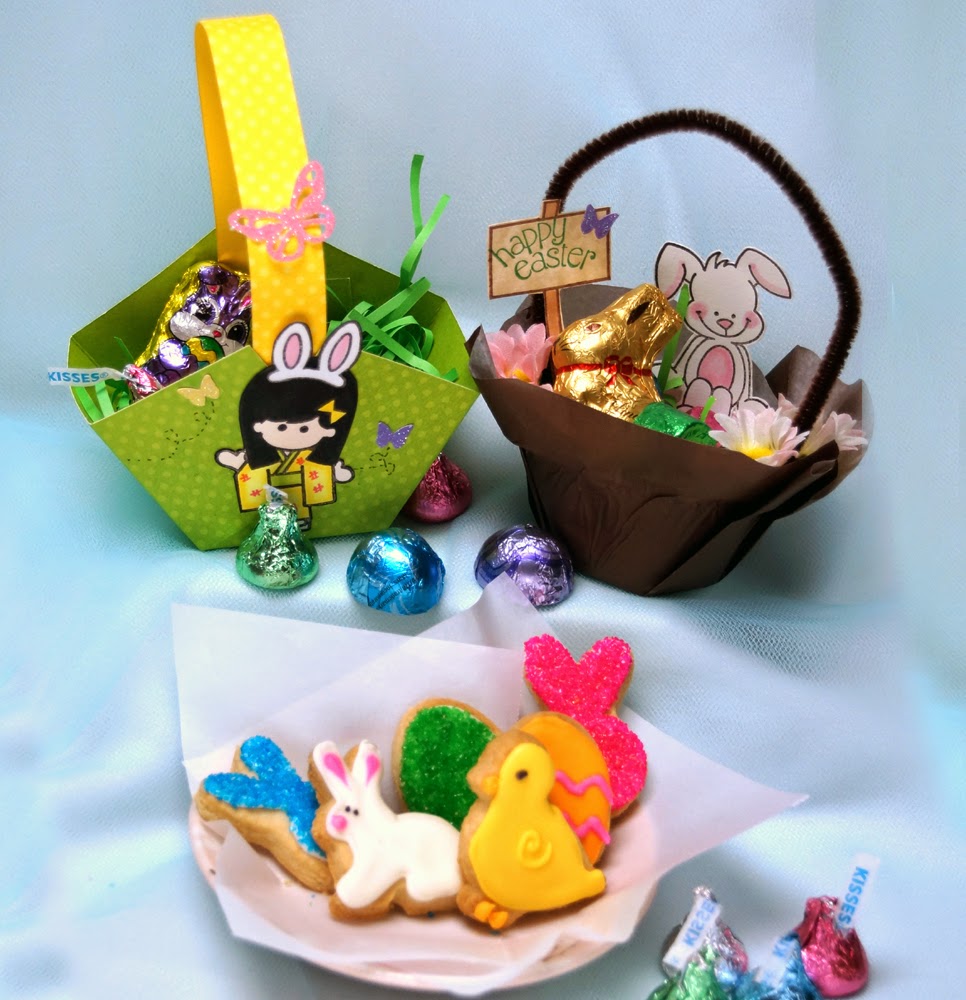 Can't leave without sharing the fabulous goodies I received too! 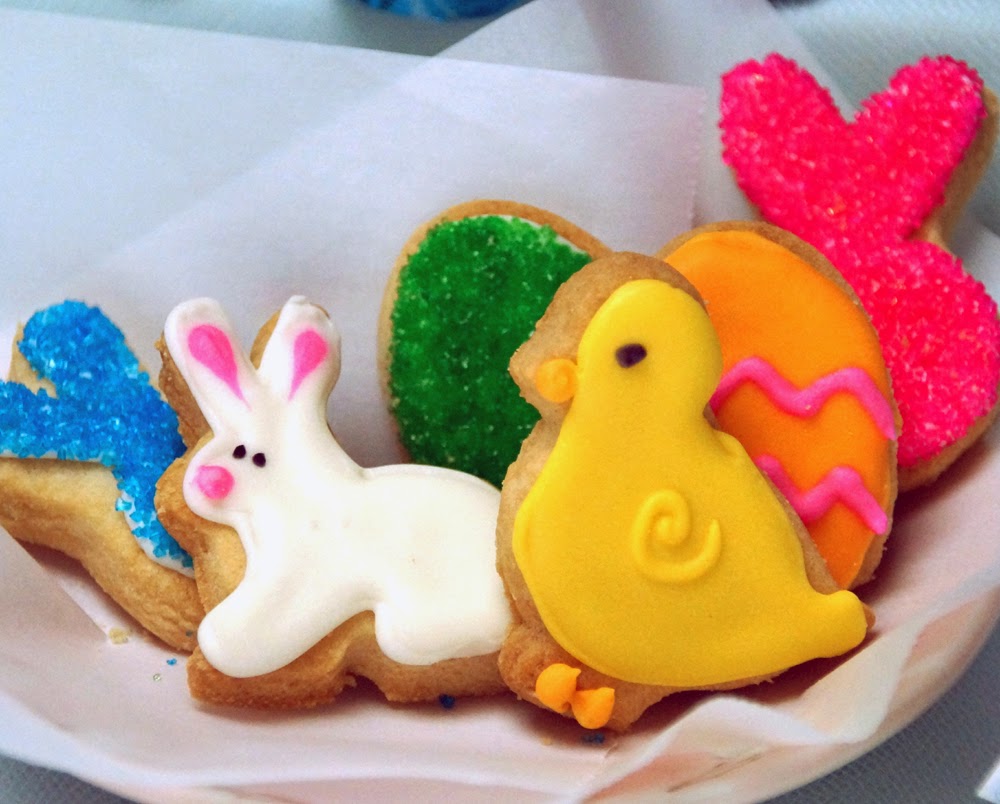 We always look forward to Heather's kawaii cooky creations at Easter...hers are definitely the most YUMMI-LICIOUS decorated cookies ever! But they're so darned cute that I almost hate to eat them!


And finally...our Easter Greeting to you...(starring a very patient Latte!)

To My Favorite Peeps... 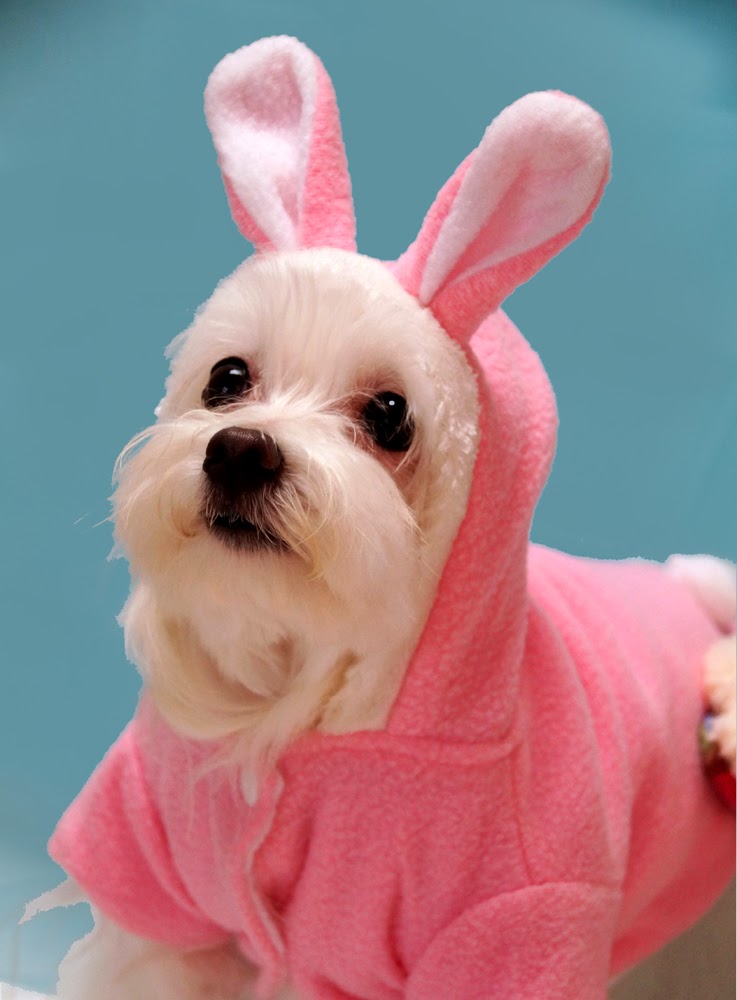 From Some Bunny Who Thinks You're Special!