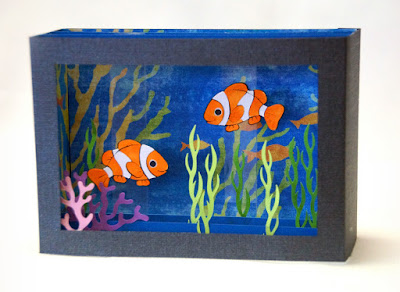 Here's another Fathers Day card, this one created for my dad. My dad is a man who has had many different hobbies, one of them being raising and breeding tropical fish. I vividly remember growing up with a patio full of aquariums...over fifty of them...all immaculately kept and filled with dozens of beautiful varieties of gouramis, tetras, mollies and barbs. Dad raised and bred his fish, selling them to local pet shops to earn money to buy fish food, supplies and even more aquariums to keep his hobby growing.  So when I came across Ilda Dias' fabulous Box Card style aquarium, I was immediately inspired and knew I had to try something similar for dear old Dad. 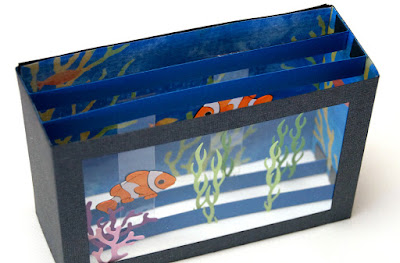 As you can tell from this top view of the card, the  construction of aquarium is basically the same as with the familiar Card In A Box style card that has recently become quite popular. Only difference is that I added the struts on both the top and bottom of the box and cut a window in the front panel. The paper pieced fish were glued onto strips of clear acetate which were attached to the top and bottom struts, to make them appear to be swimming in the aquarium. Coral and seaweed were attached to the bottom struts. After I had everything inside placed where I wanted, I adhered a piece of acetate to fit inside the window frame to enclose the box and make it look like a fish tank. 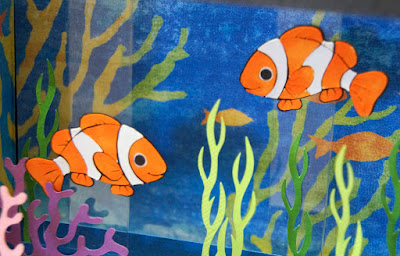 The cutting file for these cute pair of clownfish was created and shared by Make The Cut (MTC) forum member Berryone in the MTC Gallery. Coral and seaweed are Cricut cutting files from the Life Is A Beach cartridge. And the ocean scene used for the background is a very old patterned paper from Flair Designs which I found in my scrapbook paper stash. 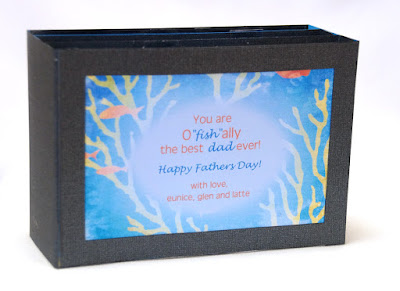 Used the same paper on the back of the aquarium as a backdrop for my sentiment. 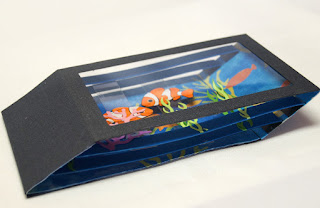 And here's the card folded flat. Poor Dad had to spend his Fathers Day this year in a nursing facility recovering from some health issues, but it was nice to see his face light up for a brief moment as he opened this card. And the good news is, his physical therapists decided yesterday that he's finally strong enough to go home next week. Hurray! It'll be nice to have Dad home again and our lives return to some normalcy.
5 comments: 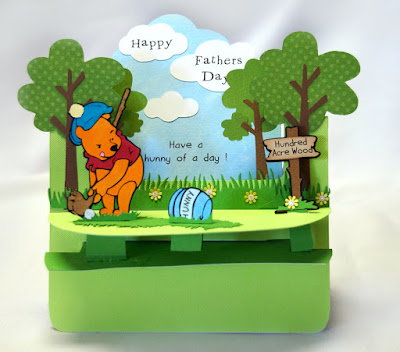 Here's the Fathers Day card that was waiting for hubby before he set out early this morning for the golf course. Yup, another of his favorite golf themed cards...this time it's Winnie the Pooh Bear practicing his putting skills into a hunny jar. 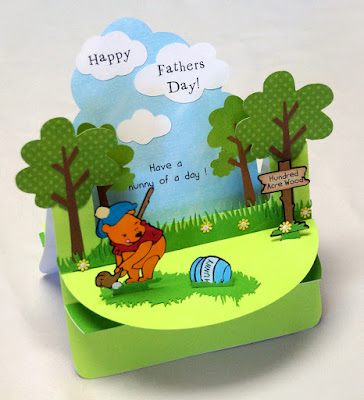 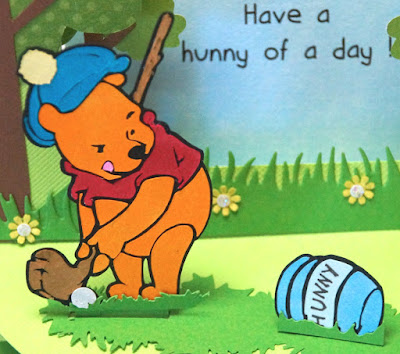 Here's a closeup of Pooh Bear putting into his hunny jar. Cutting file for this was created using MTC (Make the Cut) and an image I found online. Cut all the pieces using the Silhouette from white cardstock , then colored them up with Copics. Definitely much quicker than having to load and reload the cutting mat for each different color! 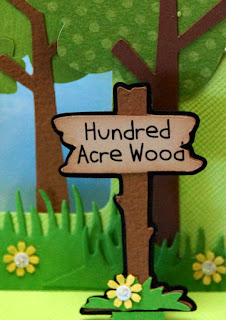 Used a cutting file from Cricut Everyday Paper Dolls cartridge for the Hundred Acre Wood sign, and trees are a cut file downloaded from Miss Kate's Cuttables. Die-namics Grassy Edges die used for the grass borders and a mini punch from Punch Bunch for the flowers. 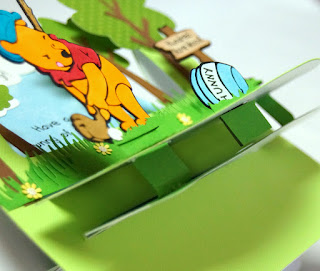 Pooh Bear, hunny jar and sign were all secured onto the "shelf" by attaching a tab to the bottom of each and threading it through a slit on the shelf. Normally the tabs on the bottom should hang free, but in this case my paper pieced Pooh Bear and the sign were a bit too heavy so they kept leaning forward instead of standing upright. After some experimenting I found that that gluing the ends of the tabs of these heavier items to the bottom shelf helped to get them standing straight. 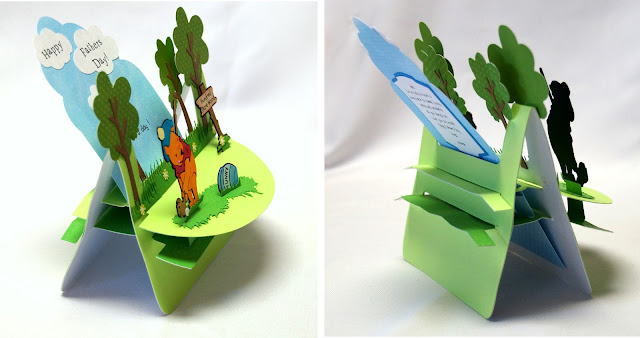 Here's a side and back view of the card. As you can see my center background panel leans backwards because I made the slot for it in the wrong place! Live and learn. I added a label for my sentiment on the backside of the center panel. 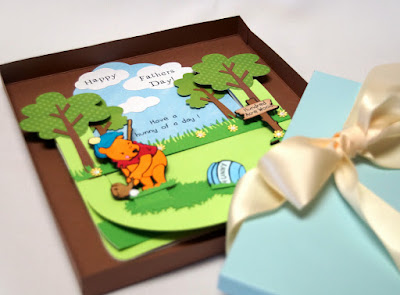 And finally, here's the card, folded flat inside the box I made for it. Hubby seemed pretty pleased with his card, and happily was able to "open" it up easily without any help...yay!  I must admit that making this card for the first time was quite a challenge, but I did learn a lot so hopefully the next time will be much easier. 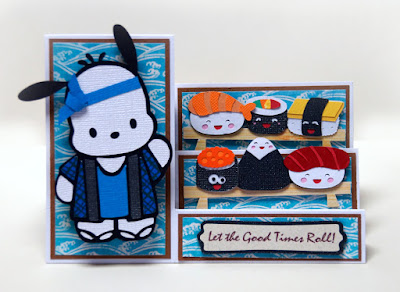 This is a fun side step style card I recently made for my crafting bestie, Kris for her birthday. Kris loves little Pochacco, so when I created the cutfile of Pochacco for my son in law's Boys Day card last month, I knew I wanted to use it again on a card for Kris. 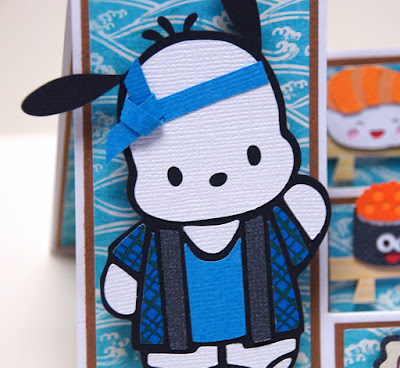 This time around, I added on Pochacco's body with a happi coat with a pair of zori slippers, joining them with his head in MTC. Added on his hachimaki (headband) and Pochacco was ready to make sushi! 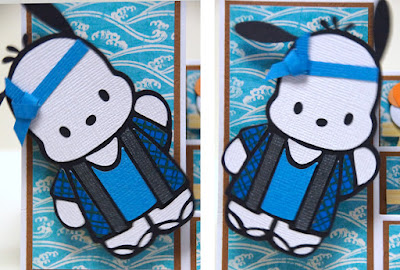 I couldn't resist mounting him on an action wobbler...see, he's welcoming his customers to his sushi shop..."Irrashaimasse!!!" 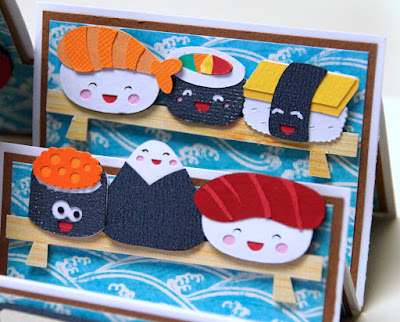 And here's the lineup of the sushi being served. Lets see, there's ebi, maki, tamago in the top row followed by ikura, musubi and maguro in the next. These totally kawaii sushi are cutting files I picked up from SVG Cutting Files and Pretty Paper Pretty Ribbons. By the time I was done piecing everything together I had such a huge craving for sushi! 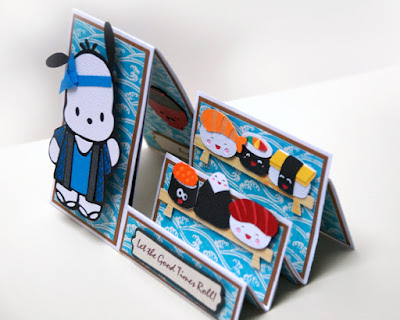 Here's a view of the card from the side; I added panels to the accordian folds or "steps" to get them to be the heights I wanted so the sushi would display nicely. 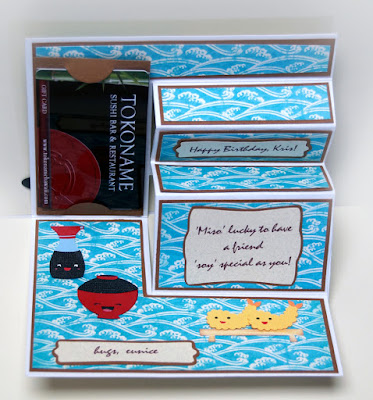 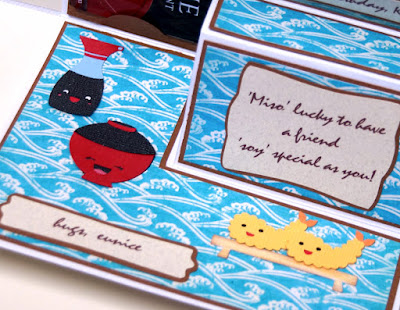 Soup, Shoyu bottle, and shrimp tempura cutting files are from Pretty Paper Pretty Ribbons. Had so much fun putting this card together...and LOL got pretty darned hungry too!
7 comments: 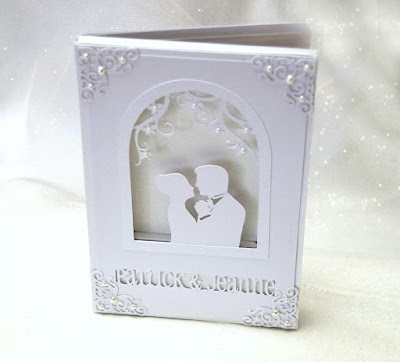 Often when creating cards for a wedding, I like to try and guess the color scheme the couple has chosen for their wedding from the colors on their invitation and use that same color for their card. But recently when we received a colorful wedding invite from hubby's cousin's son I couldn't figure out their color scheme, and decided to stay safe with white on white for their card. I love the simple elegance of white on white and chose three different shades of textured white cardstock...Bazzill Bling Glass Slipper, Star Dream Crystal, and DCWV Glittered White. 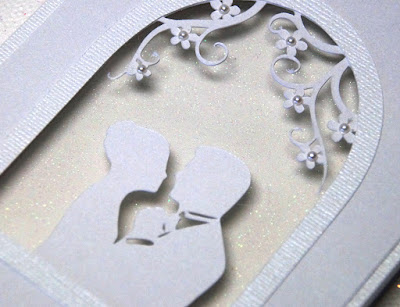 I started with a recessed window card (tutorial by Lynn Mercurio here), glued in the glittered cardstock from DCWV as the backdrop, and covered the front of the window with clear acetate. The beautiful bride and groom silhouette with the arched window is a free cutting file created and generously shared by Heather on her blog, Images By Heather M.  I cut two layers of this image, using my Silhouette machine; the bride, groom and hanging flowers using the Star Dream Crystal cardstock and the arched window using the Bazzill Bling. Both cuts were aligned and adhered onto the layer of acetate.

For a personalized touch, I added the bride and groom's names under the window by creating a cutting file in MTC (Make the Cut) using Pharmacy ttf. font. Hard to tell from the photo but this too was backed with a layer of glittered cardstock and clear acetate. And finally, I used my favorite Lala Land flourish corner die and some flatback pearls to embellish the corners. 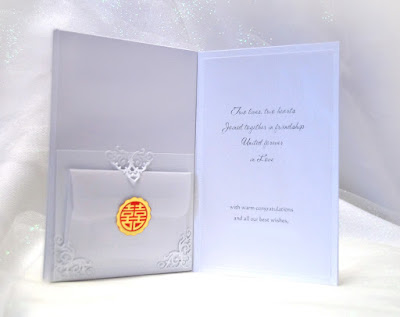 Kept the inside of the card very simple as well. Used the Lala Land flourish corner die again, this time as "tabs" to hold a gift card envie in place. LOL, I guess all that whiteness started making me feel antsy so I just had to add a bold splash of color with a red and gold foil double happiness sticker to seal that envie!
3 comments: