Sister Stamps: Year of the Snake 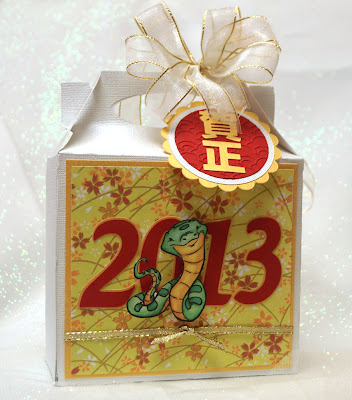 Every year on New Years Day our extended family gets together for an entire day of feasting, partying, watching football and renewing family ties. I usually like to bring boxes of homemade goodies for each of the families. but being the procrastinator I am, I always go crazy the week after Christmas struggling to get these done on time.
Hopefully, this year will be different! I've already begun working on the boxes, using Sister Stamps adorable Year of the Snake stamp to decorate gable boxes to hold my treats. 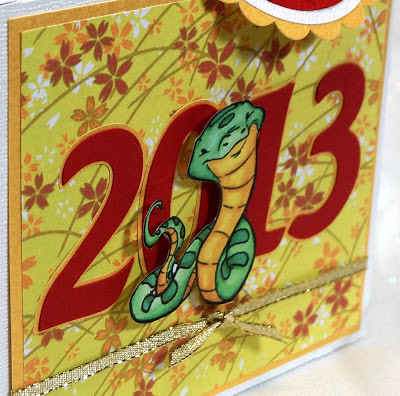 Found a template for the gable box by doing a Google search online (there's so many to choose from!) and importing one I liked to Make the Cut to create a cutfile for it. The year, 2013 was also created with Make the Cut using Beach truetype font. Gold cardstock and printed origami paper were used for the backing and a bit of gold ribbon tied in a knot to finish it off. 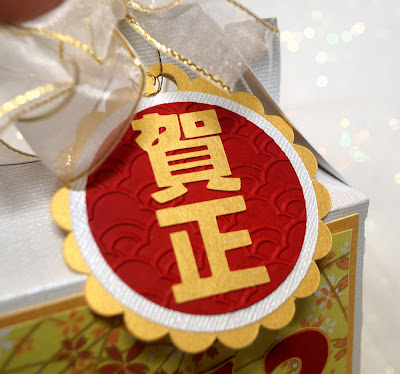 Also added a tag for the box, using the kanji characters for "Gashou" or Happy New Year in Japanese. All elements for the tag including the kanji characters were designed in Make the Cut and cut with the Silhouette. Used my favorite embossing folder from the Cuttlebug Asian bundle to add texture...now...just gotta get crackin' on a dozen more....
Don't forget to check out the Sister Stamps blog as well as the blogs of the rest of the Sister Stamps Guest Design Team for their creative projects using the two new Chinese Zodiac stamps! 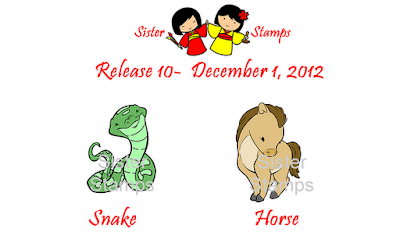 Have you heard? Sister Stamps will be releasing their first two stamps of a very special Chinese Zodiac Collection this Saturday. I'm especially excited about this new collection of stamps for two reasons...one being that I've been waiting for and wanting a set of cute Chinese Zodiac animal images like these to use on New Years projects for the longest time! And secondly, because I was given the honor of being invited by Jenny to join her team of super talented guest designers for this release.
One of the nicest things about working with these stamps is that it gave me a chance for an early start on my New Years projects! 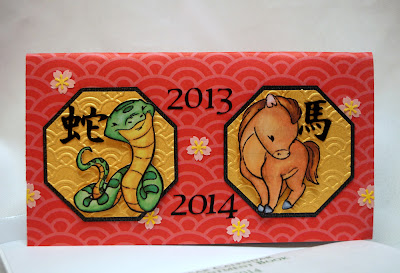 For my first project, I used copics to color up the adorable snake and horse to decorate a wallet sized calendar/appointment book. 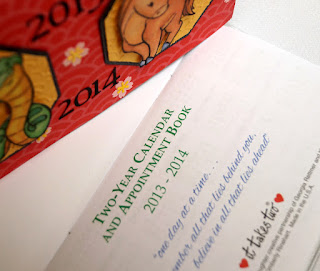 This particular one is a two-year calendar, which really made it perfect for using both the Year of the Snake (2013) and Year of the Horse (2014) stamps. 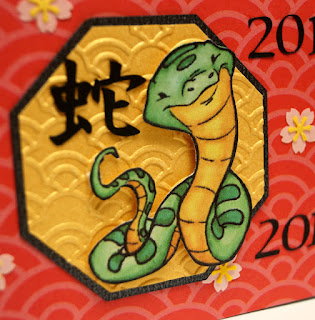 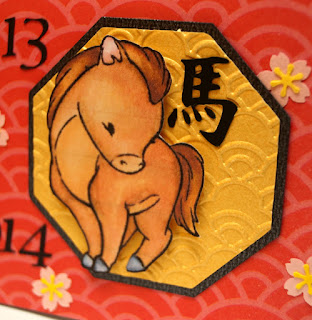 Used the Make the Cut program and Silhouette machine to create and cut out the octogons, years and the kanji characters for snake and horse. Tiny sakura blossoms were put together using Punch Bunch and Carl punches.  Ran the gold octogon pieces through a Cuttlebug embossing folder (Asian bundle) and adhered everything to a piece of patterned paper (My Little Shoebox, Aiko collection) cut to fit the calendar.
Wouldn't you agree that these are the most adorable snake and horse Chinese Zodiac images ever? Denise did a fabulous job of creating these sweet critters, and just wait and see... you'll find yourself wanting to add all twelve of these cuties to your collection! Get a preview of all twelve of the stamps (which are scheduled to be released two at a time throughout 2013) here at the Sister Stamps blog.
And if you haven't done so already, you must go and check out the amazing projects created by the rest of the guest designers for this release. Here are the links....
Patti: http://creationsbypatti.blogspot.com/
Linda: http://simpleandsassycreations.blogspot.com/
Laura: http://bytkg.blogspot.com/
5 comments: 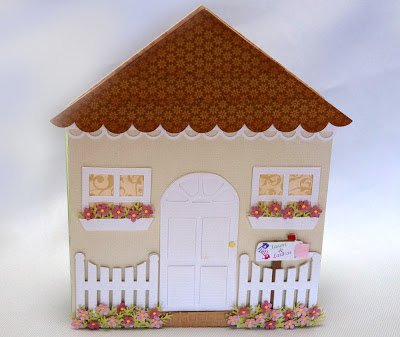 Dh and I just got back from a mini vacation visiting with our daughter and son in law at their new home in Cali. For our housewarming card to them, I thought it might be fun to try a house shaped card...
Been seeing so many different styles of very cool fence, door, and window dies in all different sizes being released by many of the companies specializing in thin dies lately. And seeing all the beautiful cards and paper crafts that others have created with them really made me want to run out and buy some too! Ahhh.....but at 10 - 15- 20 dollars per die...I just couldn't justify the spend. And how often would I actually use them? Better to try and create my own using the Cricut cartridges I already own and Design Studio or search for some images to trace in Make the Cut. 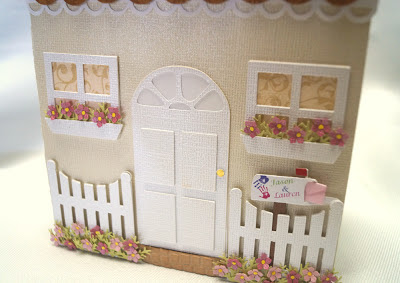 ﻿
I admit it did take a lot longer to do than simply buying the ready made dies, but in the end I had cutting files that can be changed, re-sized or re-designed to fit my future needs.
It's difficult to see in the photo, but the roof on the house was actually inked and pieced as three separate scalloped, overlapping layers for some dimension.
The tiny flowers and leaves along the fence and in the window box were punched from a mini Punch Bunch blossom punch and Martha Stewart small branch punch.
For the front of the house, I used MTC and the Silhouette to design and cut the door. I used my Cricut, Cricut Design Studio and the George cartridge to create the windows and windowboxes; Picturesque cartridge for the picket fence and Wild Card cartridge for the mailbox. 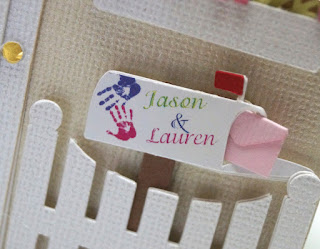 Really had fun with the mailbox! I made a teensy-weensie envelope to fit inside the mailbox, and couldn't resist decorating the mailbox with some personalization. Does that look familiar? Yes! It was inspired by Carl and Ellie's painted mailbox from one of my daughter's favorite Pixar animated movies, "Up". 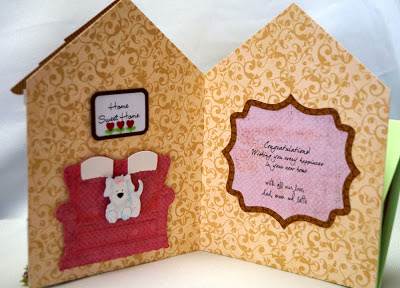 Open the card to the inside of the house and there you'll find a little white doggie perched on a comfy couch. (LOL, this is the little doggie my son in law has been promising to get once they got a place of their own...) The sign on the wall above the couch reads "Home Sweet Home".
Couch and doggie are Cottage Cutz dies and the sign was created in Design Studio.
﻿ 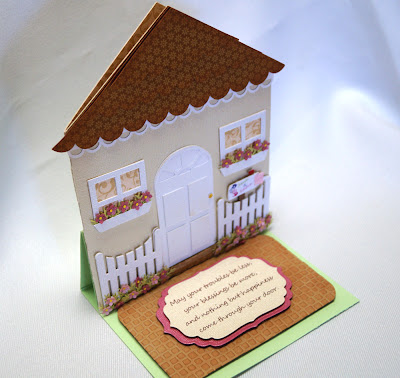 As a final step, I decided to add an easel to the back of the card so it could easily stand up for display. 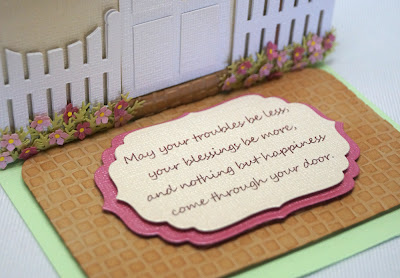 I inked up a Cuttlebug embossing folder (Tiny Mosaic) to try to create the look of a front sidewalk, and placed on it a charming old Irish saying framed with cuts using the Nestabilities Label Four die.
Whew! Took me quite a while to put this one together...but I have to admit I did have fun with it!
9 comments:

For My Hubby the GEEK 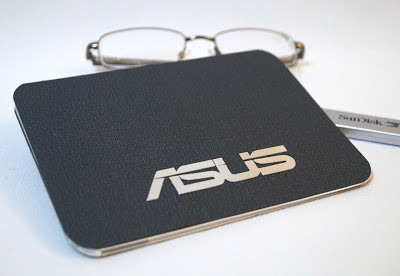 Last month was such a busy birthday month! Three of the most important people in my life, DH, DD, and my son in law all celebrated their birthdays in October. That's two guy cards for birthdays less than a week apart...no wonder my brain hurts!

This "mini" laptop card was for my DH the computer geek. In my search for guy card inspiration, I was delighted to come across several very cool cards made to look like a miniature Apple MacBook and knew I had to CASE the idea. But being that DH has always shunned the Apple Operating System, I naturally had to change it up to look more like his own Windows based PC. Simply used Make The Cut to trace and convert the ASUS logo into a cutfile and cut them from silver metallic cardstock. 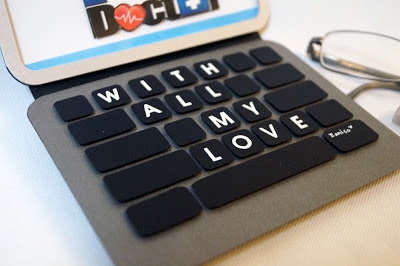 On the inside, I used rounded squares and rectangles popped up with foam tape to look like a keyboard and used MTC (and Arial font) to create the alphas, cutting them out of white vinyl. 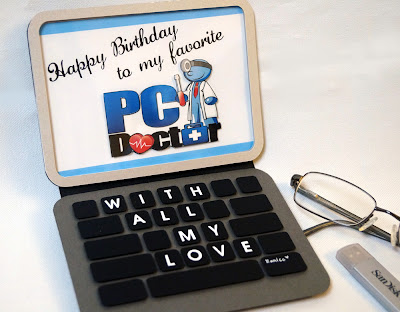 I used the computer screen to display my sentiment placing it behind a piece of acetate. DH always reminds me about how lucky I am to be married to a "computer doctor", so I thought he might get a kick out of this. I have to admit he's right though....because he has always been there for me and our family whenever we run into any computer problems!
4 comments: 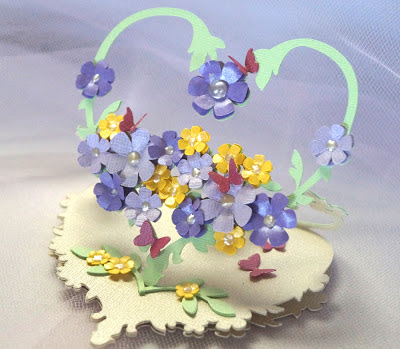 Had so much fun making my first card using the flowered frame cut from the Cricut Love Struck cartridge couple months ago, that I couldn't resist playing around with that cut again for another thank you card. I had been toying around with the idea of a frame or window type easel card in my brain for some time and decided it was time to give it a try. 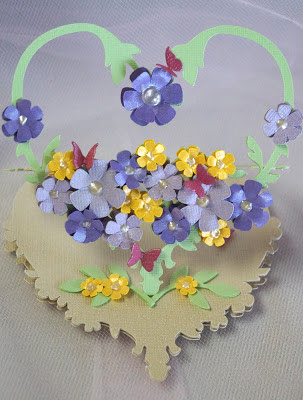 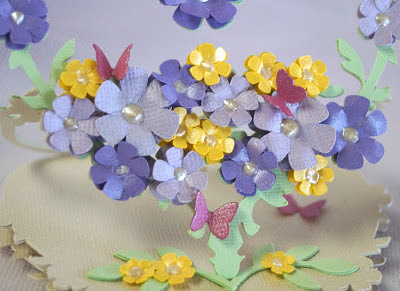 For the stop, I used branches punched and trimmed from Stampin' Up's Two Step Bird punch. The card base was created in Cricut Design Studio by welding the black out cut of the flowered frame at the top. A Robins Nest dewdrop is the center for the blossom on the top of the frame and I used Viva Liquid Pearl Pen to do the centers for the rest of the flowers. 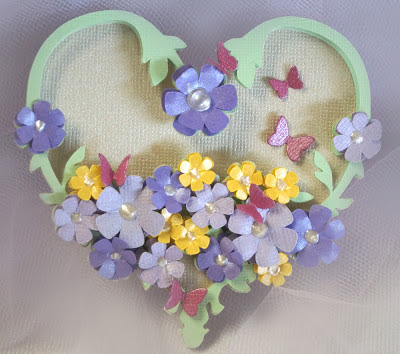 This is what the card looks like when returned to it's flat position... 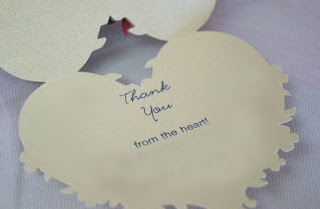 ...and a peek of the card on the inside.
I was happy how this card looked once it was propped up, but a little disappointed that it turned out kind of flimsy...lol, or maybe I should say "delicate"....  because the width of the leafy stem part that forms the heart shape of this frame was probably too narrow. And since I used another frame cut instead of  a solid piece of cardstock as the folded easel support, the finished card front might have seemed a little confusing to a recipient who is not familiar with how an easel card works. Fortunately, this card was created for my blogging friend Lynn of Ben Franklin's Lynn's Craft Blog (who is a seasoned and "pro" at crafting), for a very special surprise RAK I won on her site. Lynn always inspires me with her beautiful creative craft ideas and I love to visit her blog to stay in the know of the newest and coolest crafting tools and ideas hitting the market. Thanks so much, Lynn!﻿
﻿
3 comments: