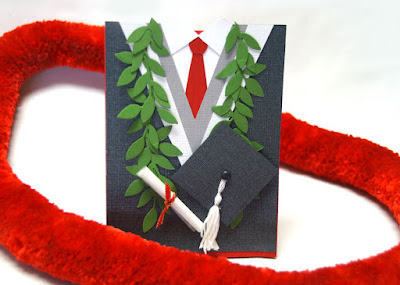 Another graduation card to share today. This one was for a cousin's son who also graduated from Seattle University. A simple cap and gown style card, and since the graduate is from Hawaii, of course I had to add a maile lei! I think it's just the coolest thing that nowadays no matter which college graduation across the country you attend, you'll see so many of the graduates adorned with leis. A wonderful Hawaiian style tradition that has become a popular trend across the nation. 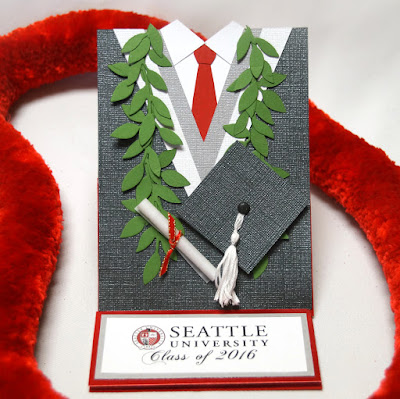 This graduation card opens up to be an easel style card. I used the  "Mans Suit and Tie Easel Card" file from My ScrapChick to make this, but left the lapels off from the original file and added on an additional v-neck layer instead to make it look more like a graduation gown. The lei was made using a Sizzix Stampin' Up Little Leaves die; I cut and layered several of branches together to look like a maile lei. 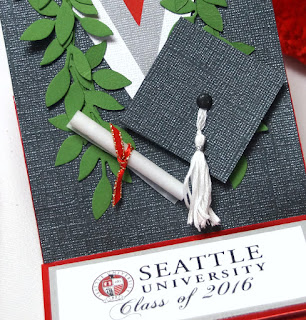 The graduation cap is simply a punched square with a brad and a tassel made from embroidery floss; and the diploma is a piece of vellum rolled and tied with some ribbon. Quick and easy, just the way I like it! Hoping the happy graduate liked it too! 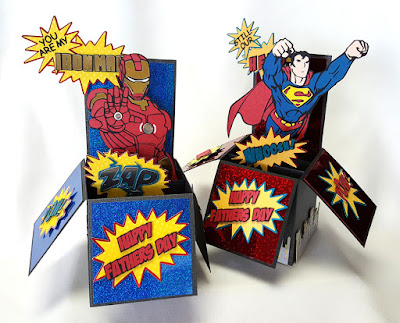 Fathers Day is this weekend and these are the Card In A Box Fathers Day cards I made for the incredible men in my life. The original idea for these cards comes from my sweet blogger pal, Tina Herbeck who created and shared an AMAZING Mr. Incredible Card In A Box on her blog, The Scrappin' Rabbit awhile ago. I immediately fell in love with Tina's card and knew I wanted to do something similar...it's always so hard to come up with ideas for cards for guys! 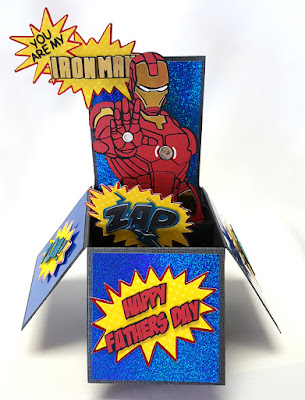 At our home, hubby's more of a Marvel Comics fan than a Disney fan so I knew his superhero card had to have either Captain America or Iron Man on it. And I guess that's the main reason it has taken me so long to even attempt this card. 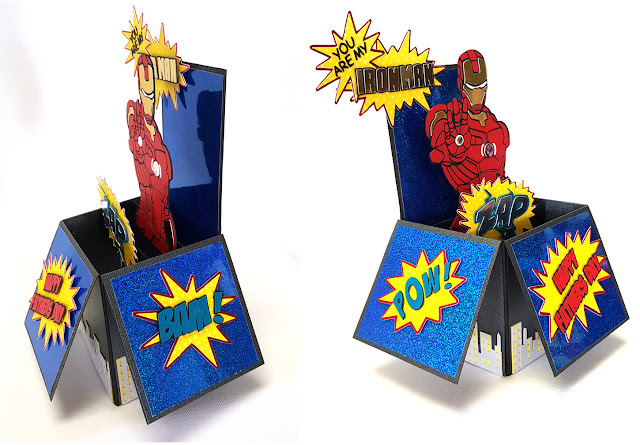 I searched the internet for nearly two years, hoping to come across a good Iron Man cutting file, but no such luck. I found a coloring book image I liked, but the thought of having to edit and re-edit it to create a decent cutting file gave me a rash....sooo many tiny piecings involved! Sat down countless times during the past year to work on it but always got frustrated and gave up. 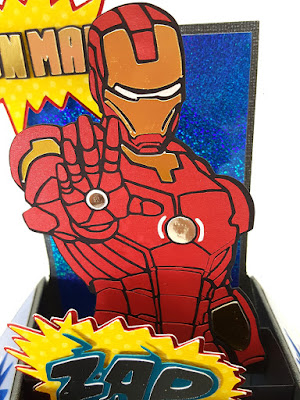 Well last month, I was nearly at wits end trying to come up with ideas for Fathers Day cards, and Tina's Mr. Incredible card kept popping into my mind. I knew then that I just HAD to finish that Iron Man cutting file. Many hours and late nights later it is finally finished. 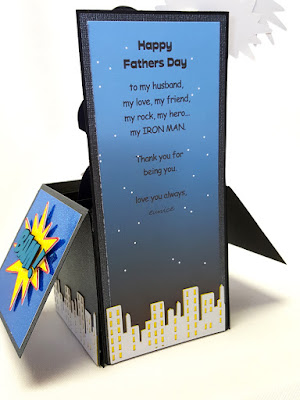 Everything else about the card came together fairly easily. Found lots of superhero bubbles on the internet which were simple to convert into cutting files in Make the Cut for the flaps of the card. I used Comic Sans and BaDaBang fonts to create cutfiles to customize some of the bubbles. Many superhero building borders on the internet too so that wasn't too hard to render into a cutfile. 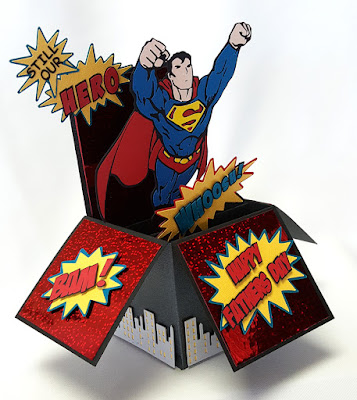 Next, a card for my dad. Not sure if he's much of a Marvel Comics fan...always thought of him more as a DC Comics person so I chose to use Superman for his box card. 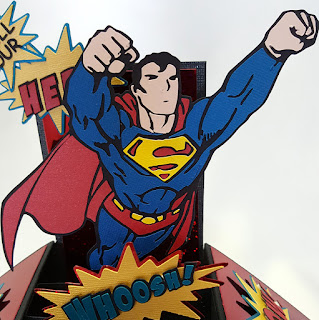 Happily, I already had cutting file for Superman in my files so dad's card came together really quickly. 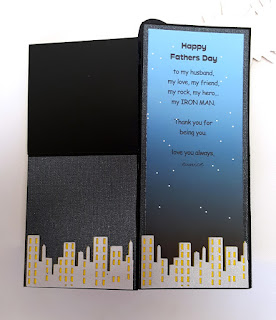 I'm sure everyone already knows what a Card In A Box looks like folded flat...
It's kind of a cool thing how these cards open up into a box. About a year ago I saw a short video shared by Steven Franco on SVG Cuts Facebook page on how to make this card even cooler... of course I had to give it try! 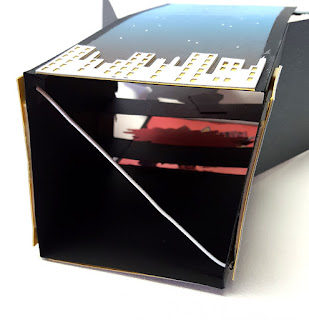 Steven made a tool box shaped Card In A Box for his dad and showed how he added elastic thread to the bottom of his card. The elastic thread needs to run diagonally across inside the bottom of the box. The length of the elastic should be the same as the distance inside the box from corner to corner (when the box is open). I wish I knew a way to share his video here, but since I'm not very tech savvy, the best I can do is share my poor quality phone video...

I think you get the idea... Anyways, I think it's pretty neat how the elastic added to the bottom  will allow the card to POP open as you open the envelope.  Hopefully dad and hubby will think it's cool too!

For A Nurse's Graduation 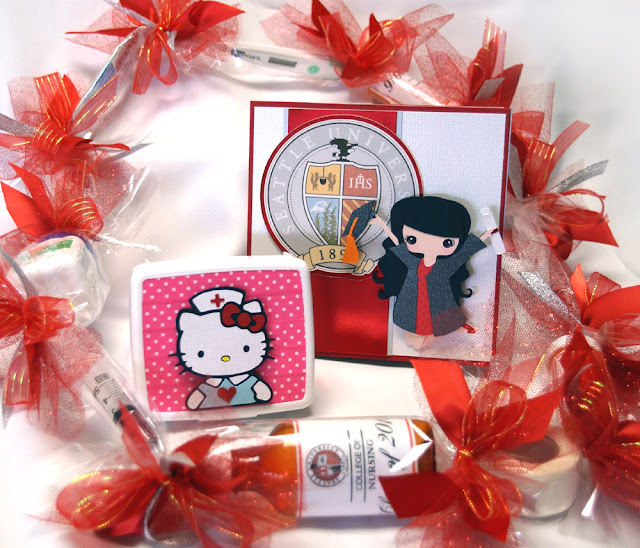 Today my dear sweet niece graduates from Nursing School and our entire family is so proud and happy for her. Had a great time putting together a fun card and some goodies for her to celebrate her big day. 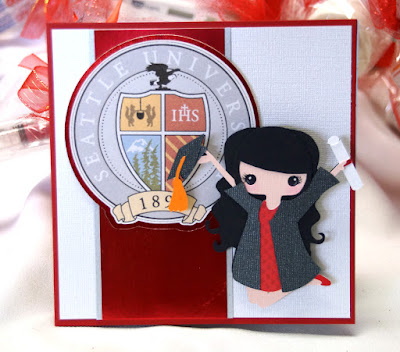 The inspiration for this graduation card comes once again from my very creative and talented friend Patti, of Creations by Patti. You can take a peek at some of the wonderful graduation cards she created here. Like Patti, I used the cute girl graduate cutting file from SVG Cutting Files on the front of my card. I dressed her in red to match Seattle University's colors and gave her cap an apricot tassel to signify a nursing school graduate. I printed and cut out the university's coat of arms logo and added it to the background for a personalized touch. 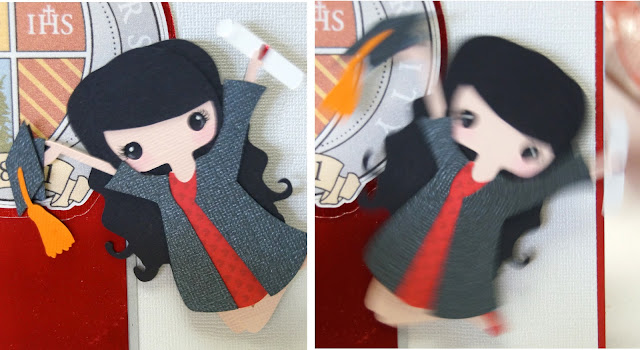 And of course, just like Patti's card, I couldn't resist adding a wobbler to the graduate so she'd really jump for joy! 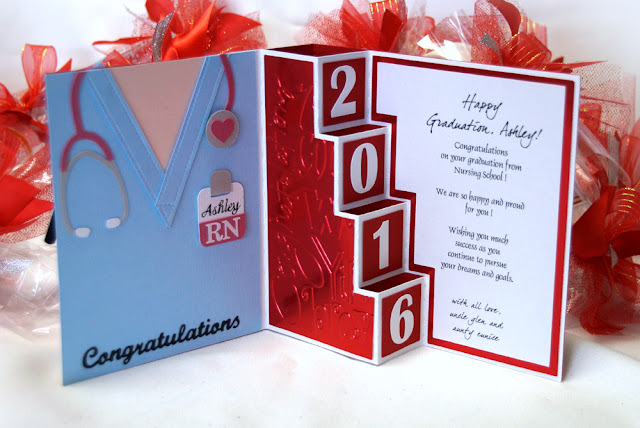 Here's the card on the inside with a Four Step Pop Up Card insert. I added the class year to the stairs using Make the Cut with Britannic Bold font. On the side panel of the stairs I used red foil board embossed with a Cuttlebug Congrats embossing folder. 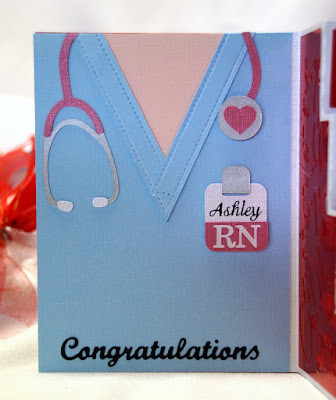 Then I added a paper pieced nurse's scrubs to the panel next to the stairs. Saw many cute cards for nurses with scrubs like this on Pinterest and just had to add one to my card too! Stethoscope and name tag were created in Make the Cut. I used a tracing wheel to create the faux stitching along the neckline of the scrubs, and an Elizabeth Craft Designs die for the "Congratulations". 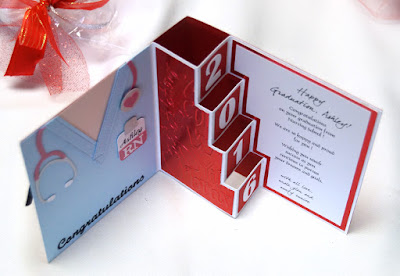 Here's the view from the top of the Four Step Pop Up card. Norma from From My Craft Room blog shares a great tutorial and template for this card here. 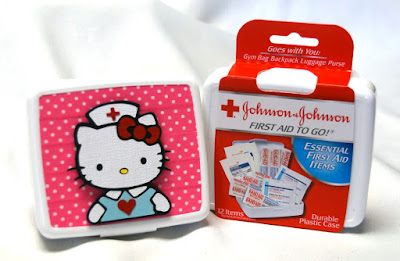 Then just for fun, I decorated a mini first aid kit with some washi tape and a paper pieced Hello Kitty dressed as a nurse. The inspiration for this comes from one of our wonderful customers at work who came by one day to bring several of these kits that she had beautifully decorated for us. These are fun and quick to put together, so I'm hoping I'll have time to do more soon. 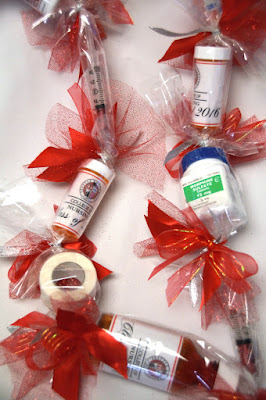 And finally here's the crazy lei I made for her. 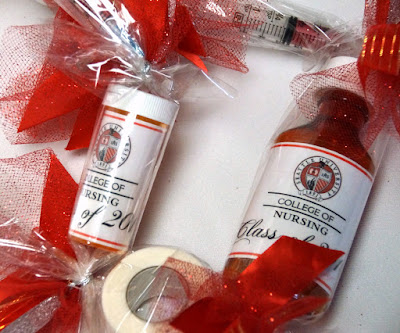 Not your typical flower lei, but instead one that's made up of oral syringes, a thermometer, bandages, and Rx bottles labeled with her school and class. I'm sure my niece will be getting lots of beautiful flower leis for her graduation so I'm hoping she'll get a kick out of this one from her crazy aunt and uncle...LOL!
2 comments: 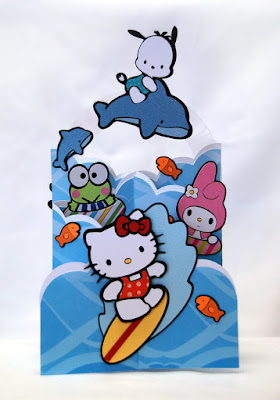 Finally got around to attempting another Cascade Card. Although I really like the look of Cascade Cards, I haven't made many because I always have such a difficult time figuring out how to decorate it. The idea for this card came about when I came across an image of Hello Kitty surfing that I thought might make a cute ocean themed birthday card for my crafting buddy Kris. 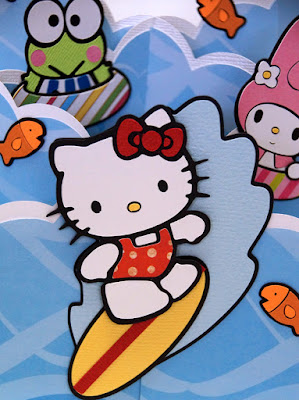 Like many of us, Kris is also a fan of the adorable Sanrio characters so after creating a cutting file for surfing Hello Kitty I started searching for more beach themed characters to add to her card. 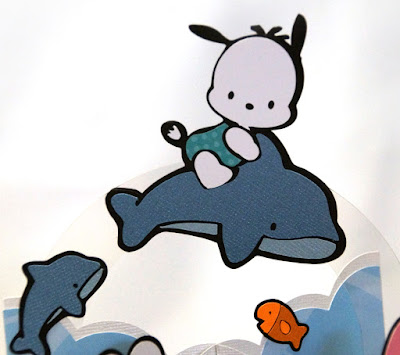 Found a coloring book image of Kris' favorite Pochacco riding a dolphin and used Make the Cut to render him into a cut file. After piecing him together, I attached him to an arc cut from clear acetate and glued the ends of the arc onto two of the panels of the card to make it look like the dolphins were jumping from the waters.

I used coloring book images of Kerokero Keroppi  and My Melody to create cut files and used basic shapes in Make the Cut to create their inner tubes. 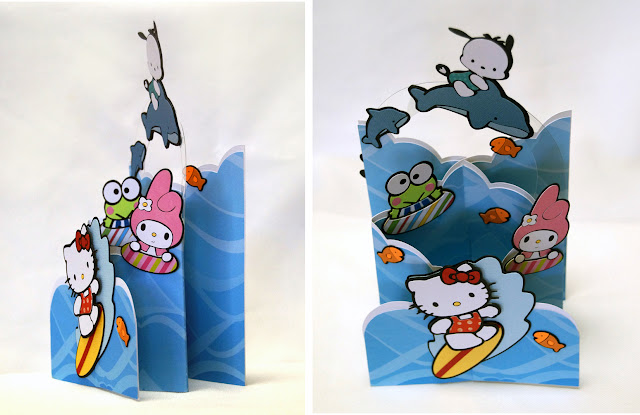 For the base card, I used a cutting file called "Stretch Card" from Little Scraps of Heaven found here, changing it up a bit by adding a scallop border to the top edge of the card.  Paper pieced little fishies are from Cricut Life's A Beach cartridge. 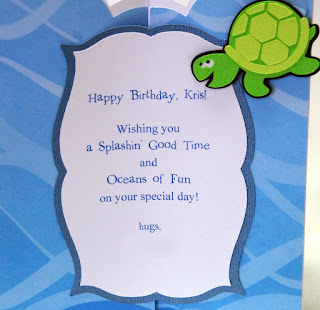 On the back of the card I used a freebie label cutting file created and generously shared by Heather M on her blog to add the birthday sentiment. Turtle is from Cricut Life's A Beach cartridge. The Cascade Card is always a fun card to put together. Nothing as fabulous as the amazing interactive cards Kris always comes up with, but I'm hoping she enjoyed this anyway.
2 comments: