Sister Stamps Chinese Zodiac: Year of the Dragon {and friends!} 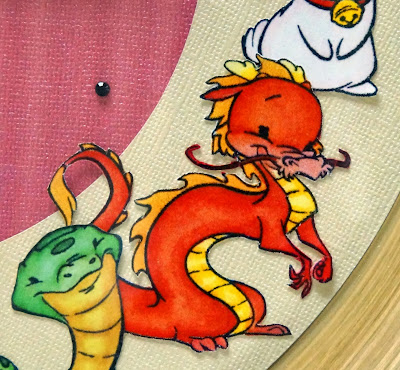 Today I'm sharing a project featuring the last of the twelve animals in the Sister Stamps Chinese Zodiac collection, the Year of the Dragon. Isn't he a cutie? LOL, not sure if dragons ever want to be called "cute" but you gotta admit, this one is really CUTE! He sorta reminds me of Mushu, the dragon from Disney's Mulan....but way CUTER!
My project today is actually one that I have been wanting to do from the very beginning when I first learned I would have the honor of joining the DT to introduce the fabulous line of Sister Stamps Chinese Zodiac collection. It includes not only the featured new Year of the Dragon stamp, but all of his other eleven zodiac animal friends as well... 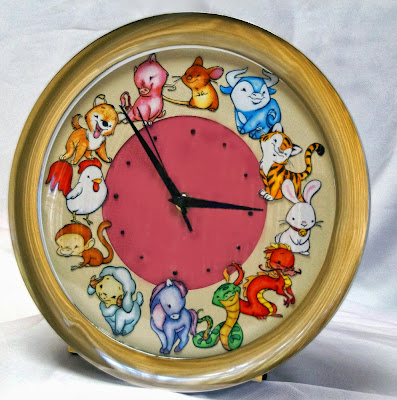 This was pretty much a simple project to put together. I used an inexpensive wall clock purchased from WalMart, took it apart and just replaced the face. Initially I had wanted to include the kanji characters for each of the animals, but ended up leaving them off since it was getting pretty crowded. The diameter of this clock face is 9-1/2 inches; and since my cardstock is 12x12, I really couldn't get too much larger.
I had my Silhouette cut the circles for the face from cardstock and after stamping, coloring and cutting out each of the zodiac animals, they were placed in the order of their years, starting with the Year of the Rat and ending with the Year of the Boar. Black flatback rhinestones were used for the hour markers.
Re-introducing (in order of year)... Year of the Rat, Year of the Ox, Year of the Tiger, Year of the Rabbit, Year of the Dragon and Year of the Snake...﻿﻿﻿ 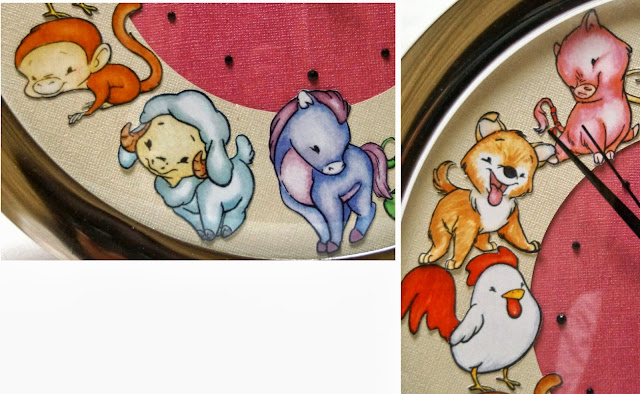 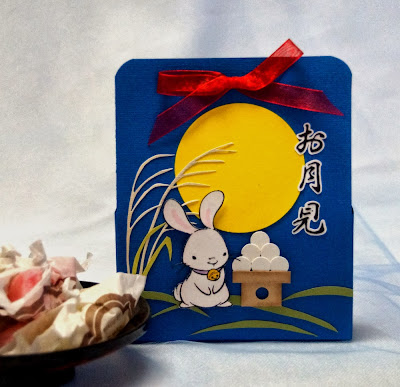 It's time for the release of the last two animals in the Sister Stamps Chinese Zodiac stamp collection, the Year of the Rabbit and Year of the Dragon. My project today is a Tsukimi gift bag featuring the adorable Year of the Rabbit stamp.
Around this time of the year, many cultures around the world celebrate the harvest moon. In Japan, the event is called "Otsukimi" or "Moon Viewing" Festival and is based on an old folktale about the rabbit in the moon. In this heartwarming tale, the rabbit offers to jump into a fire to provide himself as a meal to a hungry beggar (who is really the moon god in disguise). Touched by the rabbit's kindness, the moon god takes the rabbit back to live with him in the moon forever. And so to this day, when the moon is clear and full, the Japanese say you can still see the rabbit in the moon. During Otsukimi, displays of Japanese pampas grass or "susuki" are seen decorating homes and mochi dumplings (tsukimi dango) are offered to the gods for a bountiful harvest.  Families and friends gather to retell the story of the rabbit in the moon and celebrate, honor, and view the beauty of the harvest moon together. 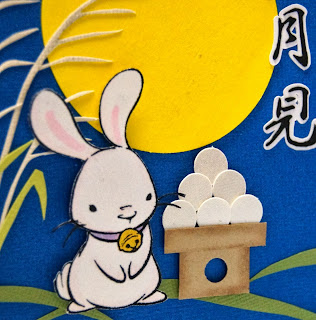 In addition to the new Year of the Rabbit stamped image, I added other traditional icons related to the Otsukimi festivities to decorate my gift bag. The tsukimi dango (mochi dumplings), offering tray and moon were simply created with circle and square punches; the pampas grass, and grass were handcut; and the kanji characters for "tsukimi" were cut on my Silhouette. 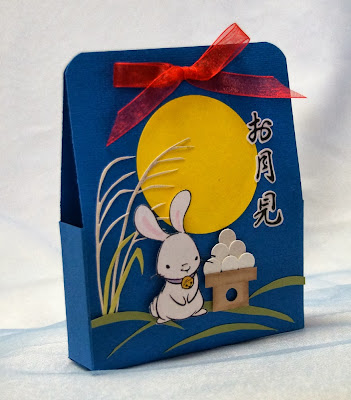 Thought this little gift bag would be cute to hold mochi and other treats for giving during the Otsukimi celebration.
For more fun and creative ideas using the two new Chinese Zodiac stamp releases, be sure to stop in to visit the blogs of the our other DT members as well as the Jenny at the Sister Stamps blog.  Don't forget to leave a comment over at the Sister Stamps blog for your chance to win this adorable Year of the Rabbit stamp! And hope you'll get a chance to stop by again tomorrow for our preview of the Year of the Dragon stamp...
Linda: Simple and Sassy Creations
Laura: By TKG
Patti:   Creations By Patti
Jenny: Sister Stamps Blog
6 comments: 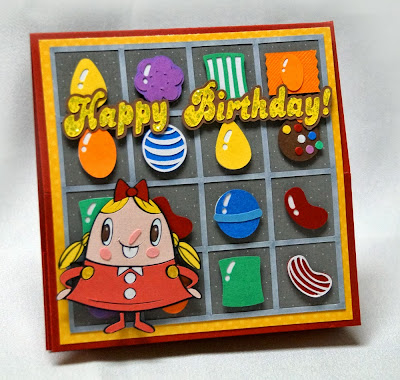 Are you hooked? *sigh* I shamefully admit that I have become one of the 15.5 million candy crushers across the world, swept in by the Candy Crush Saga craze. One thing I learned early on about this game is that you need Facebook friends who also play to provide the needed "tickets" to advance to higher levels of play. Lol, since I had no Facebook friends to ask I was sure that was the end of my candy crushing...till my dear friend Heather was the first to offer to befriend me and provide me with the needed tickets to continue my candy crushing addiction.
And so when Michelle Renee of Designs on Cloud Nine offered her cute "Sweet Additions" cutfile as a Friday freebie this summer, I quickly grabbed it, thinking it would make a fun card for Heather. (Though no longer a freebie, you can still get it for just 99 cents over at the Designs on Cloud Nine website.) 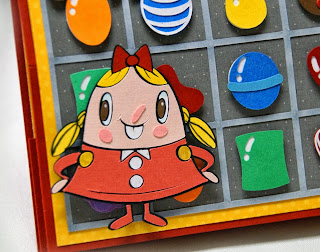 The cutfile for Tiffi (the main character of the game) was created and is generously shared by the extremely talented Shirley on her blog, Okieladybug's Scrap N' More. The layers and details on this cutfile are truly amazing!
After cutting, assembling and adhering all the candies and Tiffi in place, I used TR Candice font (free download from FontPalace) and MTC to create cutfiles for the phrases for my card. 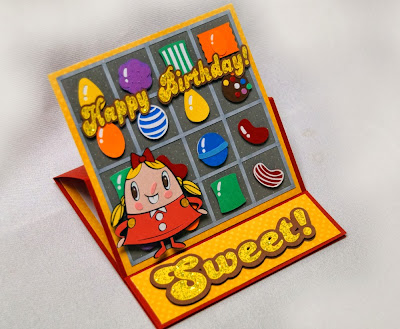 Added stickles for some shimmer and put everything together as a simple easel style card... 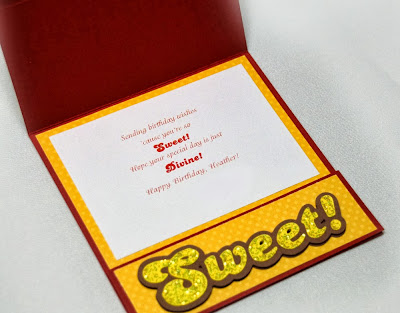 And here's the inside... Funny thing...despite all the many pieces, with the Candy Crush tune playing in my head the entire time, somehow this card came together really quickly!
4 comments: 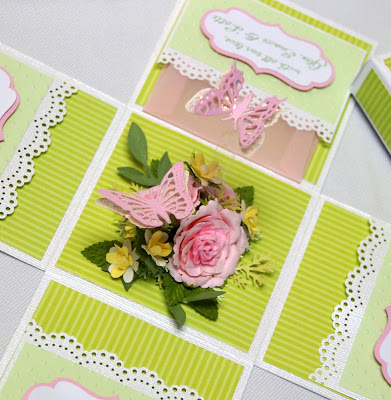 I've been totally in awe of the beautifully embellished explosion boxes created and shared by Monika on her blog, and was excited to try one for my mil's birthday. 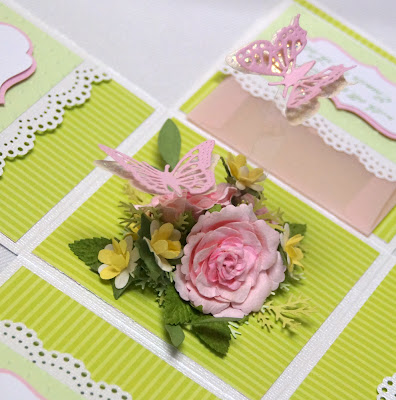 I only wish I had the time and skills to have created my own paper roses for this card, but since I was pressed for time, I used Prima roses and blossoms and leaves from All Natural Accents from my stash instead. 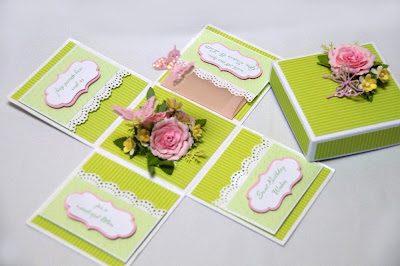 Butterflies were cut from Cheery Lynn Designs Small Exotic Butterfly set and put to flight above the blossoms with a strips of clear acetate. Box sides were embellished using a Martha Stewart doily edge punch and fancy labels with sentiments cut on the Silhouette. On one of the sides I created a pocket with a tiny pink vellum envie for a gift card or cash. Very simple, but the element of surprise you get when the cover is lifted and the sides drop is very cool. 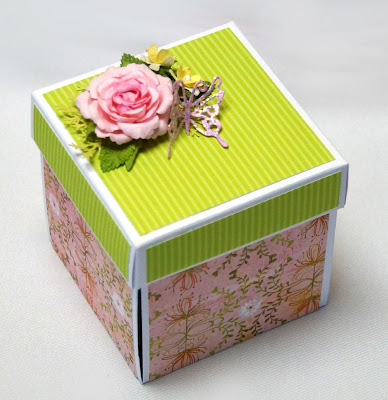 And here's the box closed up with it's lid in place...unfortunately I couldn't get the lid to fit snug enough so I ended up tying it up with some sheer ribbon and a bow to ensure the lid would stay put until it was ready to be opened. Had lots of fun putting this together...now I need to start practicing on making some paper roses so I can try this again!
3 comments: 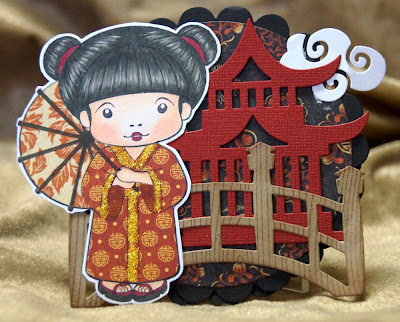 There's nothing much better than coming home after a long day at work to find an unexpected surprise in the mail. I received this fabulous thank you card from my dear friend Patti (of Creations By Patti) just a few weeks after I sent her birthday gift...WOW!
Patti used adorable little Kimono Marci in her intricately paper pieced kimono and umbrella, along with La-la Land bridge and pagoda die cuts, Taylored Expressions Build A Scene swirly clouds die, and Spellbinders Nestabilities to put this stunning shaped easel card together. 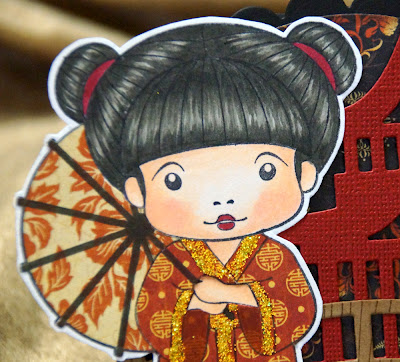 Patti's Copic coloring skills are just amazing and always inspires me to keep practicing! And don't you just love the perfectly coordinating patterned papers from Graphic 45's Bird Song collection that she selected for her paper piecing and background? 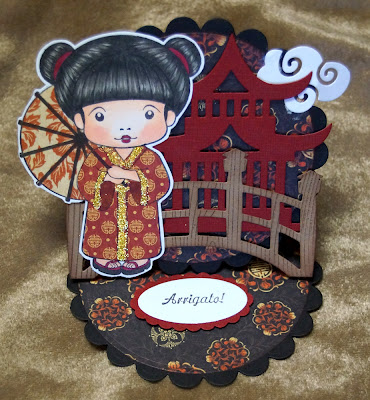 Here's the card opened up for display. Love, love, LOVE that I can keep this beautiful card displayed here in my craft room to look at and inspire me everyday. Thank YOU, Patti for making me feel so special!﻿
2 comments: 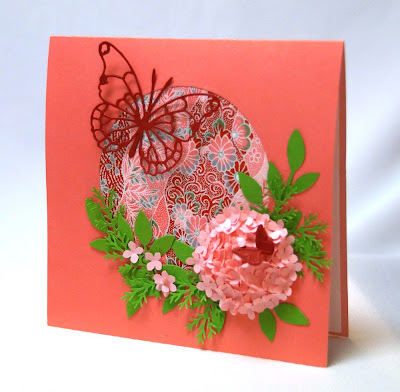 I can't even begin to tell you how excited I was to receive this beautiful card in the mail a couple weeks ago from my dear friend Gene. 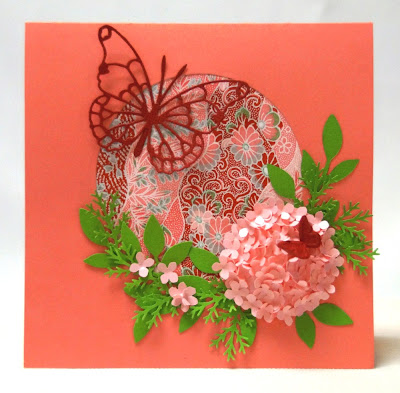 Gene is one very busy lady who doesn't get a chance to play in her craft room very often, but when she does, WOWZA! She always comes up with the most fabulous cards and paper craft projects. You really gotta see this card irl...everything about this card is truly amazing...the coordinating colors, the dimension, and all the details... 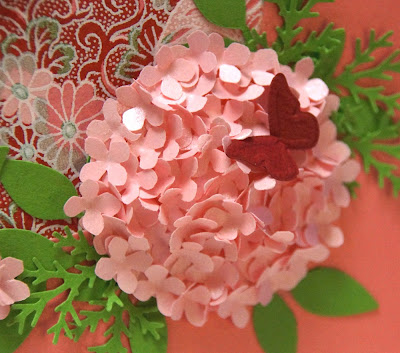 I am totally in awe with this pink hydrangea...wonder how many little blossoms it took to create this beauty? Hydrangeas are one of my favorite flowers. Did you know they come in many different colors? Not only the familiar blue and lavender, but also in shades of green and white and of course, my favorite color pink! Gene mentions in her sweet note to me that she used the tutorial by Kittie Caracciolo on her blog Kittie Craft to put this stunning domed flower together. Certainly a lot of time and love was put into this!
Thank you Gene! This beautiful keepsake shall be treasured always as a token of our sweet friendship!
﻿