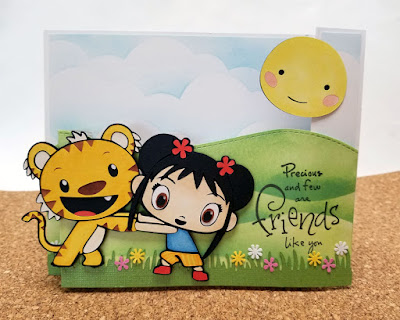 Do you remember the Nickelodeon interactive children's anime series, "Ni Hao Kai-Lan"? Although it only aired for two seasons, I thought it had a cute way of introducing Chinese culture to American preschoolers and was disappointed when it was cancelled. Anyways, I decided to bring little Kai-Lan and a few of her friends back in the form of a paper piecing on a birthday card for a very special friend. 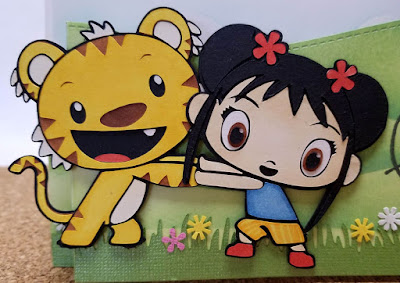 Downloading coloring book images found on the web, I used Make the Cut design program to render Kai-Lan and Rin Too the tiger into paper piecing cutting files. I used the Silhouette Cameo to cut all the pieces from black and white cardstock and colored the pieces with Copic pens while they were still on the mat. 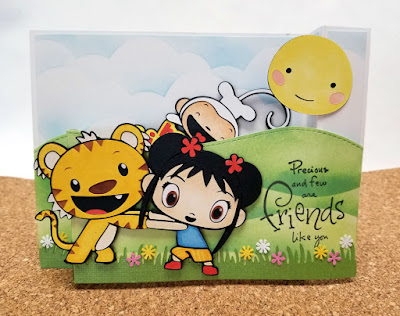 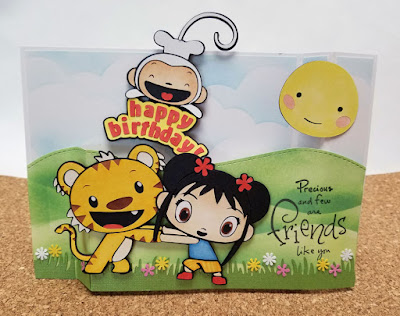 Decided to do another Wiper Surprise card. Pulling on the right and left sides of the card at the same time engages the wiper mechanism, and Ho-Ho the monkey holding a birthday message appears from behind the hills. 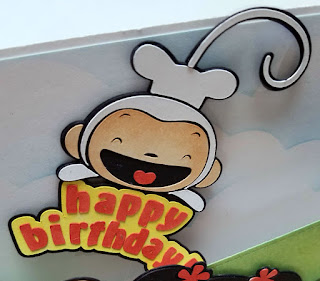 Played with cosmetic foundation brushes and Tim Holtz distress oxide inks again, this time to create the fun cloud and hills backgrounds. Lawn Fawn's Puffy Cloud and Hillside Border dies were used to cut temporary stencils for the inking and then the Hillside Border die was used again to cut the front panel to the card. A border of grass cut from Dienamics Grassy Border die was added to the bottom and embellished with tiny blossoms punched from Punch Bunch Mini Punches.
Ho-Ho the monkey and little Kai-Lan's iconic Good Morning Sun were also paper pieced from cutting files created from the coloring book images. 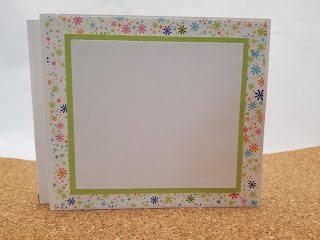 And lastly, I added a piece of blank cardstock bordered with patterned paper on the back of the card so I'd have a place to add a personal handwritten note.
No comments: 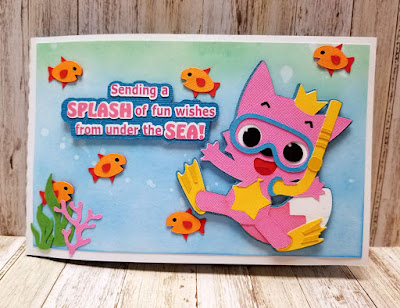 After creating the cutting files for the "Baby Shark" first birthday card I put together a couple weeks ago, I felt the need to make another Baby Shark themed card... for our granddaughter... just because! 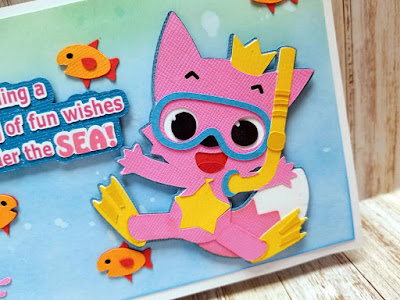 This time I created one additional cutting file, for the character, "Pinkfong" and added her to the front of the card together together with a school of tiny fish from Cricut Create A Critter cartridge. 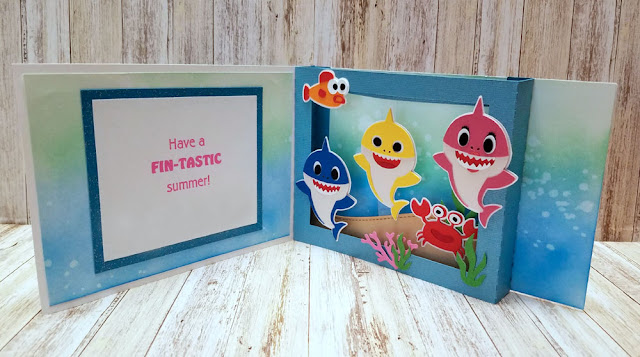 Inspired by Francis Byrne's fun ocean shadowbox card I decided to add a shadowbox in my card too, where I placed Baby, Mommy, and Daddy Shark and friends. Seaweed and coral are from Cricut Life's A Beach cartridge. 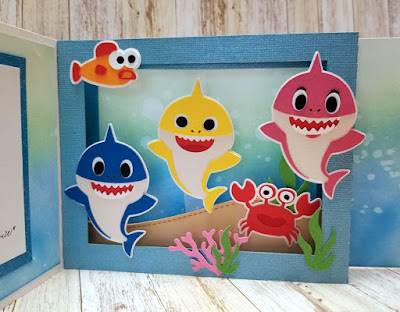 Lawn Fawn's Stitched Hillside border die was used for the sand and attached to the center strut in the shadowbox together with Baby Shark and a funny crab friend. 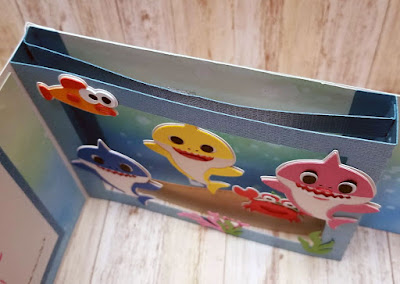 Labels: Shadow Box, Thinking Of You 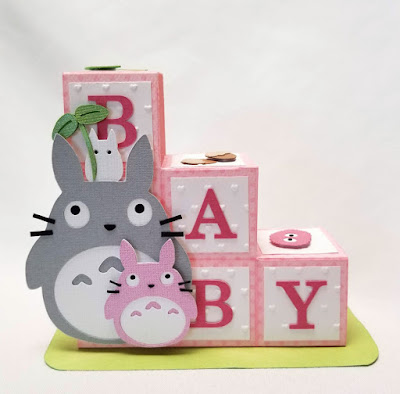 When our dear friend who had a Totoro themed baby shower a few months ago gave birth to her beautiful baby girl, I just couldn't resist following up with another Totoro card. 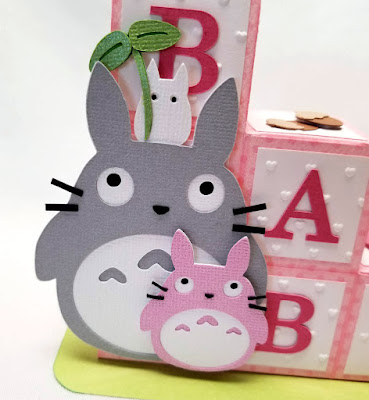 I used the same Totoro cutting files I created earlier for her shower card, but changed the orientation and colors (pink!) and placed the paper pieced Totoros onto a Block style card. 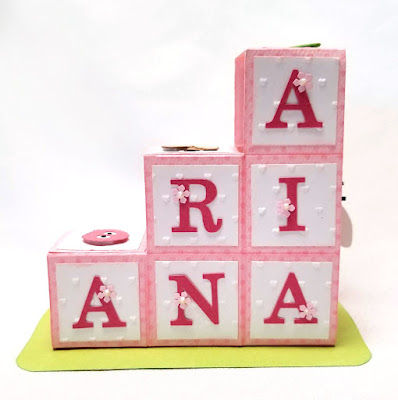 Times New Roman font was used to spell "B-A-B-Y" on the front and baby's name, "A-R-I-A-N-A" on the back of the card. Panels for the blocks were cut from white card stock and run through a Cuttlebug heart embossing folder for texture. Tiny flowers to embellish the alphas were cut using a Punch Bunch mini flower punch and I used Ivory Seashell Nuvo Crystal drops for the flower centers. 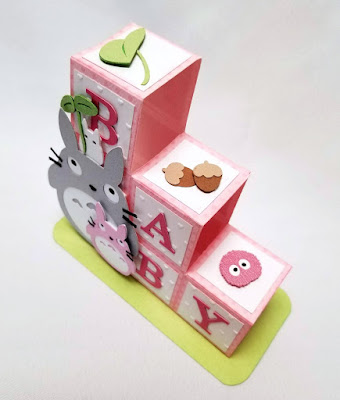 To the tops of the blocks, I added a few paper pieced icons related to the Totoro story (yes, I finally got to watch the movie!), a leaf, acorns and a dust ball. 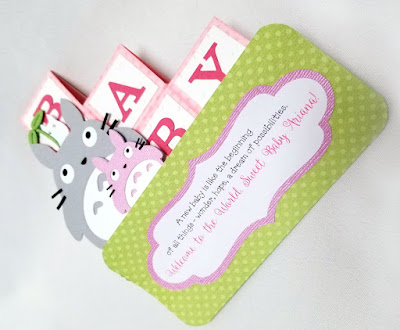 The Blocks card easily fold flat for mailing and I added a sentiment to the bottom panel. There are several tutorials on this type of card online, I really liked this one by the Janie, the Craft Princess from Crafter's Castle blog because she explains the "mathematical formula" for the card template so you can enlarge or shrink the card size to your own personal preference.
No comments: