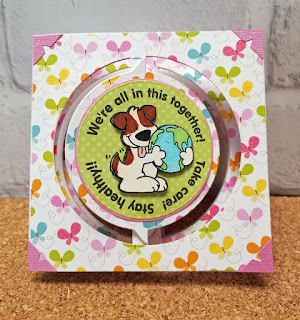 As the grim reality of the pandemic loomed worldwide, several craft and stamp companies generously offered freebie digital images so we as crafters could use our time sheltering in place to keep busy creating projects to send our appreciation to essential workers or sentiments of hope and reassurance to our friends and loved ones. I personally thought Dandelion Designs came up with three of the cutest images which would be perfect for bringing smiles to kids of all ages. 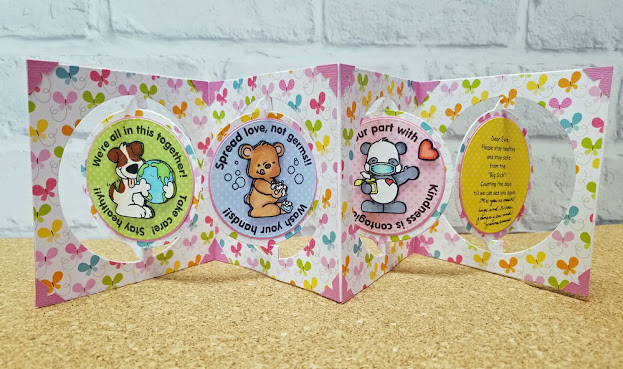 As soon as I saw the Dandelion Designs medallion shaped images, I knew right away I wanted to use them to make an accordion style card for our granddaughter. She and her mom have been making and coloring a lot of rainbows lately... chalked sidewalk rainbows, watercolor window rainbows, and crayoned rainbow greeting cards... so I chose colorful Doodlebug butterfly papers and Bobunny Double Dot cardstocks for my card to stay with a rainbow colored theme. 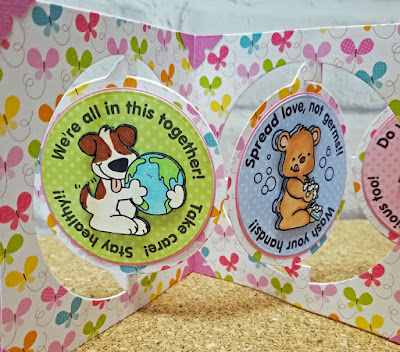 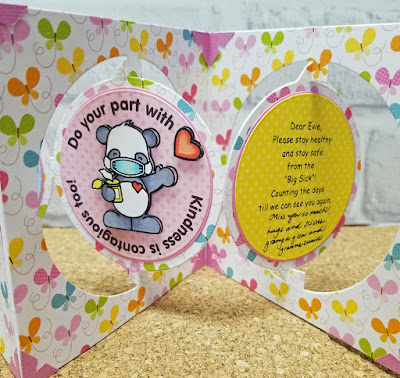 I then used foam tape to adhere each of the colored fussy cut images onto each of the printed die cut circles to add some fun dimension. The accordion card base was cut from an Elizabeth Craft Design die designed by Karen Burniston. As a final touch I added photo corners created in Make the Cut Design program and cut from pink glitter cardstock to each of the panels. 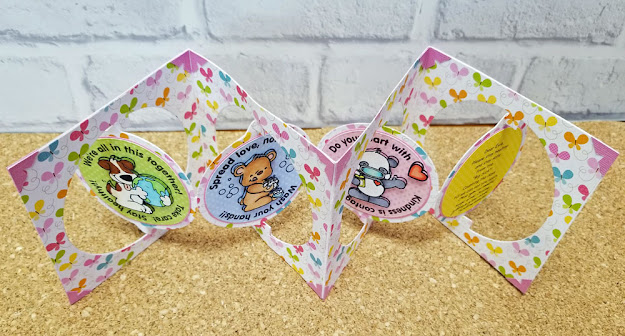 My heart goes out to parents of young children who are faced with the challenging task of trying to explain and make sense of Covid 19 and the pandemic to them. Reasons and reminders of keeping safe are not always easy to explain. I'm told our three year old granddaughter understands Covid 19 as "the big sick", but sometimes has to be reminded about how to keep safe. Hoping this little card will serve as a happy reminder for her to wash her hands and keep her mask on.
1 comment:

Labels: Accordion Card, Thinking Of You 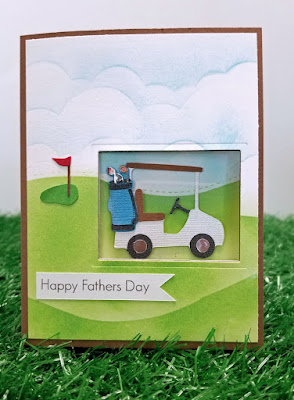 Just when I thought my brain absolutely could not, would not, come up with another golf themed card for hubby, I somehow managed to pull it off once more just in time for Fathers Day. 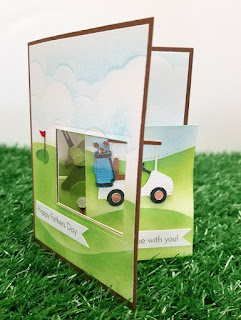 Thank you, Karen Burniston and her Rockin' Rectangle die for sparking the mojo! I kept the front of the card very simple, creating a golf course scene using hillside and cloud border dies to create stencils and distress oxide inks applied with cosmetic foundation brushes. I added a window just large enough for my paper pieced golf cart to show through. 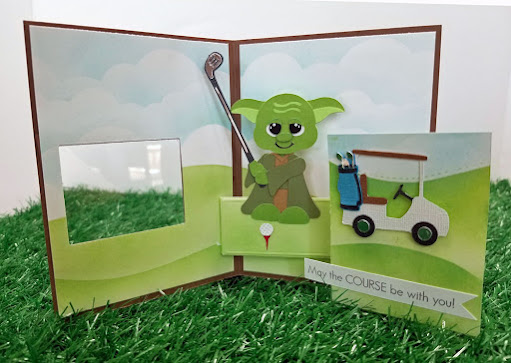 When the card is opened, the panel with the golf cart on it pops up and "rocks" to the right, revealing a golfing Yoda. Sentiment reads, "May the COURSE be with you!" Just the card every golfing Star Wars fan would love, right? 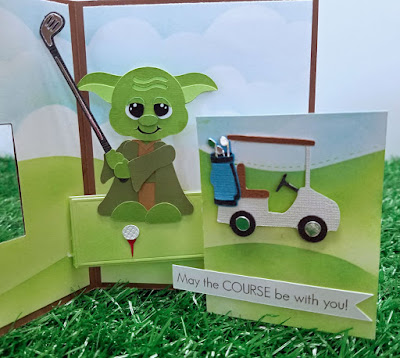 Yoda was pieced together using a svg cutting file called Galaxy Cuties from Cuddly Cute Designs and golf cart was cut from Cricut's Everyday Paper Dolls cartridge. Hoping this card will bring a smile to hubby's morning as he and his friends head out to spend an enjoyable Fathers Day on the golf course.
1 comment: 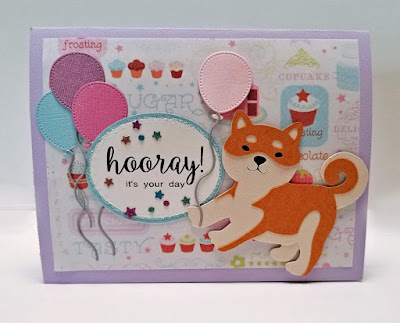 Today is my sister in law's birthday, so I can safely share the card I made for her without worrying about being a spoiler. She owns the sweetest Shiba Inu furbaby that the whole family adores, and I have come to learn that she likes the Shiba Inu themed birthday cards I make for her the most. So of course, I had to go with yet another Shiba Inu themed card again this year...

Here's a short video clip of this fun wiper card in action...
The double wiper mechanism inside the card was cut using the i-Crafter Wiper Insert die. Currently there are, I think, 4 versions of this die; they all have the same double wiper mechanism with the main difference between them being the different elements that you can attach to the wiper arms. 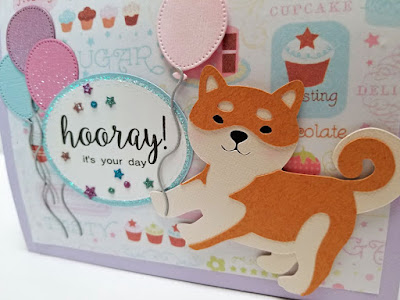 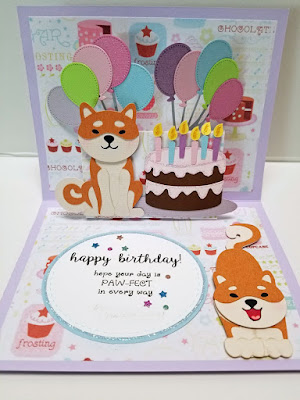 As the card is opened, the two wiper mechanisms on either side of  the small pop up insert panel swing up to bring the two bunches of balloons toward the center of the card. 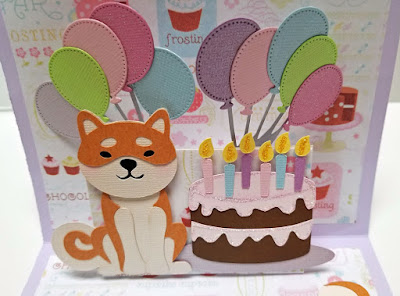 I added a paper pieced Shiba Inu and birthday cake from Miss Kate's Cuttables to the center pop up insert panel and used Stickles to add a bit of glittery bling to the birthday cake and candles. 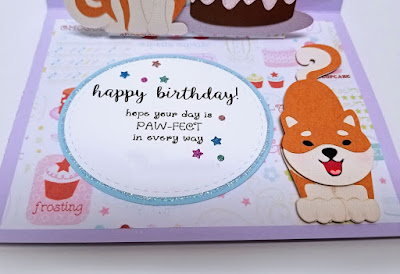 Really having fun with this double wiper insert die from i-crafter. I like that it is very generic so you can can attach anything you please to the wipers to create a fun interactive card. And the best part of all is that it's super quick and easy to install! Looking forward to playing with this die a lot!
1 comment:

Celebrate with Pochacco and Hello Kitty 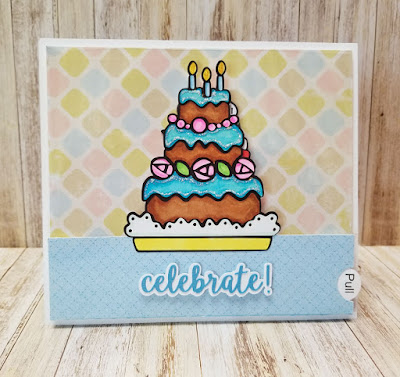 I decided to make yet another Pochacco themed birthday card for my very special friend Kris who loves Pochacco. We both enjoy interactive cards so I thought I would try making a slider style card similar to the ones shared by the very talented Anita Chang on Instagram.

Happily, I was somehow able to convince hubby once again to help me do this very short video to show this slider card in action. Sometimes words and still photos just aren't enough! 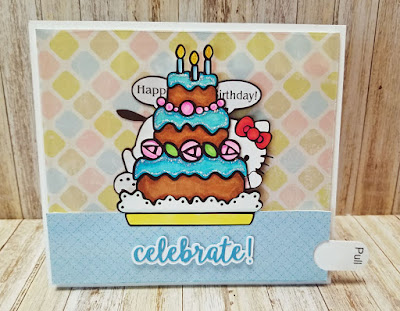 As the tab on the right side of the card is pulled, 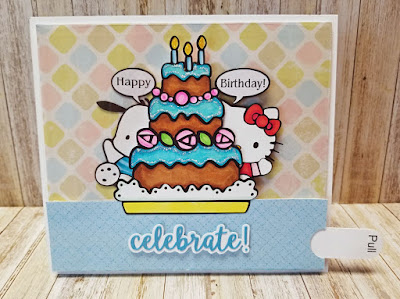 ... little Pochacco and Hello Kitty appear from behind the cake with Happy Birthday wishes!

I followed  this video tutorial by Karolyn  Loncon of My Favorite Things for creating an interactive double slider card to make this card. The only difference being that I adhered my sliding elements (Pochacco and Hello Kitty) to the center of the slider at the start position so they would slide away from each other rather than toward each other as in Karolyn's card.
After everything for my card was assembled and was glued in place, I discovered that Pochacco and Hello Kitty weren't sliding out from behind the cake smoothly because they kept getting tangled when they slid back behind the cake. To remedy this I had to adhere a panel of clear acetate to the top of the sliding mechanism to separate Pochacco and Hello Kitty. Difficult to see from the still photos, but Hello Kitty is in front of the acetate panel and Pochacco is behind the acetate. 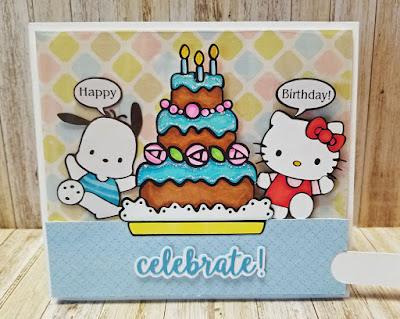 Pochacco, Hello Kitty and the tiered birthday cake are coloring book images which were rendered into cutting files using Make the Cut design program. Everything was cut from white and black cardstock and colored with Copic markers. "Celebrate" cut file was also created in Make the Cut using Ballerina true type font. I added Stickles glitter to the frosting and candles for a festive bling. 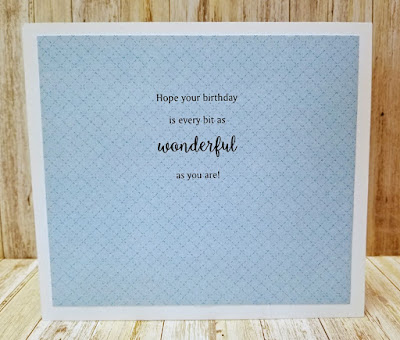 Here's the back of the card where I added the birthday sentiment. Putting this card together was quite a learning experience. I'm not entirely pleased that I had to add the panel of acetate between the two sliding elements, but unfortunately that was the only solution I could think of to get the card to work smoothly. Paper pieced images tend to have more catch points than stamped images so maybe next time around I'll experiment with stamped images instead.