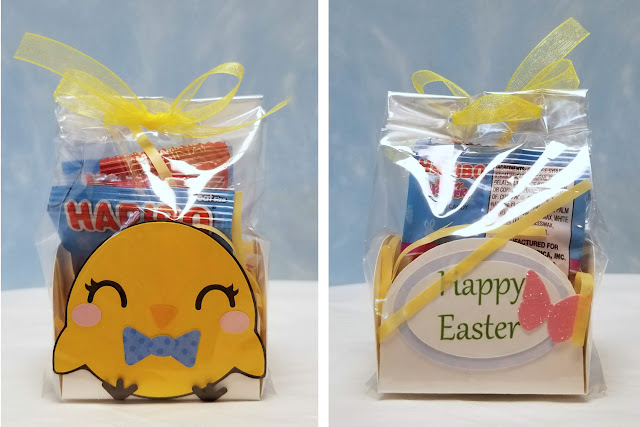 So excited to share some of the sweet treats I received this Easter from crafty friends Lorna and Kris. This adorable chubbie chickie box filled with goodies was created by my dear friend Lorna. 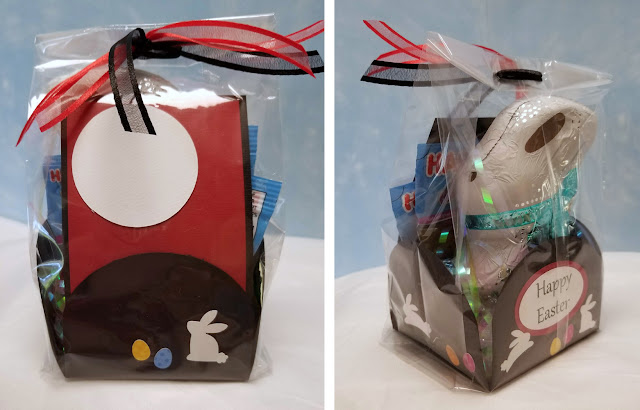 And this treat box is yet another example of Lorna and her always amazing "outside the box" creative brain. Here she paper pieced a Japanese Hanafuda playing card and added little bunnies and colorful Easter eggs, bringing to mind popular Asian folklore about a rabbit in the moon. 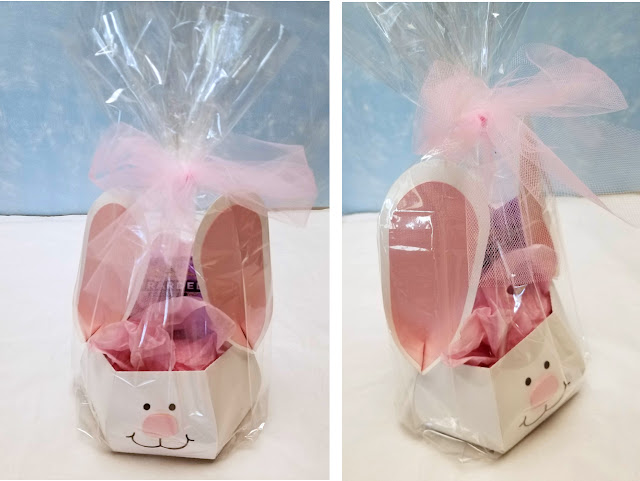 This huge bunny basket filled with yummies was put together by sweet Kris. This bunny has super long ears that make him look so adorable, and which are cleverly attached to his head with a pair of brads. Cutting file for this cute Big Bunny Basket can be found over at My Scrap Chick.
No comments: 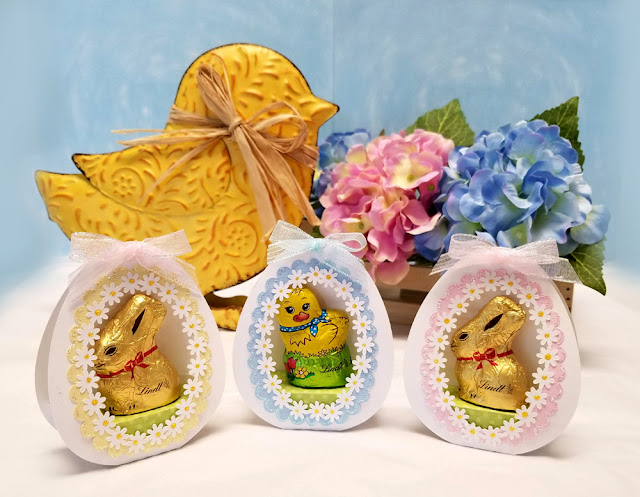 Happy Easter! I hope everyone is enjoying Easter Sunday with dear friends and family. I always have fun putting together little treats for sharing with friends during Easter. 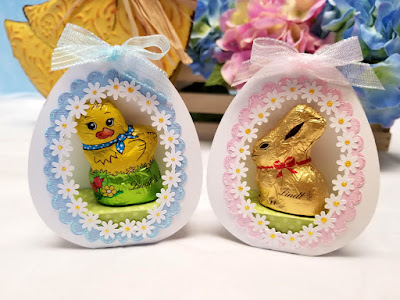 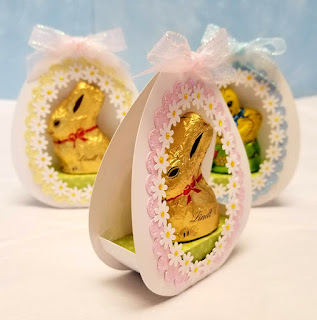 This year my favorite Lindt Gold Bunnies, Chicks and Lambs were rather scarce at the stores in my area.  Luckily I bought a few packs early in March when I first saw them at the store. But by the time I finally got around to creating the cutting file for these "sugar egg" displays in April, these little Gold Bunnies were nowhere to be found. I did make 15 of these but really would have liked to make more. 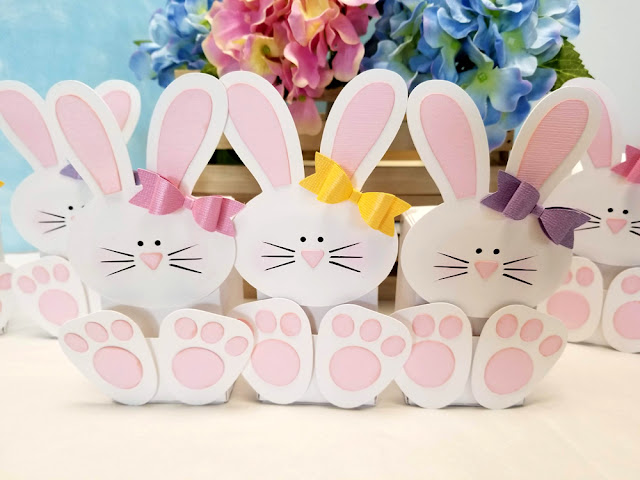 I also put together  several of these fun bunny candy dispenser boxes. 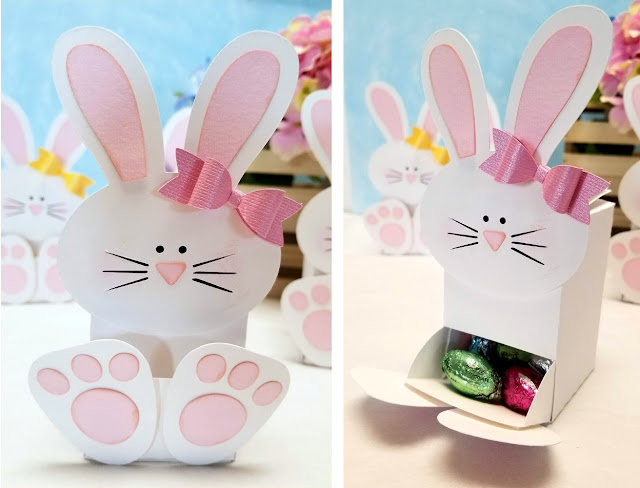 I used the cutting file for the Monster Treat Dispenser box from My Scrap Chick to create an Easter bunny version of the candy dispenser box. After experimenting with a few other templates for similar dispenser type boxes, I found that the mechanics and engineering of the box design from My Scrap Chick (in terms of ease of opening the flap and sturdiness) was the best. Cute bunny face and feet cutting files are from the Lori Whitlock Store. 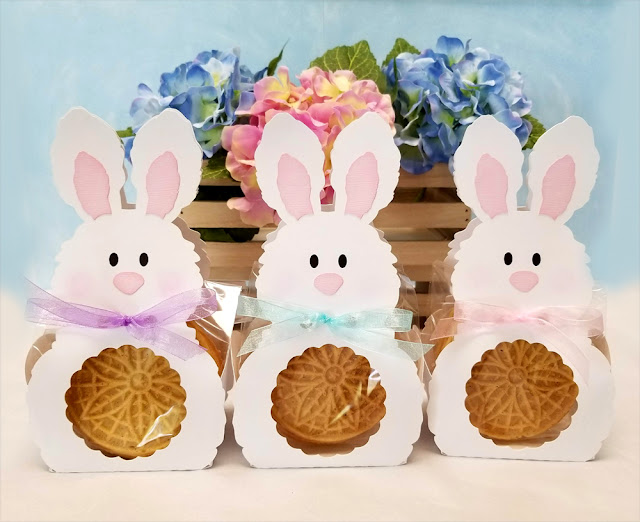 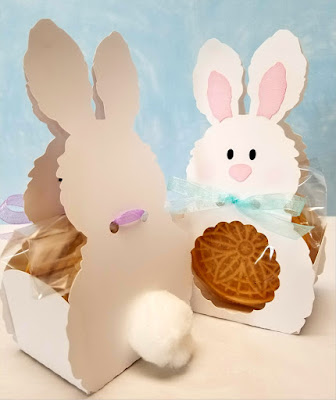 My third Easter treat box was made to hold my mini Pizzelle cookies. Would you believe these bunny boxes were originally intended to be lollipop holders? I used My Scrap Chick's Bunny Lollipop holder cutting file and enlarged it to be large enough so my Pizzelles could peek through bunny's tummy where the lollipop normally would. I then added a 2-1/2 inch gusset to each side so the box would be wide enough to hold half a dozen cookies. I had just enough time to make two batches of cookies and 15 bunny boxes to share with friends and family. 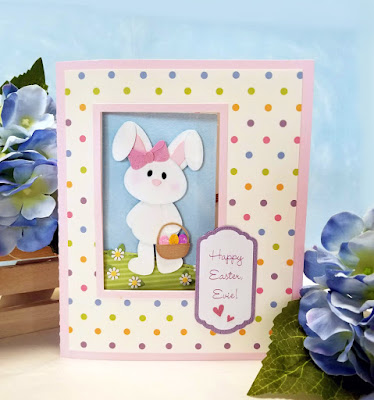 For our Easter card for our Granddaughter, I just couldn't resist using Karen Burniston's Spinner Square Pop Up die yet again. 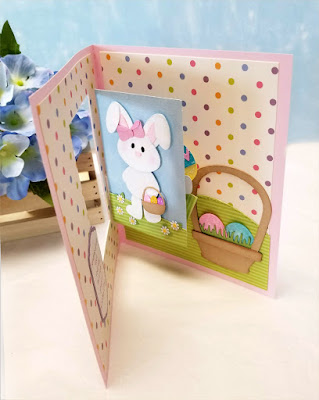 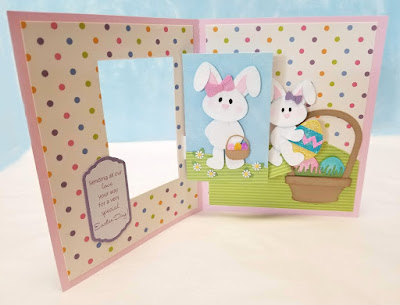 As the card is opened, the panel with the paper pieced bunny pops forward and another little bunny peeks out from behind to add a colorful Easter egg to the basket. 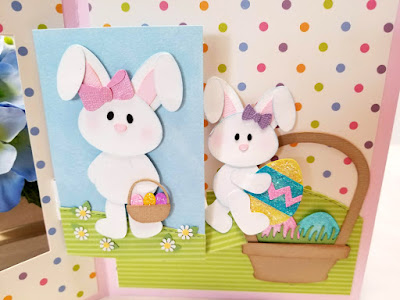 So how FUN is that! At first I was feeling a little guilty because I had used the same spinner square pop up die to make her Girls Day card last month... but then again, I figured our little granddaughter probably wouldn't mind too much... LOL! Happy Easter, everyone!
1 comment: 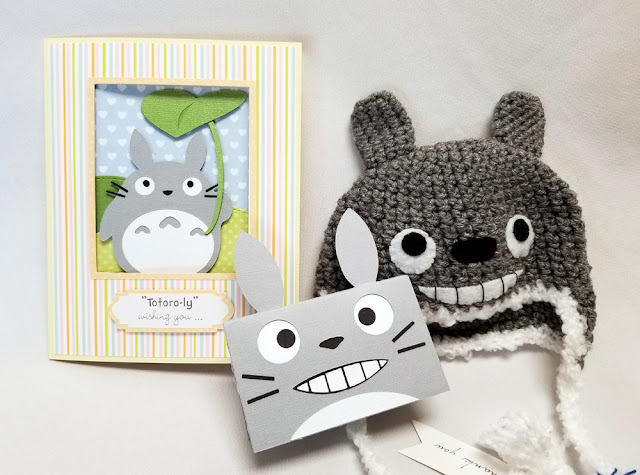 I got so excited when we were invited to a baby shower for a close family friend... and I got even more excited when I saw the Totoro themed shower invitation! Although I admit I haven't even seen the movie yet or gotten much into Totoro fandom, he is quite a cute furry character and I was happy to have a chance to craft with him. 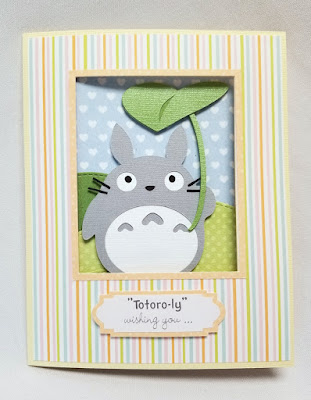 Found quite a lot of cute Totoro images online so I rendered a few of them into cutting files in Make the Cut Design program. Decided to use Karen Burniston's Spinner Square Pop Up die again to make a fun interactive card. 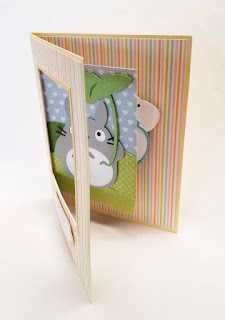 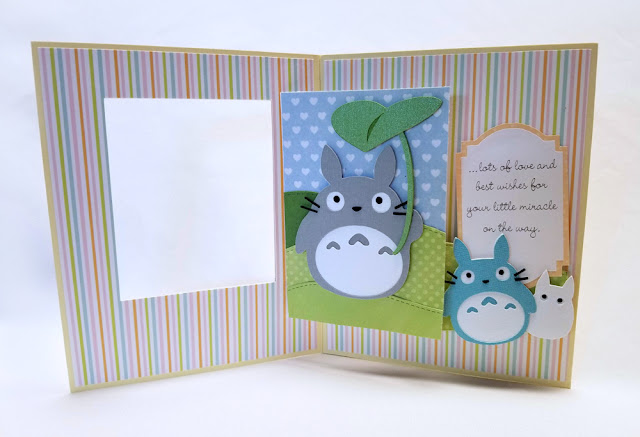 As the card is opened, the panel with Totoro pops forward and Chuu and Chibi Totoro appear from behind with the sentiment. Still having so much fun with this little pop up spinning mechanism! Takes a little effort to get everything sized and placed in the right position in the card, but so worth the effort! 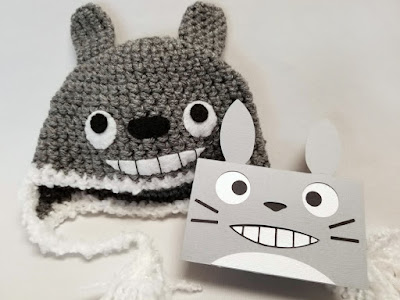 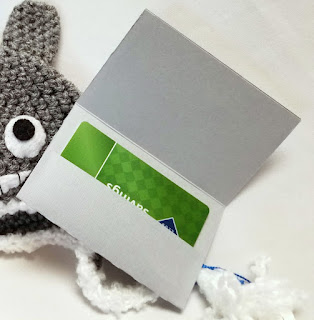 For our gifts, I found this adorable crocheted cap made by AmiAmigos on Etsy and made a matching Totoro gift card holder which was inspired by a Totoro handmade card I spied on Pinterest... and... 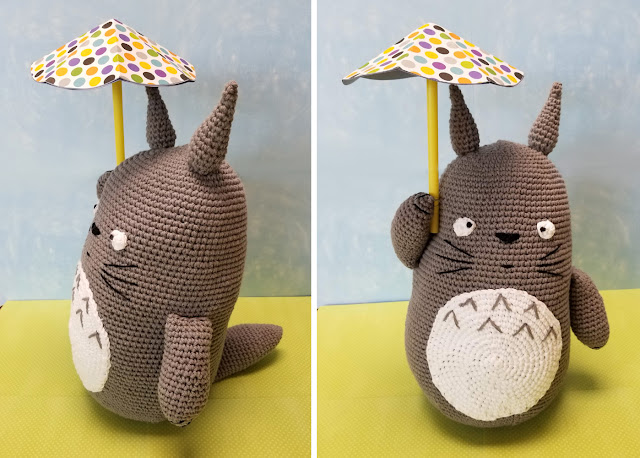 Lookie at this totally kawaii amigurumi stuffed Totoro! He was created by my crafty friend Lorna's daughter... creativity definitely runs in their family! He is so very huggable and even has a little bell inside his tail so he jingles everytime you pick him up!  Little baby to be is gonna look so adorable with her Totoro cap and toy.
1 comment: