Love You To The Moon And Back! 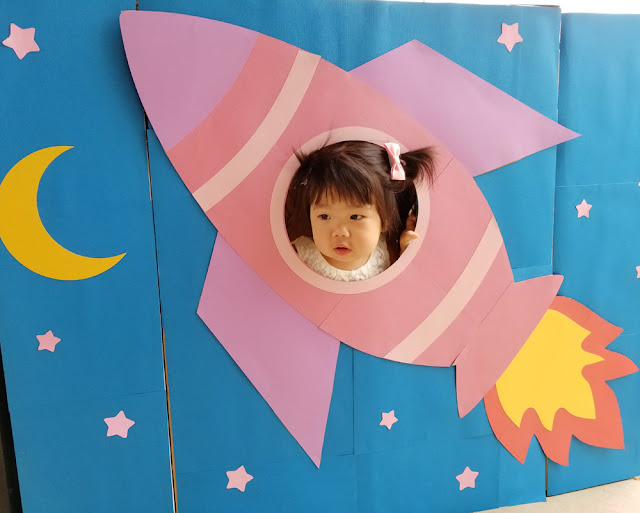 Just got back from visiting and celebrating our granddaughter's first birthday on the mainland. So hard to believe a year has already gone by since she was born! Her mommy and daddy held a  fun party at their neighborhood park to celebrate with some family and friends. The theme of the party was based on one of her favorite books, "Love You To the Moon And Back"! Sharing some of the fun projects I had a chance to put together, like this rocket photo booth using that theme... 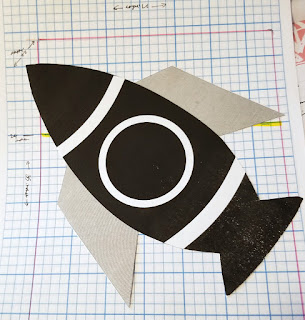 The initial rocket ship image I wanted to use was designed in Make the Cut Design Program. From there I printed the image out and placed it on graph paper so I could get an idea of how large it had to be to fit a small child. 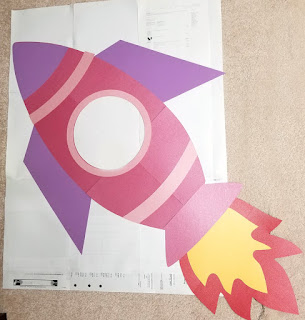 The image was then enlarged in Make the Cut and had to be cut in sections, limited to what could be made to fit onto sheets of 12 x 12 cardstock. I believe it took a total of 25 sheets of cardstock for a rocket of this size. 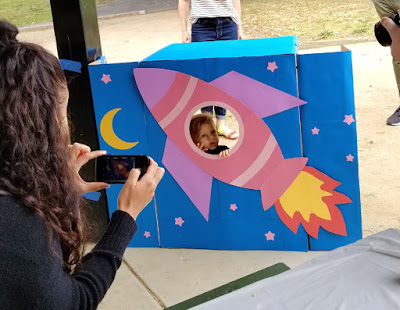 We took all the cut pieces with us and reconstructed the rocket onto two oversized boxes once we got to my daughter's place. One box in the center for the rocket and a second box sliced lengthwise to add the the sides. Picked up a pack of blue cardstock at Joann's to cover the boxes for the background sky. 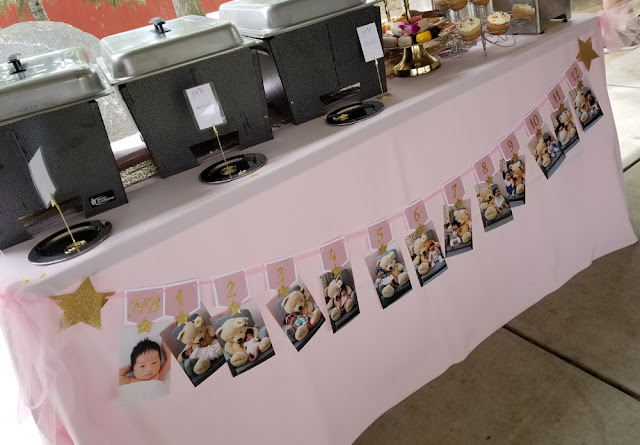 We also put together this fun banner to decorate the main buffet table. Each flag was labeled with a number from 1 thru 12 with a photo of Evie clipped on which was taken during each month of her first year. Her parents took photos of her with the same teddy bear on the same rocking chair every month so we could see how much and how quickly she grew! 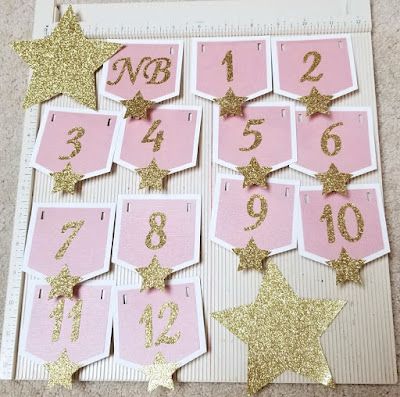 These were very easy to put together, using basic shapes to create the flags and stars. Flags were cut from pearlized cardstock and stars from gold glitter cardstock. Mini clothespins were glued onto the backside of the stars  so the photos could be clipped on to them and everything was strung together onto pink tulle. 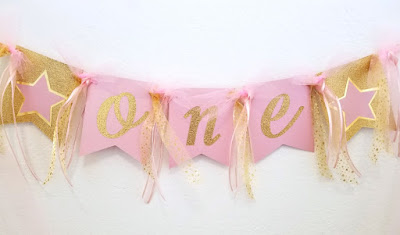 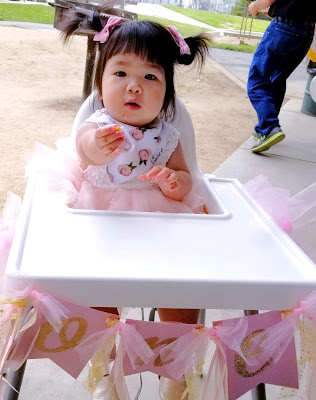 I also made a second smaller banner to be draped around Evie's high chair at the party. 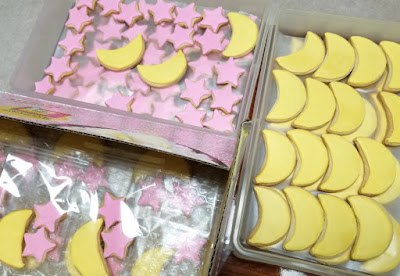 And these are the yummy and amazing cookies baked and beautifully decorated by our super sweet and dear friend Heather. She painstakingly baked and frosted over sixty sets of these so we could use them as favors for Evie's party...thank you so much, Heather! 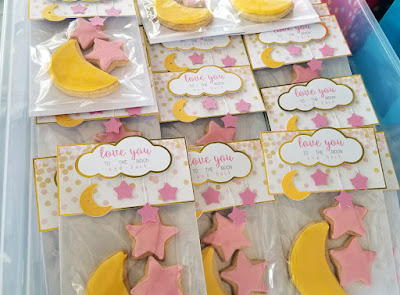 We sealed each set in cellophane and packed them in boxes to hand carry onto the plane, then added the headers to the bags later when we got to our daughter's home. 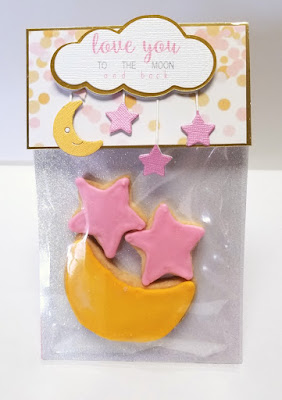 We used glittery white cardstock for the back and added a header with a cloud and hanging moon and stars. The cloud, moon and stars were cut using a thin metal die. The cloud shaped label with the words, "Love you to the moon and back" was printed and cut using the Print and Cut function on the Silhouette.
Happily the weather held out and everyone seemed to have enjoyed themselves at the party. I had fun putting together the few things for the decor and favors and am looking forward to helping with many more years of themed birthday parties as our granddaughter grows up. 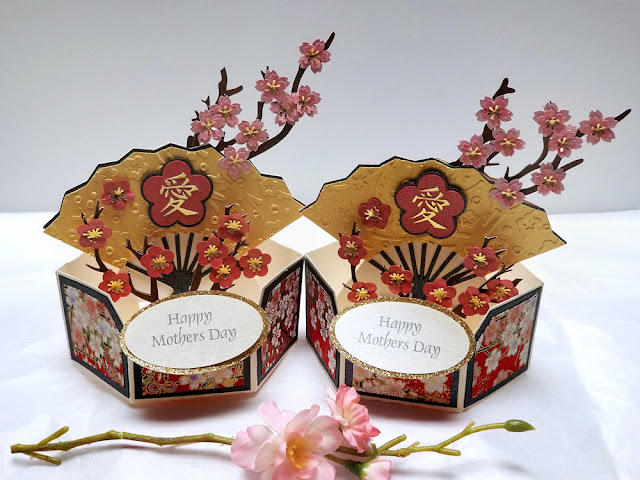 Happy Mothers Day!  These are the cards I put together for the two very special ladies in our lives we call "mom" whom we love dearly. 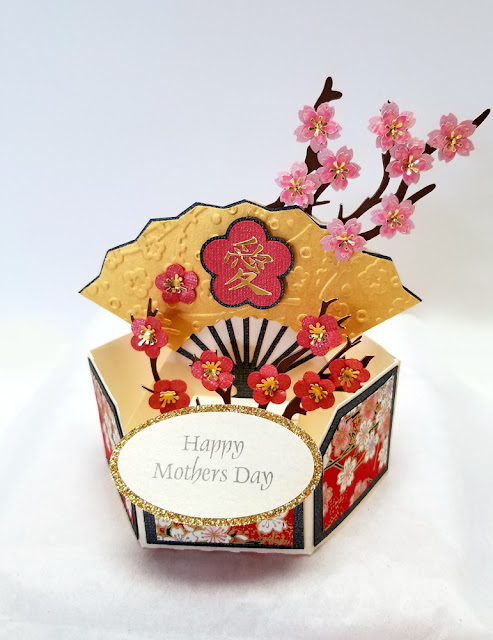 This was my second take at the fun Hexagonal Pop Up Card devised by the creative mind of Jay Soriano from Mitosu Crafts. The first time I tried this, I added a handle to it to make an Easter Basket card for my granddaughter. This time I decided to stay with the original idea of using this as a kind of vase to hold the branches of plum and cherry blossoms. Jay's You Tube video tutorial for this  amazing pop up card created with Stampin' Up's Sizzix Window Box Thinlits die can be found here. For my version, I cut away about 3/4 inch off the top of the front panel of the hexagon box so I could add the "Happy Mothers Day" oval label without obstructing the view of the blossoms. 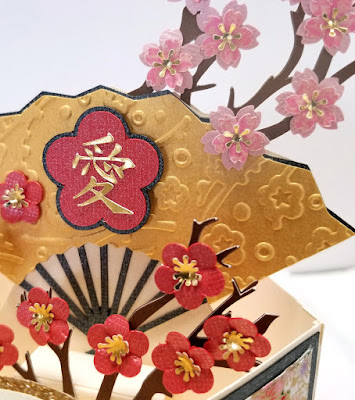 For the fan, I used the cut file from Cricut's Pagoda cartridge and ran the top gold layer through the Cuttlebug Plum Blossom embossing folder. I also added a flower shaped medallion with the kanji character for "love" to the front of the fan. Branches are from Cricut's Home Decor and Gypsy Wanderings cartridges, and both the plum and layered cherry blossoms were cut using Carl punches. The gold flower centers were cut with Punch Bunch mini punches. 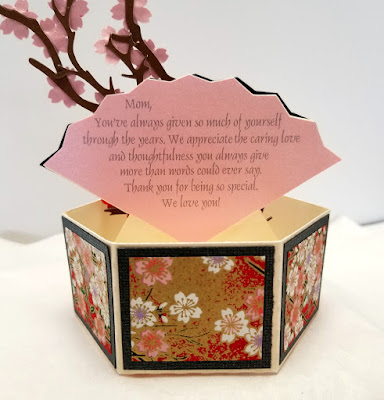 I used washi paper backed with black cardstock to decorate the six panels on the box and added our Mothers Day sentiment to the backside of the fan. 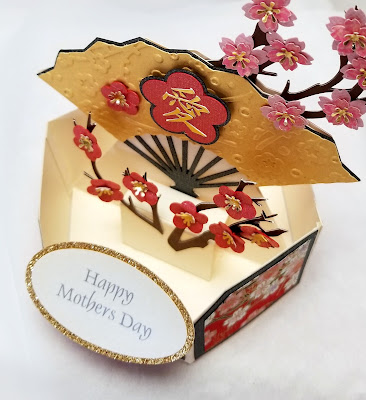 Here's a view from the top which shows how the fan and flower branches are adhered inside the box. If you look inside, you'll see I also added an extra pop up box and attached it to the center panel to create a second layer of dimension. The plum blossom branches were glued on to this so they would sit in front of the fan. 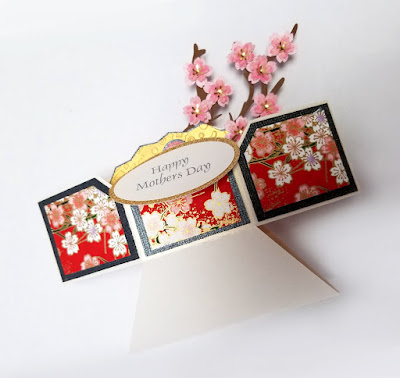 And finally, here's the same card folded flat, ready to be slid into an envelope. The base for this pop up card is really easy to assemble. It can be decorated to be clean and simple or as elaborate as you choose...either way it's a "wowza" card...guaranteed to get lots of "wows" from the recipient!   We're planning to take our special moms to lunch this week and give them their cards and gifts at that time, so hopefully there won't be any issues with "how do I open this card"? 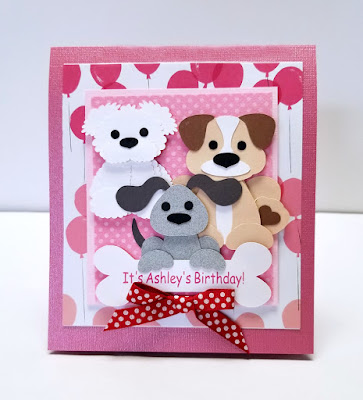 I decided to go with another fun doggie themed card for my niece's birthday again this year. 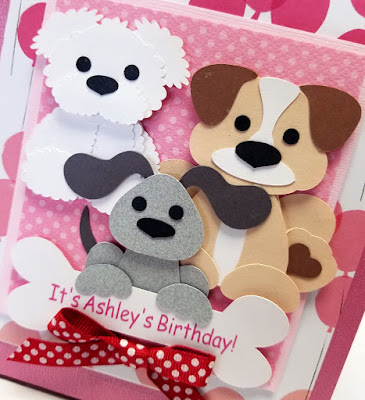 I decorated the front of the card with three paper pieced puppies.  Aren't they adorable? Cutting files for these cuties are from Treasure Box Designs  now retired Dog Collection Sets 1 and 2. Print and Cut function in Make the Cut design program was used to add the sentiment and cut the bone. 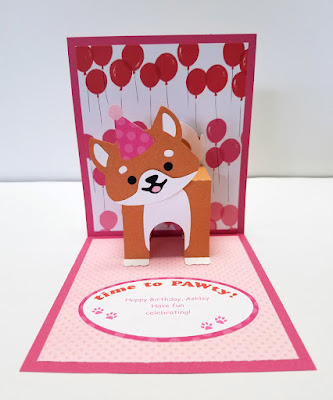 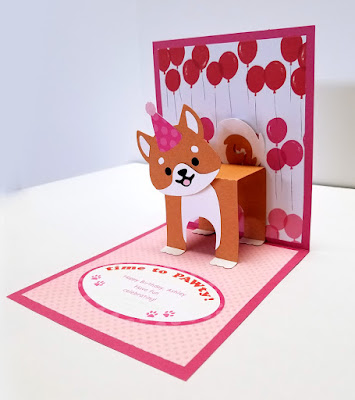 And on the inside....SURPRISE! A pop up "PAW-TY Dog!"  The SVG cutting file for this super fun Pop Up Dog card comes from the Lori Whitlock Shop. I totally love that this was such a simple and easy card to put together and yet so darned CUTE! Lori even has a kitty cat version in the shop if you're more of a cat person. 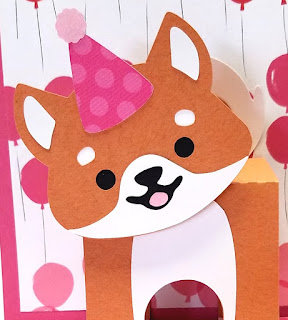 Since my niece owns a Shiba Inu, I swapped the doggie head and tail that came with the cutting file with the Shiba Inu head and tail I had created earlier this year for my Year of the Dog calendars. And finally, of course I had to give my "paw-ty animal" a festive hat so she could "PAW-TY ON"!