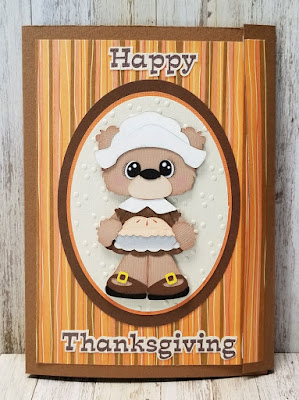 Keeping true to a promise I made to myself when our granddaughter was born, this is the Thanksgiving card I made and sent to her this year. Now that she is 3, she enjoys interactive cards, and I of course enjoy making them for her!
Here's a quick video to show the fun pop up surprise that I put into her Thanksgiving card. 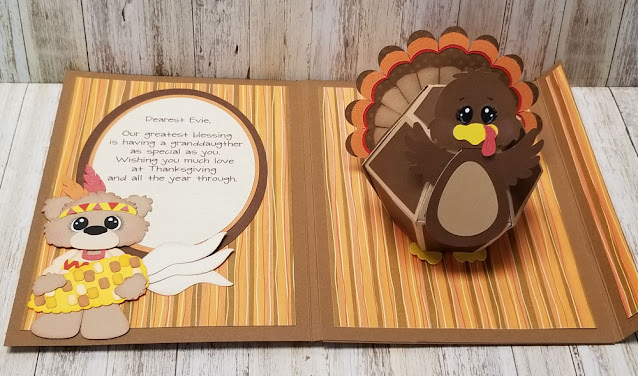 The body of the pop up turkey is actually a rubber band activated hexagonal "ball" created with Karen Burniston's "Surprise Ball Pop Up" die.
I have to admit that when Karen Burniston first released this hexagonal pop up ball die a year ago, I really didn't think I would be buying it. But within a few weeks of its release, creative Karen Burniston fans and crafters began creating and sharing  the cutest little pop up critters, from unicorns to Baby Yoda and more using this hexagonal ball on Karen Burniston's Facebook fan page. It didn't take too long for me to realize I really NEEDED this die after all! 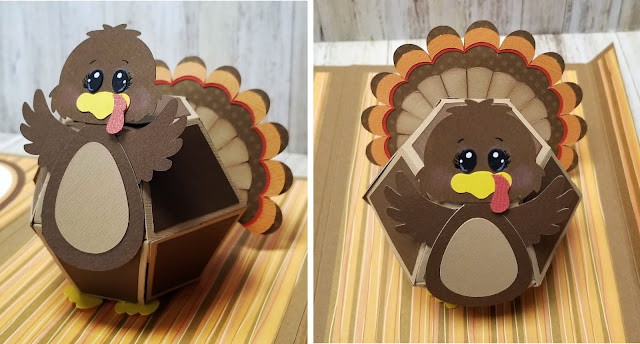 To create my turkey, I used parts from the turkey in Cuddly Cute Design's "Pilgrim Cuties" and glued them on to the hexagonal ball. The ball was then attached to the card with a brad, which allowed the turkey to turn and swivel inside the card. I glued an extra panel of cardstock to the backside of the finished card to hide the brad.
Then to keep the turkey flat and the card closed, I added a flap to the right side of the card and inserted  thin but strong neodymium magnets  in between the layers of cardstock of the flap and front of the card. 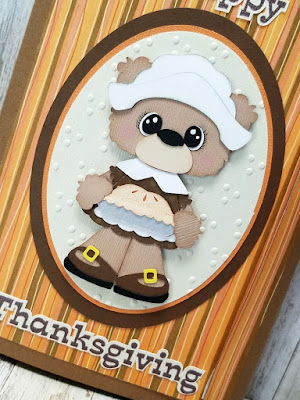 Cutting file for the paper pieced Pilgrim teddy on the front of the card comes from Cuddly Cute Design's "Pilgrim Bears".  She was adhered to an oval panel which was run through the "Three Dots" Sizzix Textured Impressions embossing folder from Birthday Set #2. A double layer of ovals was added behind this to create a frame. "Happy Thanksgiving" greeting was created using Expose font and the print and cut function on the Silhouette. 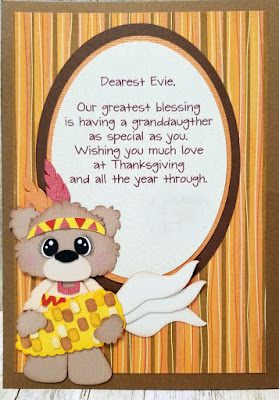 For the Indian teddy on the inside, I used the same teddy bear from the Cuddly Cute Designs "Pilgrim Bears" cutting file together with the Indian costume and corn from another Cuddly Cute Designs file called "Indian Mouse". I really had fun putting this card together and playing with the hexagonal ball pop up. I'm looking forward to experimenting and trying to create many more fun pop up critters with this ball! 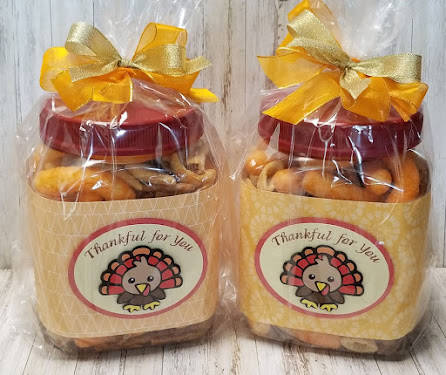 Thanksgiving will be a little different  this year since we'll be limiting our celebration to our bubble of just three of us. Even so, I felt the need to connect with family so I decided to make a batch of Cheetos, Bugles, Fritos snack mix to share with those we'll be missing. 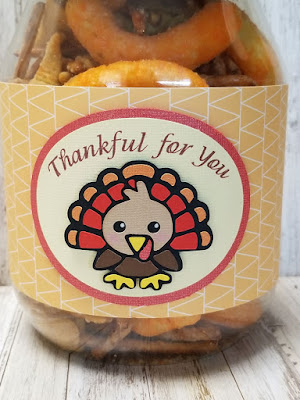 I put the snack mix into recycled  half gallon mayo and nut jars that I had been saving and decorated them very simply with just a band of printed paper and an oval matted label adorned with a cute paper pieced turkey. Slid the bottles into cello bags and added a bow as a final touch to make them look festive. Only had time to make half a dozen of these; really wish I had started earlier so I could have done a second batch. 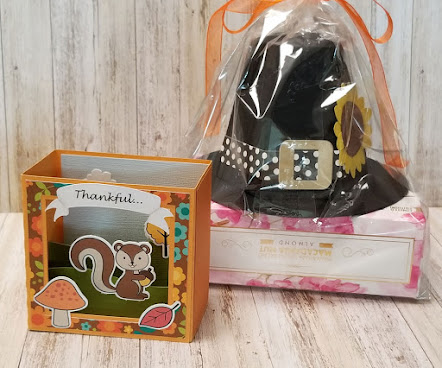 Before I close, I want to share a couple sweet surprises I received from crafty friends this week... 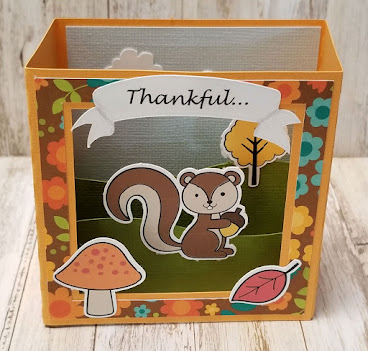 I got happy mail! This adorable Thanksgiving mini shadowbox created by my sweet friend Bev really helped to brighten my day. Cute little squirrel and coordinating fall themed images were created using the print and cut function on her Silhouette and added to to struts inside and on the front of this fun shadowbox card. So darned cute! 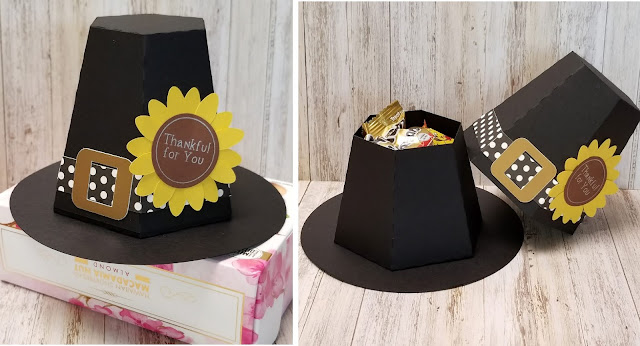 Isn't this Pilgrim's Hat treat box created by my dear crafty pal Lorna the cutest ever?   I love how Lorna made this hat box designed by Snapdragon Snippets extra special by adding  the pretty paper pieced sunflower and polka dot hatband to add a touch of whimsy. "Thankful for You" was sketched onto the flower center by using the pen holder and sketching function on her Cameo... so cool!
Coping with all the changes and precautions needed to keep safe and healthy this year has been a bit stressful at times, but thankfully,  my passion for crafting and keeping in touch with close friends and family has helped a lot. Feeling so thankful and blessed. Happy Thanksgiving, everyone!

The card for your granddaughter is amazing! I love the clever pop-up paper mechanics. Aren't grandchildren the best blessing ever!!!!!!