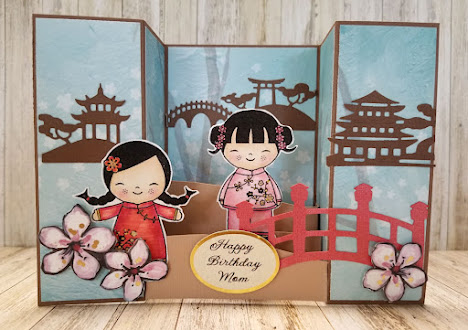 While rummaging through my craft room in hopes of coming up with ideas  for a birthday card for my mother in law, I came across a very old Hero Arts wood mounted stamp set called "Asian Dolls". This set  (which was released by Hero Arts in 2009) was still in it's original packaging, never opened. I decided it was finally time to get these stamps inked up and put to use! 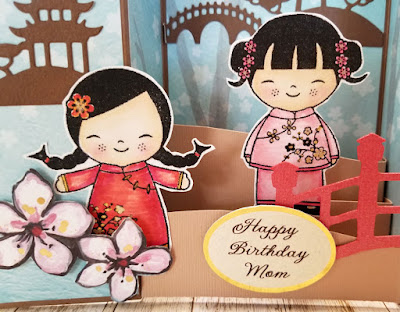 After being kept tightly shut in it's original packaging for over a decade seemed to have caused the foam backing on the stamps to wear down unevenly so I had to remove the stamps from their wood blocks and discard the foam backing. Luckily the red rubber had remained supple so I was actually able to get a pretty decent image using the Tim Holtz Stamp Platform. I chose two of the Chinese girl images for my card, using Copic markers to color them in. 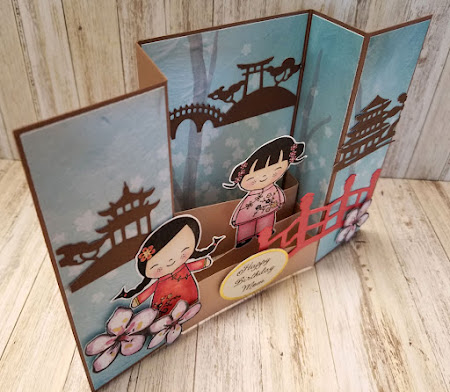 I decided to make a bridge style card, using cardstock from Michael's Recollections "Cherry Blossom" Paper Pad for the back panels. Cherry blossom embellishments were fussy cut from cardstock from the same pad. Bridge die is from Lala Land Crafts. Border die cuts in the background are from Amy Designs' Chinese Landscape and Lala Land's Asian Landscape dies. 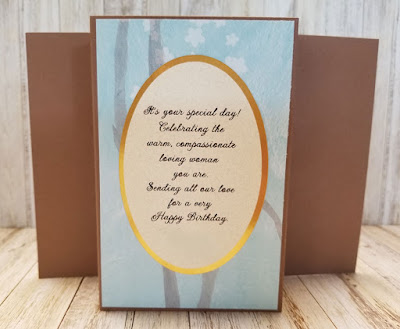 I added our sentiment to the backside of the card using the print and cut function and added a oval shadow layer cut in gold foil.

Oh, she's going to love this card. I'm glad you rediscovered the stamps and put them to good use. Amazing the image part of the stamp did not melt from old age. That's what has happen to some of my wood mounted stamps. I'm not sure if it's the type of rubber used or if a type of ink caused it to deteriorate. Not all the stamps in the drawers had a melt down. I guess it's like people...hahaha! Anyway, I think this card turned out wonderfully. I especially love the bridge component. I'm looking forward to seeing your future creations. Thanks for sharing.