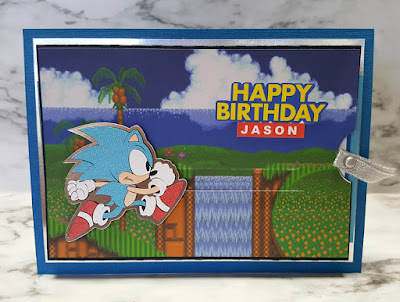 Ready for another fun Triple Slider card? This one was made for my son in law who enjoys playing video games. I don't know much about video gaming other than Super Mario and Angry Birds, but I thought Sonic the Hedgehog was kinda cute so I decided to use him on my son in law's birthday card this year. 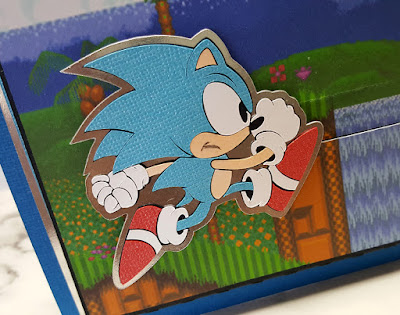 I used a coloring book image of Sonic running to create a cutting file in Make the Cut design program. For the background, I did a Google search for Sonic game backgrounds and printed one I liked to fit my card. Arial Black font and the headline function in Print Shop were used to try to make a Happy Birthday sentiment that looked similar to Sonic's title logo, then I used the print and cut function to cut it out. 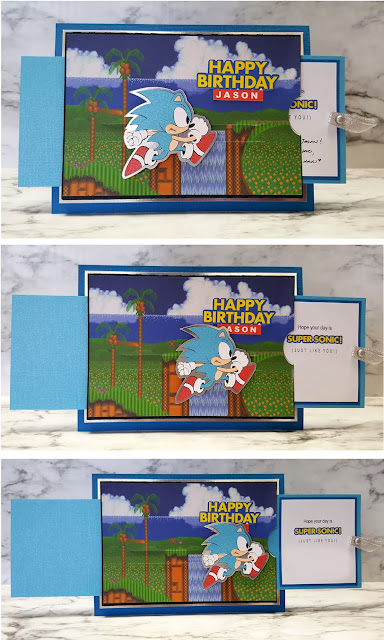 Pulling on the ribbon on the right side of the card makes panels slide out from both ends of the card, and at makes Sonic run across the front of the card at the same time. In case you're wondering, the panel on the left was left blank because I still didn't have the gift card I intended to put on it! I was really hoping to purchase a Sonic Drive In gift card to put on that left panel... now wouldn't that have been so cool? Unfortunately I couldn't find anywhere that sells them. We don't have a Sonic Drive In here where I live; I tried calling them but they wouldn't take a phone order for a gift card. So my son in law had to settle for an Amazon gift card instead. Lol, I'm sure he preferred that anyway.

You go girl, another super fun creation that beats any Hallmark card! I'm sure your son-in-law got a big kick out of this card.

Such a cute card. Are there directions on how to make a triple slider card?

If you are interested, please email me so I may direct you to where you can get a kit with instructions.