For My Daughter, the Bride to Be... 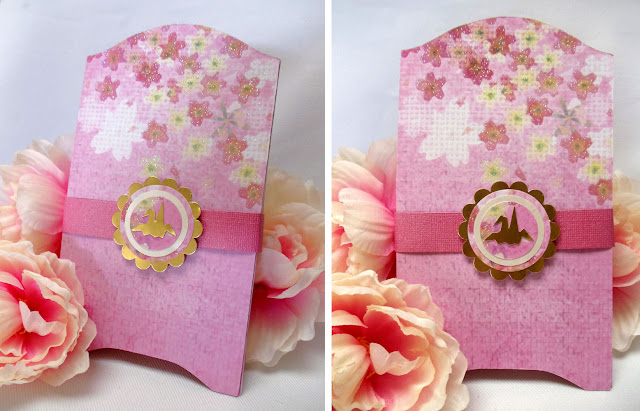 So here it is finally...my version of the neat-o tri-fold screen card created by Aunty Mollie a long while back! I wanted to do a special card to include with dd's shower gift, so I finally sat down with Aunty Mollie's beautiful card to try and figure out a way to come up with something similar. Using her card as a template, I traced the shape of the base card onto a piece of paper, scanned it, then had MTC trace it into a cuttable file.
Here's how the card looks on the inside after removing the belly band... 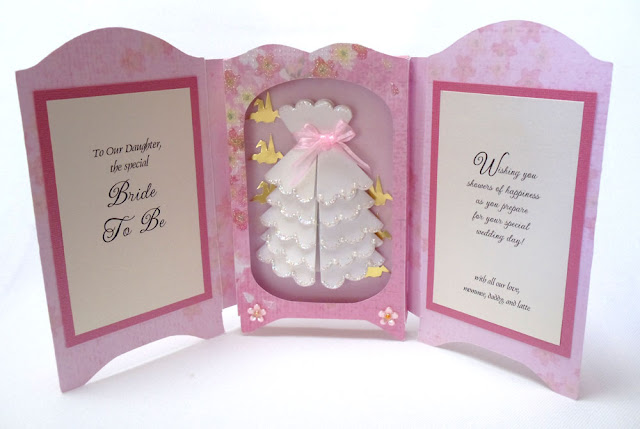 I think the hardest part was to get a cuttable file for the frame on the inside of the card that would fit just right and allow the two sides of the card to close nicely flat. It took a bit of fiddling around, but I was finally able to size the frame so it would fit. 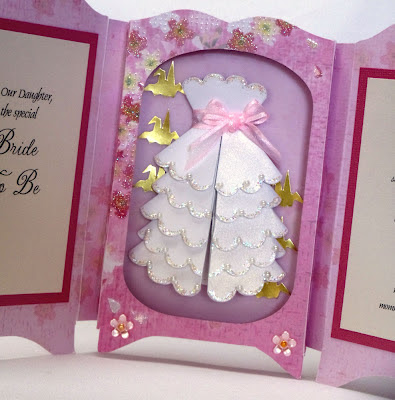 Wedding gown inside the frame was put together with scallop circles cut from ice gold text weight paper using dies from the small and large set of Nestabilities. These were then folded and layered by adhering one inside the other. Scallop edges were then stickled and embellished with pearls.

Just about the time I was putting this card together was about the same time we had just finished folding the 1001 origami cranes for dd's wedding... And since I wanted to add some Asian flavor to my card to go with my mom's Asian themed shower centerpieces and favors, I decided to use my Carl Craft origami crane punch to punch out a few gold cranes to add behind the dress and to the bellyband. The resulting finished card was nowhere near as awesome as Aunty Mollie's, but dd seemed pretty happy with it!
Ok, I guess that wraps it up for the wedding shower stuff...now on to the wedding preparations!

You must have spent a lot of time working on creating this card -- it is beautiful! May your daughter's wedding day be as gorgeous as this card.

Glad to see you amde one of these wonderful cards - wow - what a gorgeous project. It turned out really nice!!!!
hugs, P

Sorry... I removed my first comment because I did not read your post closely and thought that the card was for you daughter's wedding invites. Since I did not read it close enough I thought it would be best to rewrite my comment. The card that you made for your daughter is more beautiful than words can begin to express. I am sure that she was touched by what you made for her. It must have taken you a long time for you to make it.

Oh Eunice, this is just the sweetest and the most elegant card for your daughter. I luv all the details and all the luv you put into making the card. :)

Sorry for not being more present here in blogland. My time is so limited and "FREE" time is non-existent these days. Have a great weekend!

Oh. My. Gosh, Eunice, this is a STUNNING wedding card you made for your daughter's wedding day! It's the most beautiful, elegant wedding card with an Asian flair and that wedding dress you made out of the scallop punches is gorgeous! How very, very clever of you. I can see all the love you put into this card for your DD! She should frame this!

Such a sweet card! I've been meaning to make that dress from the scallop circles- love your version of it!! Such a cute idea to put it in a "wardrobe"! Hope the wedding went well and you have time to relax now.

What a beautiful card Eunice!!! Amazing how it comes together. Not sure when the wedding is but congrats to your daughter and new hubby! My son's wedding will be coming up soon too.

I haven't been blog surfing for a long time.I discovered your site again and was blown away by all your breathtaking creations. Now I will have you on my permanent list so I don't miss any of your posts. Thank you for raising my artistic mind to new heights.

Hi Eunice...I just didn't want to wait until we got home to stop by to say hello! This card is GORGEOUS! Everything about it is PERFECT! A true keepsake. I LOVE what you've done with the dress, it is so elegant!

Wow Eunice! Another masterpiece done! Love the beautiful card you made for your daughter. The wedding gown is fabulous!!