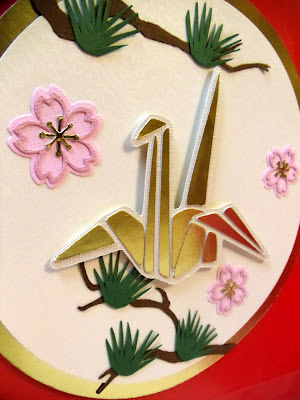 When dd and her fiance decided to have their wedding in Hawaii, we were so pleased! After they had selected their venue, the first thing we worked on were the invitations. More about that later... The second project I wanted to get started on right away was the folding of her 1001 origami cranes. Known as a wedding tradition in Hawaii, originating shortly after World War II, the 1000 origami cranes or "senbazuru" is said to bring the newlyweds a thousand years of happiness, and the 1 last crane is for good luck.
Realizing this would take quite a bit of time to finish, I wanted to get started early. I recruited the help of friends and family and together with everyone's help, including dh (yes! he's an expert at it and folded over 300 of them!) we had over a thousand cranes folded in two and a half months. Yay! 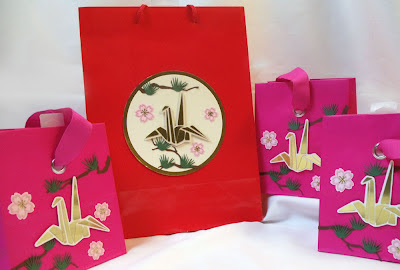 As thanks and appreciation for everyone who helped, we filled these decorated bags with yummies.The tsuru or origami crane cutfile is the same one I created in MTC and used on a card earlier last year. This time I used metallic gold cardstock to cut these out and used vinyl transfer tape to remove the cuts from the mat. This assured that all the many pieces of the crane would stay in their correct positions when I transferred them to its' shadow. Sakura were cut using the sakura and sakura outlines dies from WikiCAPS, branches are a die from Quickutz and pine tufts were hand cut.
Once again, thank you for everyone who helped to fold cranes. It was so good to get these done early and not have to worry about it!

Wow that's a lot of cranes... but the end result is so pretty, love how you did the gift bags....
Congrats to DD and fiance how exciting to start prepping for the wedding...Good luck~

Hey Eunice, so nice to see you the other week!!! I see you've really been busy. I hope that box you bought worked out for you too.

The wedding treat bags were awesome. I need to learn about that transfer tape. The projects you posted on previous days are fantastic too! Thank you for giving me a dose of 'happy crafting'.

love crane gift bags! love how they turned out. great job on folding all those cranes. love that Japanese traditions. so much fun! have a wonderful weekend!