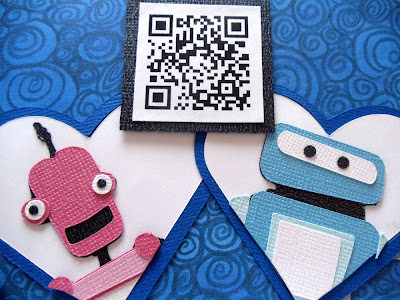 Not too long ago, one of my favorite bloggers, Carol of Extreme Cards and Papercrafting posted a project where she wove strips of paper together to replicate a QR code birthday message for a friend. The weaving project was way out of my league, but the novel idea of using a QR code (Quick Response code) to send a message really had me intrigued! That's when I knew I just had to do a "techie" anniversary card for my geekie dh...﻿ 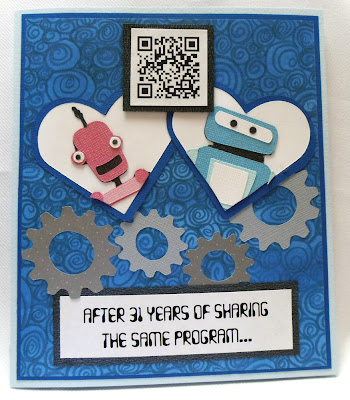 I went over to the QR Code Platform site recommended by Carol to generate a couple of messages, printed them out and added them to my card. The QR code reader is a free app dh has on his Droid, so when he scanned the code on the front of the card with his phone, the message  "Happy Anniversary!" appears. Very cool! To keep with the techie theme, I used robots from the Robtz cartridge to represent the two of us. Cutfile for the gears were created in MTC using an image found on the web.

Then to add to the silliness, I used a slider on the inside of the card so the pink robot would slide on over to get closer to the the blue robot as the card is opened. You can find the instructions for this "Moving Card" shared by Lynn  from Ben Franklin Crafts on her blog. Thank you, Lynn! 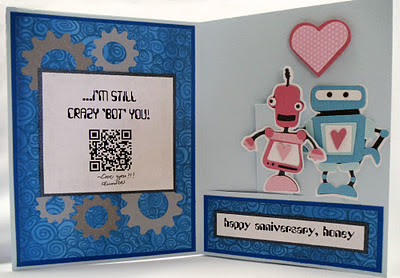 Lastly, I added my second QR code ("I Love You!") to the inside of the card. Wow! I can hardly believe that we've been married for 31 years already....it's been a wonderful journey and I'm so very fortunate to have spent it with my best friend!

Hi Eunice~
Congrats on your anniversary...
Awww those robots are only so cute.. love how you made them to move around.... They are adorable pink/blue and with hearts - so precious... You have many more years to cherish together...
hugs:)

fantastic card love it
hope you have good anniversary