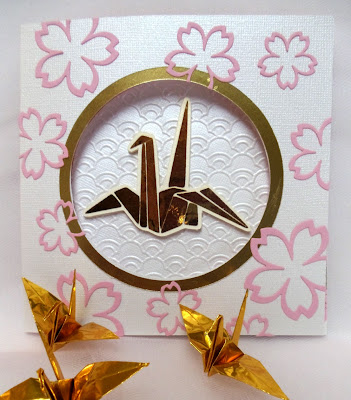 Although sometimes I think I'd like to, I don't usually create cards for challenges or blog candy, mostly because I can barely keep up with all the cards I want to make for my own personal giving. I guess I'm a very s-l-o-w crafter, I'd say on an average, it takes me 5 to 7 days to finish just one card! That's why you speedy crafters who share  cards and projects daily on your blogs just blow me away and amaze me! 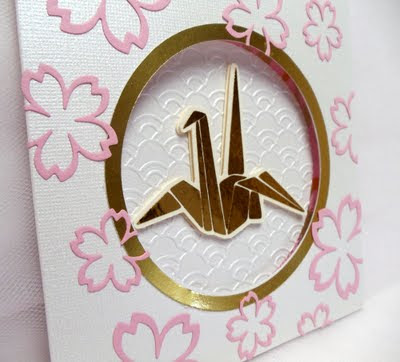 Okay, so this card is my one exception. When Wiki CAPS released their second die in August, Brian at Photocraft offered a 20% discount off his new sakura die to everyone who brought in a card created using the first release sakura outlines die. Did you say DISCOUNT?  LOL! Suddenly I had time to make an extra card! Kept it real simple and easy...got this one done in two days!
This gave me a chance to try out an image of an origami folded crane (orizuru) found a while back on the internet which I had been saving to do a cutfile of. Had MTC trace the image and create the shadow for this. Used gold mylar sticker paper for the cut, then transfered it to it's shadow using vinyl transfer paper. 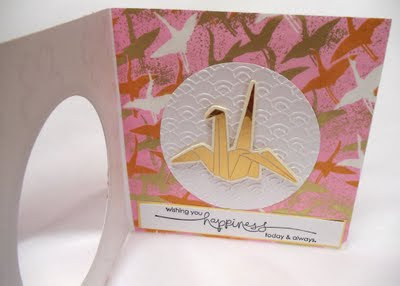 Layered the shadow of the crane a couple times for dimension and placed it onto a circle embossed with an embossing folder from the Cuttlebug Asian bundle. Round window and gold foil frame were created using MTC's basic shapes menu.
Used my Wiki CAPS die to do the various sized sakura outlines to embellish the front of my card and added pretty yuzen paper (thank you, Patti!) for the inside. Stamped sentiment is from Stampin' Up's "Heard from the Heart" set. 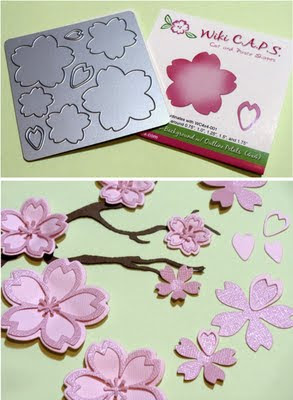 Here's a photo of the Wiki CAPS new sakura die, which coordinates with the sakura outlines die which was released earlier. If you look closely, you'll see the flowers on the new die are just a tiny bit larger than the outline die, which gives the sakura an unique layered look when used together. To receive 20% off the price of this new die, all you need to do is take in a card you've created using the sakura outlines die to Photocraft before the end of this month.﻿

Beautiful cards. I like that crane image, too. Thanks for showing the actual die and example cuts of the 2nd Wiki Caps Sakura die. I found your blog a few weeks ago thru Sister Stamps and first learned of Wiki Caps dies from you. I've been wanting to order the Sakura outline die (I live in CA). It's a good thing I haven't yet because now I can order both dies. It's too bad Brian doesn't offer these died online. Thanks for sharing.

Hi Eunice!
I had such a great time today. Thank you so much for all the goodies. When I went to photocraft, I saw this sample and I knew it was your's! So detailed and perfect! Darn- forgot to make a sample to get my 20% off!
Talk to you soon!

This is such a beautiful card! I love the asian theme. Your cards are always amazing. Great job! :-)

Hi Eunice! Your sakura outlines card is gorgeous and that crane is beautiful sitting on the inside. Your cards are so detailed and done to perfection...impeccable work! I like how you showed the solid and outline die-cuts together and they look good with the solid being a little larger. Can't wait to see what else you create. Your projects are all beautiful!

Hi Eunice,
OMG, that is such a classy and elegant card. Must look into the Wiki Caps Sakura die.

Such an elegant card Eunice!
You are always amazing with those Asian style cards...
Hope you had a great weekend!